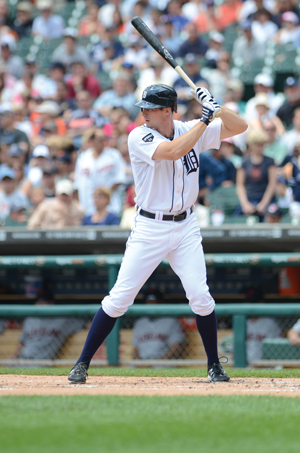 Don Kelly’s first-inning home run in Game 5 of last season’s American League Divisional Series is without a doubt the highlight of his career—so far. The heroic moment helped set up the Detroit Tigers to defeat the New York Yankees and advance to the AL Championship Series. People who watched Kelly grow up here in Mt. Lebanon were thrilled but not surprised. From his days as a kid on Kenmont Avenue to his high school years helping lead Mt. Lebanon to the 1998 PIAA AAA State Championship, Kelly positioned himself to play on baseball’s biggest stage. But achieving that goal has not been easy.

In high school, Kelly sometimes played second fiddle. His teammate, Josh Wilson, now a shortstop with the Atlanta Braves, had better offensive statistics and was named Pennsylvania Baseball Player of the Year in 1998. Kelly’s ability did not go unnoticed, however. He went on to play for Point Park College (now Point Park University), where he was drafted by the Detroit Tigers in the eighth round of the 2001 Major League Baseball Draft. Kelly endured a lengthy stint in the Tigers’ minor league system, recording accolade after accolade and coming close but never making the Tigers’ major league roster. So in 2006, the Tigers made Kelly a free agent, opening the door for a fresh start with his hometown Pittsburgh Pirates.

After working his way through the Pirates organization, Kelly finally made his major league debut in 2007. But after batting just .148 over 25 games, the Pirates designated him to AAA Indianapolis and released him at the season’s end. His time back in Pittsburgh wasn’t all bad. While here, he married his wife, Carrie. They now live in Mars, Pennsylvania, and have two sons (Brett, 3, and Luke, 1). Carrie is no stranger to major league baseball. Her brother is Pirates’ second baseman Neil Walker. After spending the 2008 season in the minor leagues with the Arizona Diamondbacks organization, Kelly made his return to where it all began, the Detroit Tigers. There, his career started to come together. Now managed by Jim Leyland, Kelly has the backing of a man who truly believes in his talent. Leyland has allowed Kelly to play all nine positions on the field, including catcher and pitcher. Only a handful of players have ever accomplished the feat of playing every fielding position. Jose Oquendo (Cardinals) and Shane Halter (Tigers) most recently played every position, but Kelly is the only current player to have done so in the majors.

“I didn’t know it at the time, but [being able to play all positions] is something I enjoy being able to say,” Kelly says.  “Skipper [Leyland] is really great—he keeps me fresh.  He backs me.” The Pirates’ Walker couldn’t be prouder to call Kelly his brother-in-law. “It’s impressive to see Donnie get his opportunity at the major league level with the Tigers,” said Walker. “He has definitely earned everything he has. “ The road to success has been a bumpy one, and Kelly knows the future will continue to challenge him. “You have to work hard every day, and it is ever changing,” he says. “I’ve always said if you work hard, you will get what you want. I’m very excited to be at this point in my career.” He attributes much of his success to his roots. “Mt. Lebanon is a great community,” Kelly says. “Every child has every opportunity to be successful. when attending this school district. It’s a great place to grow up.”