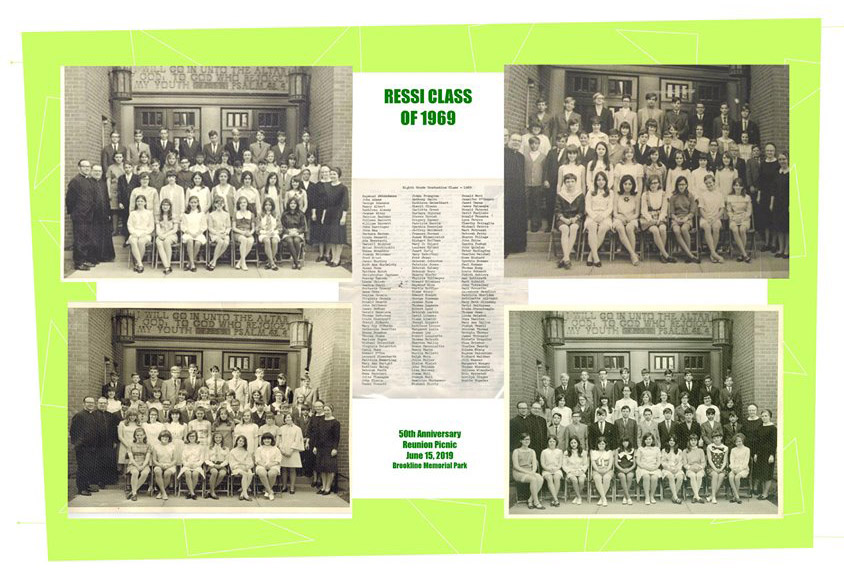 In 1969, while the Vietnam War was raging on Earth and astronauts were strolling around the moon, and while the Manson Family was snuffing out lives in California and hippies were grooving to the music at Woodstock, in my unperturbed, working-class neighborhood of Brookline, I was immune to what was happening elsewhere and focused instead on finally graduating from the eighth grade at Resurrection School.

With mixed emotions and shaky expectations, I looked forward to attending Elizabeth Seton High School in the fall, but with vague regrets I also looked backward at the passing of childhood.

Time has a sneaky way of vanishing almost imperceptibly. Has it really been 50 years since I marched up the aisle in Resurrection’s gym to collect my grade school diploma?

When I heard about a reunion being planned for our eighth-grade class at Brookline Memorial Park this summer, I was swept up by the prospect of seeing people whom I hadn’t seen in half a century.

The night before the reunion, some of us met at the front steps of the Church of the Resurrection on Creedmoor Avenue for a class photo, the same spot where we took our eighth-grade homeroom pictures. I recognized almost everyone who showed up, despite the merciless assault of time—a few pounds here, a few wrinkles there, a couple of bald heads and beer bellies, and one or two knee replacements thrown in.

For the photo, I had an eerie déjà vu feeling when I took my usual spot in the front row, still being one of the shortest people in the class.  We posed the same way as we did for our graduation pictures, except this time, we weren’t under the watchful eyes of the pastor Father Keefer, the principal Sister Harold Ann, and the homeroom teachers like Sister Miriam Dolores and Sister Bernardine Marie. 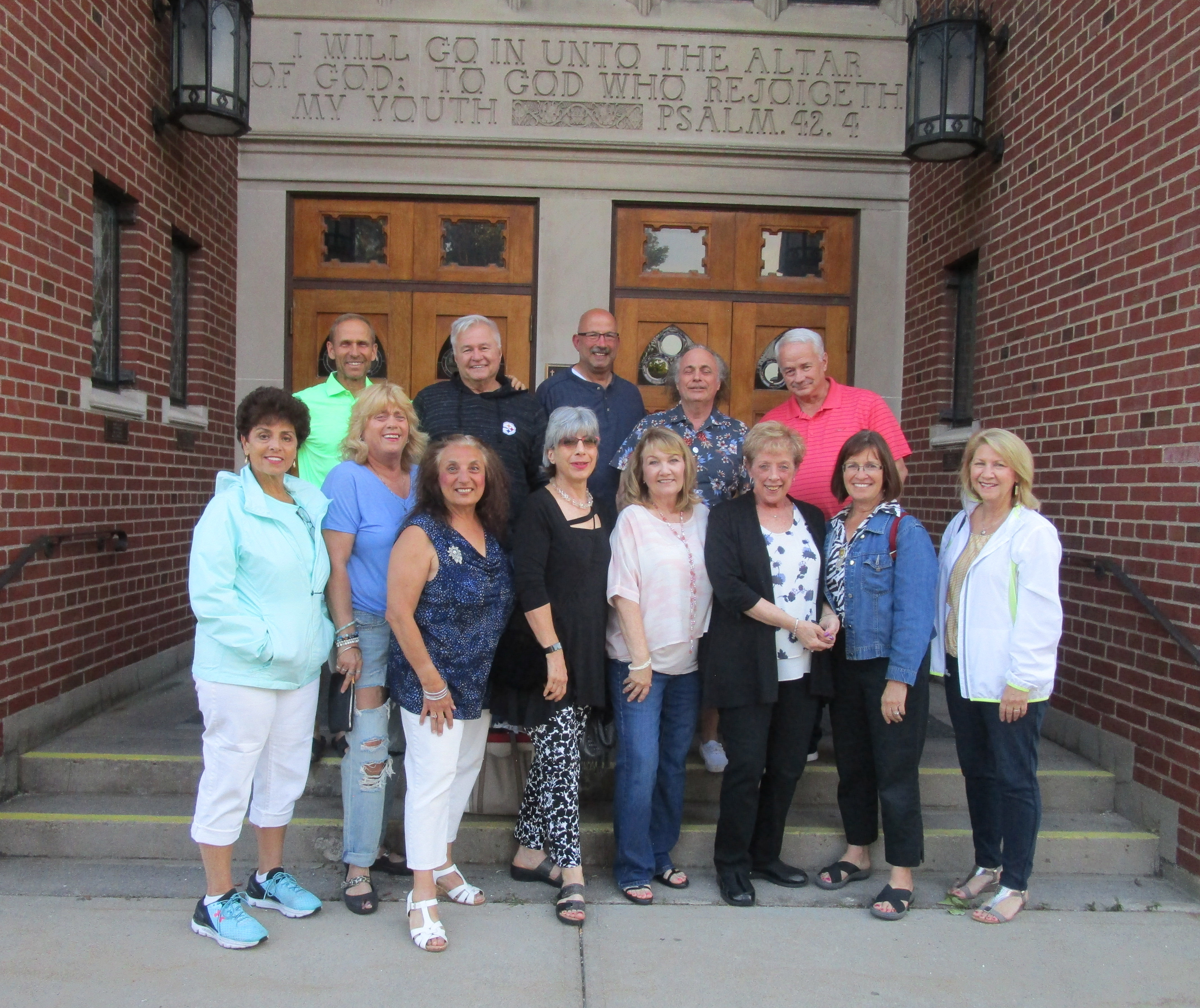 After the photo, I enjoyed sauntering down Brookline Boulevard and playing a nostalgia game on our way to the Moonlite Café. Supplied with a list of old establishments on Brookline Boulevard from the 1960’s—including Isaly’s, Newsies, Melman’s, Blue Bonnet Bakery, Bryant’s Hardware, Stebbrook Pharmacy, Joe’s Tavern, the Boulevard Men’s Shop—everyone had to guess what businesses are there now. My classmates had phenomenal memories and correctly matched the previous owners with the present occupants.

At the picnic the next day, I was curious to see if any of the boys I had crushes on in eighth grade would come. None did.  No matter.  It was tons of fun reconnecting with the many classmates who did attend.

We swapped stories about how the nuns and teachers disciplined us when we misbehaved in grade school. The Sisters of Charity weren’t always as charitable as their name implied. They never skimped on corporal punishment, smacking knuckles and rumps with a sturdy ruler or shoving them into the blackboard.

My third-grade teacher once picked me up by my collar and threw me into a corner because she disapproved of the way I covered my books.  She also forced me and another girl to kneel down on the cold, hard, unforgiving wooden floor for an hour because we were talking in class.

Some classmates recalled a favorite male pastime in those days—dumpster-diving for old Playboy magazines in the alley behind Sam’s Hardware. Altar boys proved especially adept at this.

It was sobering to learn that 13 members of our class have died. I was also saddened to hear about the inevitable misfortunes experienced by members of our class—divorces; deaths of spouses, children, and other family members; disabilities and chronic medical conditions; all of which, regretfully, are part of our collective human struggle.

Still, we were grateful we grew up in Brookline and that our school days were somewhat insulated from the chaos which defined the 1960s for the rest of the country. When riots, assassinations, and demonstrations were on the nightly news, Brookline stayed under the radar.

Especially in that decade, attending Resurrection School in Brookline was like living in a protective bubble, albeit a restrictive, prison-like one. And I’m certain that Sister Harold Ann and her crack team would have tossed anyone who tried to stir things up in that bubble, particularly during the crazy, paradoxical year that was 1969.