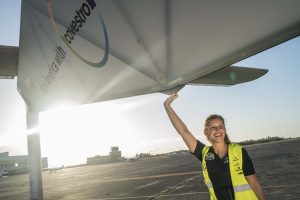 Did you know that a Boeing 747 airplane burns through approximately one gallon of fuel every second or roughly five gallons per mile? Basically, a Boeing 747 uses more fuel in one hour than most cars use in an entire year. Now imagine a plane that uses no fuel. It makes no noise, it has no carbon footprint and is powered 100 percent by the rays of the sun.

The plane is called Solar Impulse 2 (Si2), and it is a real-life project that began with the vision of a solar-powered plane and has recently culminated in a historic journey around the world. Paige Kassalen, a 2011 Mt. Lebanon graduate, brings this significant expedition close to home after joining the Si2 catching crew in February. Right now, she is in Egypt assisting the plane on the final leg of its journey back to Abu Dhabi.

“We are able to fly around the world powered solely by the sun and technology…When I graduated college, I had no idea that something like this even existed,” says Kassalen, who graduated from Virginia Tech with a degree in electrical engineering in May 2015. “It makes you wonder why we aren’t doing more things like this. There could be more solar power, more hydro power and more clean technology. Now our job is just to figure out how to implement them.”

From inspiration to expedition

Solar Impulse is the brainchild of Swiss explorer Bertrand Piccard, who got the idea for a solar-powered airplane in 1999 after completing the first non-stop around-the-world balloon flight in the same year (fun fact: it is believed that Captain Jean-Luc Picard from Star Trek: The Next Generation was named for the explorers in Bertrand Piccard’s family). He worked with André Borschberg, fellow Swiss aviator, engineer and entrepreneur, to conduct a feasibility study, gather funding and begin construction of the original Solar Impulse model, which completed the first intercontinental solar flight across the Mediterranean to Morocco in 2012.

The around-the-world Si2 flight departed from Abu Dhabi in March 2015. It stopped in Muscat (Oman), Ahmedabad (India), Varanasi (India), Mandalay (Myanmar), Chongqing (China), Nanjing (China) and Nagoya (Japan), before embarking on a flight over the Pacific to Honolulu in July 2015—a trip that lasted five days and five nights, marking the longest solar flight ever achieved.

The plane’s lithium-polymer batteries overheated on that journey, requiring extensive repairs, and then the team had to wait through winter’s weak sun rays, causing a six-month delay in the expedition.

Kassalen joined the team in Honolulu this February while they were preparing for the next flight and final leg of the expedition. She has since traveled with the plane to San Francisco, Phoenix, Tulsa, Dayton, Lehigh Valley, New York and then over the Atlantic to Seville, Spain and Cairo, Egypt. Now, she and Si2 have one final trip back to Abu Dhabi to complete the around-the-world expedition. 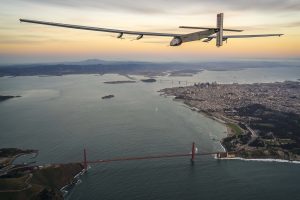 Kassalen does not ride in the plane because there is no cabin on Si2 for passengers. Actually, there is only enough room for one person—the pilot. Piccard and Borschberg alternate in that role.

In theory, Si2 can maintain perpetual flight, so the plane’s only limitation is the pilot’s endurance. Both Piccard and Borschberg have been trained to stay alert through self-hypnosis and yoga, and they have adapted to sleeping in 20-minute intervals while piloting the plane. They have also become accustomed to a cockpit that is unpressurized and unheated, with a toilet, parachute and lifeboat integrated into the pilot seat. Even the food they eat is adapted in a research lab to suit temperature and pressure conditions.

Si2 has some irregularities outside of the cockpit as well, making it difficult to compare to the average airplane. Si2 weighs 5,100 pounds, which is less than an average large truck or SUV, and has a wingspan of 236 feet, making it larger than a Boeing 747. Its landing wheels are also aligned vertically (like a bicycle).

Kassalen’s job is critical, as Si2’s design causes it to require more human assistance than a regular airplane. During takeoff, Kassalen runs or rides an electronic bicycle next to the plane to help keep it stable as it gathers speed. Then when the plane lands, she uses a long handling mast to grab the wings and hold the plane down before taxiing it to the hangar. Her electrical engineering skills also come into play between flights as she helps out with repairs and other tasks around the hangar.

“It’s really cool for me and the other women on the team to be able to break gender stereotypes,” says Kassalen. “But all of us [on the catching crew] are showing younger boys and girls that you don’t really have to be what everyone’s stereotypical image of a job is. We are really breaking the barrier of what you imagine in an engineer, doctor, chemist…”

Kassalen is one of only three women on the 16-person catching crew and the only American. “One of the interesting challenges that I have encountered is the language barrier,” she says. “When I joined the team in Hawaii, I felt like I could have been in Europe, because most of the crew speaks French…I was very lucky because I took French at Mt. Lebanon High School, and I’m actually applying those skills now…The experience is really cool because then it gives you the perspective to learn about different cultures and how to work and interact with them. It takes you out of your comfort zone.” 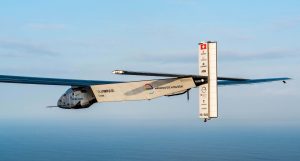 What also separates Kassalen from the rest of the catching crew is the fact that she is the official Covestro representative on the Solar Impulse Team.  After interning with Covestro in college, she accepted a job there after graduation in May 2015 and had only just finished Covestro’s training rotation program when she was encouraged to apply to the position on the Si2 ground crew.

Covestro is a Solar Impulse partner, meaning that Si2 is outfitted with many of the company’s materials. “You can’t be a partner unless you can prove that you have the best material out there,” says Kassalen. “Our most lightweight and efficient materials were chosen for the plane.”

As a partner, the company was invited to give one of their employees the chance of a lifetime to join the Si2 team. Covestro was looking for someone with an engineering degree, public relations skills and a willingness to travel. “When I was in college, I was part of different organizations that taught me about public speaking, so I was the lucky engineer selected to join the Solar Impulse team,” says Kassalen. “For this reason, I always encourage students to get a set of multidimensional skills that can be part of any career.”

Specifically, some of Kassalen’s extracurricular activities included her time as the chair of the Institute of Electrical & Electronics Engineers (IEEE) student branch at Virginia Tech and then later as the co-chair of the IEEE Women in Engineering Pittsburgh branch after graduation.

Her public relations skills are constantly exercised on the Si2 team. An important part of her job between flights is to use Facebook, Instagram and other social media outlets to publish updates for Covestro employees and the public. 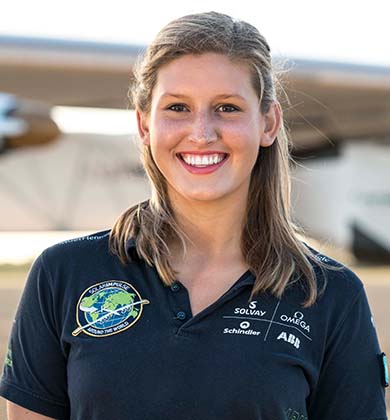 Kassalen and Covestro in the community

Her favorite between-flights task, however, is participating in community-outreach programs, including Covestro’s I3 STEM program (standing for Ignite, Imagine and Innovate), which is designed to help inspire young students to pursue a career in science, technology, engineering or math.

“We organized an I3 STEM event when the plane was in New York City, and some of the Pittsburgh team came up to help put it on…We always do science experiments that use materials that kids could find around the house and do at home. This time, we used Elmer’s  glue [and other household materials] to create a fun putty, like play dough,” says Kassalen. “It was cool because what we did there is symbolic of what the plane is doing. The goal of Solar Impulse is to show that we can take some of the technology available today and put it all together for a really great project. It was cool to show the students that this is what the future could be like.”

The final leg of the Si2 expedition back to Abu Dhabi could begin any day now, depending on weather conditions and any necessary repairs after the 71-hour trip across the Atlantic (also the first of its kind) that departed from New York City June 20.

“I’m not officially sure when I will be done with it, but I will be returning to Pittsburgh once the trip is over,” says Kassalen. “I am very excited to see what I will be doing next for Covestro. Now that I have joined the Solar Impulse team and learned about what is out there, I am looking forward to continuing to learn, grow and make a difference.”

The return back to Pittsburgh will be bittersweet for Kassalen, who is having the time of her life on the Si2 catching crew but has developed a deep appreciation for her upbringing on Mayfair Drive. “I think now, looking back, that the Mt. Lebanon education system gave me a lot of opportunities to get me where I am, and I am very thankful for that. We were required to take languages, I had the opportunity to take engineering electives and STEM courses, and I really feel that they helped me to get where I am. I can’t imagine what this experience would have been like if I hadn’t gone to Mt. Lebanon High School.”