It literally was a dark and stormy night—a snowy stormy night to be exact—in 2001, when Karin Mayr had her first jewelry party, at St. Paul’s Nursery School in Mt. Lebanon. At the time, she was a representative selling Austrian crystal jewelry and living in Upper St. Clair. She didn’t know many people in the area since she worked internationally and what little free time she had she spent with her husband, Konrad, and three young daughters. But a friend who taught at St. Paul’s suggested having a jewelry sale fundraiser for the nursery school would be a good way to introduce women to the products. “I wasn’t even certain it would work,” says Karin.

So there she was, selling her jewelry in her mink outside in the cold, as moms in sweat suits hopped in and out of SUVs in mounds of snow. By the next weekend, she had booked six or seven parties and was on her way to starting her own line of crystal jewelry called Sabika.

Sabika, which is sold exclusively at home parties through 600 sales consultants, has since exploded with 60 percent annual sales growth, yearly sales of $20 million and average party sales of $1,250 (that’s $183 per party guest!)—about 30 percent more than the average home jewelry party, Karin says.  The pieces contain Swarovski crystals and are handmade by women artisans in Europe. Parties are low key, with no sales presentation, just jewelry to try on.

Now based in a crisp white and crystal workspace in Robinson Township, Sabika has another Mt. Lebanon connection: Karin’s daughter Alexandra Mayr-Gracik, the company’s VP of marketing and design, who lives on Florida Avenue with her husband, Jeremy, and her children, Cosmo, 10, and Audrey, nearly 6.

Alexandra is Sabika’s head designer, and while her mother sets the stage for each season’s collections by researching fashion trends internationally and in New York, it’s Alexandra, a lithe, tall, former ballerina, who uses her art background and training at the Fashion Institute in Vienna to create the pieces. The heart of the collections are candy colored chokers in various sizes, augmented by vintage-style pieces of hand-soldered pressed metals, pearls and pendants. Some pieces even feature the crystals set in reverse, causing one industry professional to tell her “Mr. Swarovski would turn over in his grave if he knew you were using the crystals backwards.” The practice lends a matte look to the stones, allowing your eye to rest between all that sparkle.

Alexandra’s office is a reflection of her classic style: a photo of Audrey Hepburn sits near a beautiful crystal tiara. She says it’s easy to work with her sister and parents because they all truly love each other. Karin admits her daughter’s laid back nature doesn’t hurt. “I’m the middle child so I’m always trying to be the peacemaker,” Alexandra says. 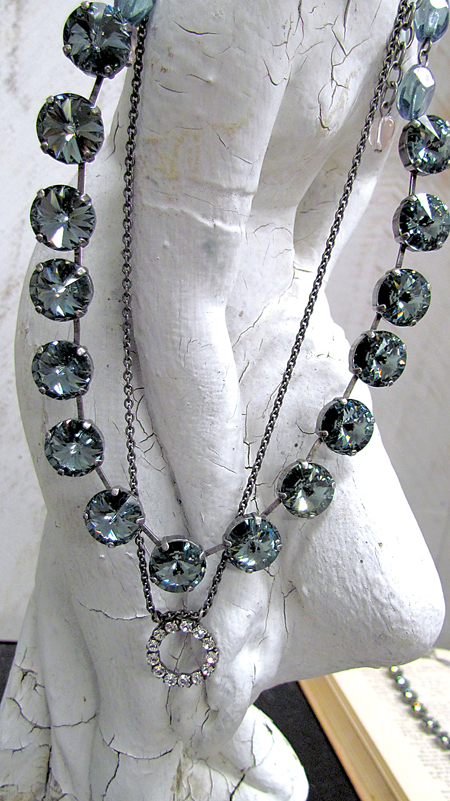 Alexandra brings decades of international flair to Mt. Lebanon. Her mother is German, while her father is Austrian, but she and her sister Kerstin were born in Brazil. They moved back to Austria but by the time Alexandra was 4, they had moved to Upper St. Clair, where she remained for the rest of her childhood. (Kerstin Mayr is the company’s VP of sales and field services. Their youngest sister, Miriam Mayr, lives in Vienna and is a musical theater actress.) All three daughters are Sabika catalog models. Not to be outdone, her father is the company’s VP of operations and finances.

Sabika has a large charitable component. In 2012, they raised more than $290,000 for Komen for the Cure and the National Breast Cancer Foundation through “Pink Parties.” They also support the Ronald McDonald House of Pittsburgh and ChildLaw Services in West Virginia.

Karin may have moved on to national renown and awards—she recently received Ernst & Young Entrepreneur of the Year award for the Pittsburgh/West Virginia region—but she has never lost her Mt. Lebanon connections. Diversity is one of her favorite things about Mt. Lebanon. “You have wealthy. You have not so wealthy. You have not wealthy. It just creates a different spirit,” she says. “It’s still a loyal following I have there. Women in Mt. Lebanon care a lot about their appearance.”

And women are at the heart of Sabika, a company whose original slogan is “a company by women, for women.” Karin, who worked in the textile industry creating fabrics for Donna Karan, Armani A/X and Banana Republic, was drawn to crystals because they go with a woman’s other jewelry, such as engagement rings and watches and they sparkle. “Crystal does beautiful things to your skin.”