Looking back at his boyhood, Todd Kniola, Parkridge Lane, says scouting played a key role. Scouting built his confidence and expanded his skills. It allowed him to face and overcome challenges and believe in himself. And it showed him how to work as part of a team.

For more than a century, scouting has given boys and girls the opportunity to make friends and experience new things while learning life skills and preparing for successful futures. Today, as scoutmaster of Mt. Lebanon Troop 284, which meets at Beverly Heights Church, Kniola is one of the many Mt. Lebanon adult leaders who are helping scouts improve themselves and serve their community.

Many children try scouting but eventually turn their focus to other activities.  Those who stick with it through middle and high school often end up striving for the organizations’ most prestigious awards, the Boy Scout Eagle Rank or the Girl Scout Gold Award. This year, several Mt. Lebanon teenagers received these awards—impressive accomplishments worth celebrating.

The Eagle Scout rank is the pinnacle of the Boy Scout experience, requiring the scout to have held leadership positions in the troop, earned at least 21 merit badges, and finally, completed a service project to help their community, church or school. Kniola’s Troop 284, which dates back to 1930, has produced more than 100 Eagle Scouts with most of their service projects done in Mt. Lebanon.

“When I think about the amount of trail maintenance, information pavilions, benches, footbridges, and other public works that must have been accomplished over 100 projects, it’s hard to overstate the impact scouting has in our community,” Kniola says.

Maxwell Ernest, Troop 28, became an Eagle Scout recently. His leadership roles in the troop, which has been part of Bower Hill Community Church’s ministry for 63 years, included Den Chief, Troop Guide, Assistant Senior Patrol Leader, Senior Patrol Leader, and Junior Assistant Scoutmaster. Ernest, Parkview Drive, earned 44 merit badges—more than twice the requirement. For his service project, he led a team of scouts and adult leaders that removed two old, broken fences near the library’s outdoor courtyard, and replaced them with strong, decorative wooden ones. The team also installed a stepping-stone rock garden on the courtyard’s hillside, making it safer for the library gardeners to work.

“I chose this project because I knew it would leave a lasting effect on the community,” says Ernest. “I also knew the library was a gathering place, and many people would enjoy the results of the project.”

Ernest learned a lot from coordinating the multiple organizations and people involved in the project. “This required me to communicate among many groups of influential people with different concerns.” he says. “I learned you have to think something out before telling others what to do; without proper planning, you may be set back farther than when you started. I also learned when you have fully completed a project, it feels really good. It’s great to know you had a major role in changing and improving the community.”

“Bird Park has always been a great place for people to walk with their families or pets, but in recent years, some of the trails have fallen into disrepair,” Trozenski says.

He began by mapping out the trails in need of renovation. A portion of the main trail ran into a small stream, creating a potential hazard, as there was no easy way to navigate the water or the rocks in the stream. With help from the Mt. Lebanon Nature Conservancy’s Ron Block, Trozenski designed a bridge spanning 14 feet. Over four days, friends and family worked with him to renovate almost 500 feet of trail, build the scenic foot bridge and provide safer passage for people.
“Completing my Eagle Scout project has been a most rewarding experience, and I’m thankful for the chance to give back to the community,” he says.
The Eagle projects are high profile but are just one facet of what scouts do, says Richard Heyse, an assistant scoutmaster for Troop 284 and a commissioner for the Eagle Valley District.  They also do things such as food drives to support local food pantries, put flags up at cemeteries for Veteran’s Day and do caroling at nursing homes.

Heyse’s son Preston recently completed a prayer labyrinth at Southminster house, where scouts and Southminster youth group members sorted and cleaned about 2,000 bricks that were discarded when Castle Shannon Boulevard was resurfaced with asphalt. Half the bricks were used to build a prayer labyrinth, something the ministers had wanted for some time, and the other half were sold to help finance the costs of other materials and equipment rental to build the labyrinth. In total, the project cost about $1,100 and took 200 volunteer hours.

“Scouts and their supporters perform several thousand hours of community service every year in Mt. Lebanon,” Heyse says. “I’m not sure if any single volunteer group is on the same scale as scouting in Mt. Lebanon when it comes to youth volunteering.

The Gold Award, the highest honor a Girl Scout can earn, recognizes scouts who demonstrate extraordinary leadership through projects that have sustainable impact in their communities and beyond. The Silver Award is also a prestigious achievement.
Hazel Drive resident Bonnie Dougherty, a scout leader for her daughter, Josie’s, troop, witnessed firsthand the positive effects scouting can have on a young woman’s academic and professional career. She earned her Silver Award growing up in Queens, New York, and remembers being asked about her project during the interview process for her alma mater, Boston College. 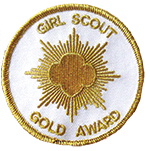 “Listing a Silver or Gold Award, or having achieved the rank of Eagle in Boy Scouts, sets you apart,” Dougherty says. It makes people wonder what made you stick with it, when many others decided not to continue.”

Like Ernest, Lindsey Barnhart, Girl Scout Troop 51452, also did a project that benefitted the library’s courtyard. A Mt. Lebanon High School senior, Barnhart found the after-school environment at the library to be hectic and crowded.

As part of the project, she researched colors and their psychological effects, and found that harsh red, orange, yellow and bright pink lights have a longer wavelengths, which is harder on the eyes and tends to make things seem closer, while blues, purples and lighter pinks have smaller, quicker wavelengths that make things seem farther away.

So, she chose to “calm” the library garden with softer colors. With help from friends and family and donations from True Value Hardware and Garden Dreams Urban Farm and Nursery, she added a wide variety of “stress-free” plants. To provide easier access, she also made a rock path from the patio up to the garden level and used several rock slabs to create an earthen bench. A final touch was adding a “peace pole,” symbolizing the worldwide Peace Pole project, which promotes serenity and world peace and is intended to encourage people to spread that message long after she completed her project.

Lisa Brown, Mapleton Drive,  a leader of Mt. Lebanon Troop 50740, recommends girls start early if they want to earn the Gold Award. “Finish your prerequisites in ninth grade,” she says. “Get your project approved and work on it during 10th grade. Eleventh grade gets very busy with all pre-college courses and looking at schools and learning to drive. You want to be done by the time you apply for college so you can include it on your applications.”

Faith Wintermantel, Troop 50740, began her Gold project in March 2015 and it took her a full year to complete. 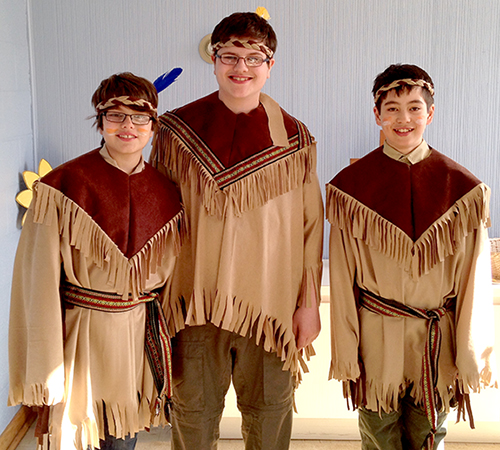 She created appropriate costumes for Cub Scout Pack 28’s Arrow of Light ceremony, an American Indian-type ritual that honors second-year Cub Scouts who are becoming Boy Scouts. Wintermantel had noticed when her brothers received their awards that their costumes represented the Native American aspects of the award inappropriately.

Wintermantel knew how to sew, a useful skill many people her age have not mastered. She gathered volunteers from the high school to participate in workshops, where she taught the skills needed to craft the costumes. Her team worked together to create the authentic costumes now used for Pack 28’s Arrow of Light Ceremony.

This year marks the 100th anniversary of the Girl Scout Gold Award, which has been known by various names over the decades. A series of events is planned to reconnect former award winners, culminating in a ceremony in November in which all who received the highest award in Girl Scouting will be pinned with the Girl Scout Alliance Award.