Jessica Rogowicz has long blonde hair, a bright smile and the kind of skin you expect to see wearing a golden tan on the beach. In fact, that’s what she did for much of her life, from enjoying the real sun to spending two to three sessions a week in a tanning bed, looking for the base color that would keep her from burning on vacation. She didn’t smoke or engage in other risky behaviors. “This is just my thing I do that isn’t the best for me,” she recalls thinking.

Even when she was diagnosed with melanoma three days before she turned 25, she figured removing two moles meant the story was over and she was fine. “I thought red hair, super pale is what skin cancer is,” she says. But then she Googled melanoma to learn it’s the deadliest of skin cancers. She felt like the only 20-something person in the world with skin cancer. But her lymph nodes were clear and she was fine. For a while.

In 2011, melanoma returned. Thankfully, it hadn’t yet spread and after surgery, she was again clear. Rogowicz, of Peters, and her friend, Lauren Simko of Bethel Park, subsequently co-founded the Pittsburgh Melanoma Foundation, the beneficiary of this year’s Serve2Cure tennis tournament, Saturday, September 15, at the Mt. Lebanon Tennis Center on Cedar Boulevard.

Tennis players are in the sun so often that it seemed a natural match. Melanoma will kill more than 9,300 people in the United States this year, and since it began in Mt. Lebanon seven years ago Serve2Cure has raised more than $100,000 for cancer-related charities. 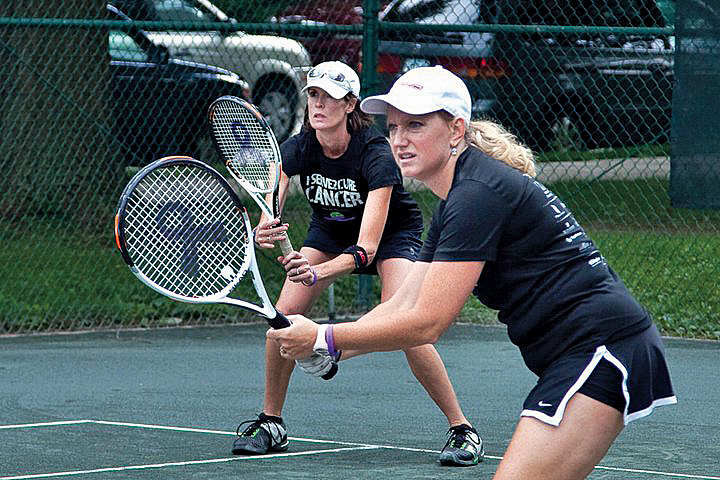 The Pittsburgh Melanoma Foundation, also founded seven years ago, has raised more than $135,000 for research and awareness of the disease, with funds going to Allegheny Health Network. Its primary fundraiser is a 5K held in South Park on Fathers Day weekend.

At a table at Orbis Caffe in Mt. Lebanon, Rogowicz and two organizers of this year’s Serve2Cure tourney tossed out names of others who have been diagnosed with melanoma, some of whom survived and others who have died.

Bethany Casagranda-Sedei, Standish Boulevard, a tennis player who connected Serve2Cure with Rogowicz, never got to meet her husband’s father, Dennis Sedei, who died of melanoma seven years ago at age 53. Serve2Cure chairman Robin Scibek’s grandfather, Jack Mesing, died of melanoma. They speak of another friend whose brother is fighting now. For easily 10 minutes they are able to name others.

This year’s tournament will be an all-day affair, starting with registration at 7:30 a.m., doubles and triples tennis matches all day and an awards ceremony and cookout following play. A health expo runs throughout the day, where attendees can talk to dermatologists, learn about safe sun practices and browse tables and exhibits. The public can also play games, take a beginning tennis lesson, participate in contests and buy food. The day wraps up at 9 p.m.

Admission to the rain or shine event is free but since it is a fundraiser, attendees will have many opportunities to donate, from a 50/50 raffle to buying a spot on the melanoma recognition wall. Entry in the tournament, which is open to the public for players rated 3.0 to 4.0 through the United States Tennis Association, is $75 a person. Registration online at www.serve2cure.org, whether you have a team or not. Organizers will match players to large teams of 20.

Rogowicz, a teacher in South Fayette, says working with her foundation “Has helped me to juggle that ‘What if I die young?’ thing that comes along with cancer.” She still sports a vibrant, golden glow. From a spray gun.