Next to the Starbucks on Liberty Avenue, in Bloomfield, sits an inconspicuous door. I open it. My feet pass several stacks of fliers on their way up the stairs and I open a second, equally-as-plain door and step inside the Pittsburgh Dance Center’s lobby. Long, red, silky fabric, anchored to the ceiling, drapes elegantly on the mat below. I know for a fact that my attempts at aerial silks this evening will be significantly less graceful than the polyester lycra I’ll be climbing on. I also know I’d never imagined I’d be jealous of the fluid form of a piece of fabric, but here I am.

Pittsburgh Dance Center opened at the end of 2011 and offers an array of class types. Some come for the ballroom dancing, others for the belly dancing, yet others for the amputee dance program, which owner Holly Kirby started in 2012. I’m here, along with two friends and five other strangers, for beginner aerial silks. Ally Slayden, a small redheaded woman with formidable shoulder muscles, is our instructor. She’s been a teacher since May. As each of us warms up by climbing our respective silken ropes to the ceiling, she cycles among us, making sure our technique is on point and congratulating us when we’ve done well. I slide down feeling accomplished, careful to avoid silk-burn, but my ego quickly depreciates when Slayden suggests I try climbing with my non-dominant foot too.

For the next 60 minutes my friends and I take turns twisting into the silks and striking poses. Some “tricks” look infinitely more difficult than the reality, while others appear ten times easier. I effortlessly roll my body into a Peppermint Twist–gravity is helping me–and put my arms out Titanic-style while my friend snaps a picture. Taking pictures of each other in different poses is half the fun, for beginners. Just a few minutes later I can feel how much of a beginner I really am, though; I’m attempting to cross the two pieces of silk behind my back while I stand suspended mid-air, a move I just watched a girl who looks about five years my junior complete in a matter of seconds, but the silk and my arms aren’t cooperating. I struggle for a while with both laughter and the inability to continue. I can see how shoulder muscles, of which I have little, might be helpful in this situation. My head, previously wedged between the two pieces of silk in an effort to wedge them farther apart, pops back out on my way back to the ground. I wasn’t able to complete that “beginner trick.” 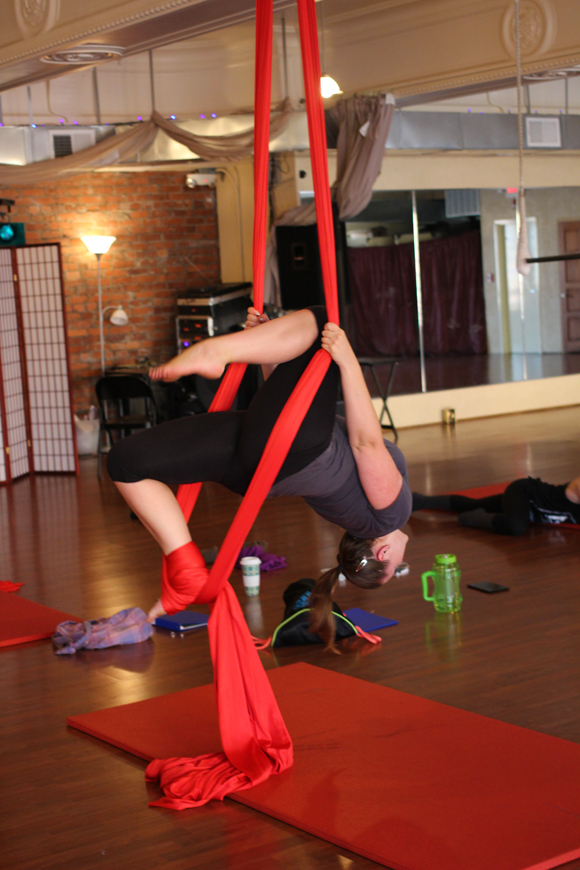 But that’s not expected of me, either, during my second class. “I like seeing people’s progress,” our instructor Slayden told me when I asked her about the best part of being an aerial silks instructor. In my mind, I’m plotting everything I’d do differently next time to try to finish the trick. Slayden’s right: aerial silks are an addictive sport and her comparison of it to “adult playing” is spot on. Towards the end of class, I jump into what’s called a hammock, the two pieces of fabric tied together at the bottom, and awkwardly contort my hips until I’m hanging upside-down in the loop to stretch my muscles. I stay there for ten minutes because it’s fun.

My arms, tingling from so much exertion, hang like limp noodles. I know tomorrow they’ll be sore and the day after tomorrow, they’ll scream. But what I’m hoping is the next time I go to aerial silks class, they’ll also be just a little bit stronger.