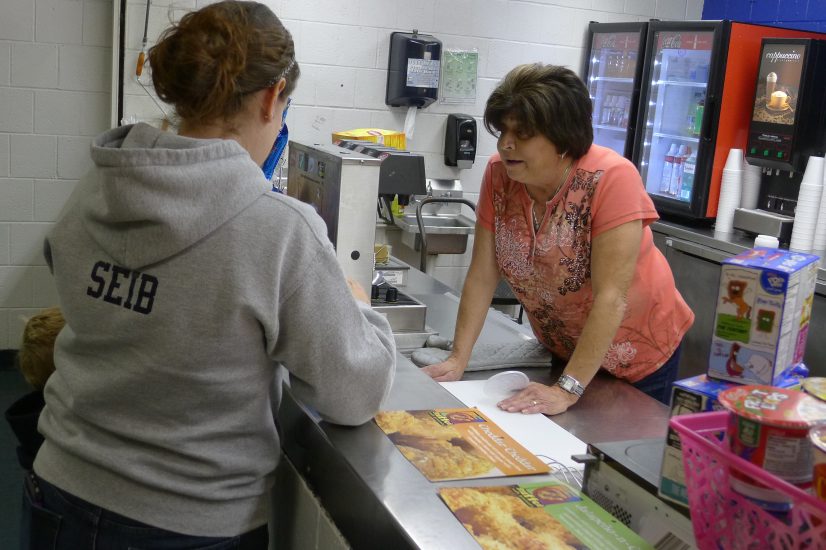 It wasn’t an unusual question to hear at the Mt. Lebanon Ice Center, given all the sweaty hockey players of all ages there, but this time it was asked in a positive context.

Something actually smelled good, like Sunday supper cooking on the stove. Some kind of meat, maybe beef …?

Turns out, these hockey parents were right: It was seasoned ground beef that Rose Kaiser was cooking for the walking tacos she sells in the concession stand.

After four years away, Rose (as lots of hockey people know her) is back running the rink’s snack bar. With warm Hi’s and hugs, she started Oct. 1.

She’d stopped running the rink and pool concessions in 2012 because she was so busy with her regional vending machine-stocking business. But having downsized that, she rebid and won the contract to run the two Recreation Center snack bars. She’s getting noticed by new customers as well as former regulars because she’s expanding the food options.

Cooking her own meat for the walking tacos comes naturally for the Jefferson Hills woman who used to run Taco Tina’s in the Century III Mall. She’s added peanut butter-and-jelly sandwiches and grilled cheese sandwiches, and at a customer’s suggestion, started offering one with egg on it. She’s also added egg sandwiches and French toast, as well as cereal, fresh fruit and Pop Tarts for the early morning crowd, and is open to everyone’s suggestions.

“I have a philosophy: ‘No’ is not in our vocabulary,” she says as she opens for another evening.

“Whatever you want, I’ll  make it for you,” she tells a man who orders coffee and two orders of chicken nuggets for his children. To the woman who orders a hot chocolate: “You gotta have whipped cream. I took all the calories out of it.”

While she has hired two Mt. Lebanon women to help her cover the long weekend days, Rose says she’s going to be working at the stand much more than she did four years ago, which she says will make it easier for her to know what customers want.

For instance, she now accepts credit cards. She plans to try homemade soup when the weather turns colder, and is open to trying anything that can be made with her limited equipment and staff.

“I tried chicken salad but it didn’t go over well.”

She’s been writing what’s available in chalk on a sandwich board set up in front of her counter. But the best advertising may be the olfactory kind. She recently fired up some bacon one Sunday morning and “people started coming over.”