Regular customers already know that news that Savvy Spices on Banksville Road is closing, and they have been reacting.

“Shock, despair, sadness,” said Dave Johnson, who has run the store for 15 months with his wife, Deb.

That’s what the Mt. Lebanon couple have been hearing since they announced on Jan. 25 that Saturday, Feb. 1, will be their last day, if their remaining inventory lasts that long.

They’re selling off everything at 60 percent off. Yesterday, Mr. Johnson was very busy with people buying up what they could and telling him how sorry they are that the store is closing.

But in the end, “Just not enough business” is why they had to, he said.

They’re not sure what’s next, but they’ll “have to return to the real world,” he said, and get jobs working for someone else. She’s a high school teacher and wants to go back to that. They know they may have to relocate.

I told Mr. Johnson that I am one of the customers who is sad to no longer have this great local source for quality herbs and spices. I couldn’t resist stocking up on a few things, including three types of paprika. 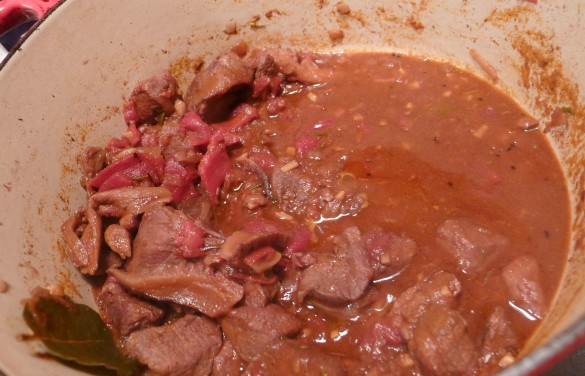 I’ll use that for one of my favorite recipes from this winter, which someone sent to me via Twitter. It comes from outdoorsy cook Hank Shaw, and it’s so warming good in this cold weather. It’s also one I wanted to share with the Johnsons, knowing they will appreciate the paprika-ness of it.

Mr. Shaw makes this traditional Spanish stew with game, but you can make it with any kind of meat, from lamb and beef to chicken, or mix.

“There is no reason you cannot toss in whatever you like,” he writes. “I suppose you could even make a vegetarian version with mushrooms. When switching from light to dark meat, switch from white to red wine, too.”

Do not leave out the dried mushrooms, which I think really add a nice touch of flavor and texture. You can halve the recipe, if the amount of meat sounds like too much, but trust me, you’ll want leftovers, though you might find there aren’t any.

“Serve with mashed potatoes, rice, polenta or bread,” advises Mr. Shaw. “Simple sauteed greens are a good accompaniment. A big red wine is also a must, ideally something Spanish, like a Rioja.”

If using, put the mushrooms in a container just large enough to hold them and pour hot water over them. Cover and set aside.

Salt the meat and set aside for 10 to 20 minutes at room temperature. Use this time to chop the veggies.

Pat the meat dry and pour the olive oil in a large Dutch oven or other heavy pot that has a lid. Heat the pot over medium-high heat. Brown the meat on all sides in batches. Do not overcrowd the pot. Set the meat aside in a bowl when browned. Take your time and do this right. Add more oil if needed.

When the meat is browned, add the onions and stir to bring up some of the browned bits on the bottom of the pan. Sprinkle the onions with a little salt. Cook until they begin to brown, then add the garlic, the cured meat and the mushrooms, if using. Cook until fragrant, then add the meat back to the pot and mix well.

Pour in the wine and turn the heat up to high. Stir and boil furiously until the wine is half gone. Turn the heat back down to medium and add the tomatoes, the roasted red peppers and all the spices and herbs (except the parsley). Stir well. The level of liquid should be about 2/3 the way up the sides of the meat. If it is low, add the stock. I typically need about 2 cups.

Cover and cook at a bare simmer — just barely bubbling — until done. How long is that? Depends on the meat. Rarely is any meat done within an hour, but I’d check a store-bought chicken then. I find pheasants and rabbits take about 90 minutes, boar, pork and hares about 2 hours, and venison and beef up to three hours or more. Use your judgment.

Right before serving, test for salt and add some if needed. Add black pepper and the parsley and stir well.

We have more on Savvy Spices. Read: Spring Spices and More Spices