Ice cream. A single spoonful coats the mouth in creaminess, zings the palate with flavor and gives a cool, refreshing feel. The product pairs perfectly with almost any other sweet dessert from cakes to meringues; there’s something very pleasing about a piece of warm fruit tart graced with a melting dollop of ice cream. Even plain fresh fruit takes on an elegant dimension when eaten with ice cream.

Recognizing that meshing of desserts is Mike Collins, owner since 2000 of Scoops at 311 Beverly Road, one of three Mt. Lebanon ice cream shops. Collins, Baywood Avenue, fashions his own ice cream cakes. “The cake is brought in, but I make the final product. I’m a cake decorator by trade,” he says. For the cake, Collins chooses one of dozens of ice cream flavors he rotates in his store, all purchased from carefully selected vendors. Mint chocolate chip is the favorite, gobbled up by the Lincoln School children who make Scoops a regular stop, he says.

Ryan Miller, of Sleepy Hollow Road, owner of Betsy’s at 664 Washington Road, creates ice cream from scratch. “We developed every recipe from the ground up,” says Miller, who opened his shop in 2012. “We now have over 125 different flavors which we rotate.”  Sometimes Miller gets requests for gourmet flavors from chefs—goat cheese and basil, a traditional savory combination but unusual for a sweet, for example. Try it with fresh or sweetened figs.

Many popular flavors today are relatively new in the ages-long, worldwide history of chilled and frozen desserts; ice cream recipes first appeared in Western cookbooks in the eighteenth century. All start with a few basic ingredients: cream and/or milk, sugar, flavorings and, traditionally, egg yolks to get that marvelous mouth feel. (Today, stabilizers, largely plant based, are often used instead.) It’s what is added next—nuts, chips, cookies, fruit—that creates a distinctive flavor.

But the ingredients are the easy part. The goal is to produce a thick, smooth frozen product without ice crystals. In the old days, that required a deft combination of salt and ice surrounding a container in which the ingredients were churned. While that may conjure up delightful images of warm summer evenings when friends and family took turns rotating a handle that turned the paddles that beat the cream, the reality is that making ice cream used to be a tedious process. Happily, the situation has changed; more about that later.

Yogurt is another option in the frozen dairy dessert genre. Opened in 2015, Piccadilly, 695 Washington Road, rotates a basic line of 14 frozen-on-site flavors. “I’m all about natural and eating healthy,” says owner Lyllian Rose, who aims for 100 percent organic products. There are no sugar-free yogurts. “We are going for real,” she says. “If it was sugar-free we would have to put something fake in it.”  The large space serves as an after-school wind down area, complete with games, plus a party/meeting space. 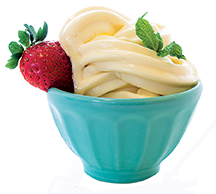 All the stores have a large variety of toppings. Roasted strawberries at Piccadilly is one of the more unusual options. Many adults prefer their ice cream unadorned unless it’s incorporated into a plated dessert, but “kids love the toppings—flavored syrups, M & Ms, jimmies, chocolate chips, tiny marshmallows, candy bar crunch, fruits, you name it,” Collins says.

With olden days long gone, perhaps you’d like to try making ice cream yourself, not as hard as hand-turning that old churn but more work than placing a counter order. I began doing it years ago with equipment that was just an electric version of an old-fashioned machine; all that ice and salt was a real bother and produced erratic results. I progressed to containers that had to be kept in my freezer before use, then placed in electric churners; they really didn’t freeze efficiently. Finally, I graduated to a heavy refrigerated unit that gives excellent results.

With all the carefully prepared commercial options, plus the cost of an ice cream maker, why even think about making your own?  Well, watching a liquid grow in volume into a mass of frozen clouds is fun. You can closely control for health and dietary requirements in the product, in the environment and on utensils. A higher fat content is possible in a homemade product, giving creamier results. But the best reason of all is the endless flavor combinations, ones you love but wouldn’t likely encounter in a commercial establishment. Think hot pepper, buttered beer, rose, chocolate ginger or lavender honey, a classic Provençal combination. Even prosaic vanilla takes on brilliant dimensions with a Bourbon Madagascar or Tahitian bean instead of a commercial liquid. You can use just about anything ice cream complements to create a flavor, although there are exceptions. The worst I ever tasted—I can’t say ate, because I only managed a spoonful—was the mushroom ice cream that ended an otherwise superb meal in Berlin.

If you want to try making your own, check online for various ice cream makers in a range of prices. There is a recipe for honey ice cream at www.lebomag.com, complete with variations. Taste test a variety of local honeys—perhaps full-flavored fall or pure wildflower products—before deciding which will give you the most pleasurable results.

Buy your own frozen treat, or make it. Either way you’ll enjoy one of the simplest, and most satisfying, of all desserts.

HONEY ICE CREAM
Ingredients:
2 ¼ cups heavy cream
¾ cup whole milk or half and half
½ cup sugar
1 cup honey
2 large egg yolks or 3 small (Use the whites for meringue. Egg whites freeze very well.)
½ teaspoon vanilla extract
pinch salt
Variation 1:  Substitute ¼ to ½ teaspoon lavender extract, depending on how much you like lavender) for the vanilla extract.
Variation 2:  Add 1 tablespoon cinnamon to the dry ingredients and/or 1 cup graham crackers in small chunks (Add crackers toward the end of processing per your ice cream manufacturer’s directions.  Freezing the crackers prior to adding them to the ice cream reduces melting.)