And so I was sitting in the lobby of St. Clair Hospital, sending email from my iPad and talking on my iPhone, when I looked across the way and beheld the person depicted below. He was working on both a laptop computer and a tablet, while talking on a cell phone. 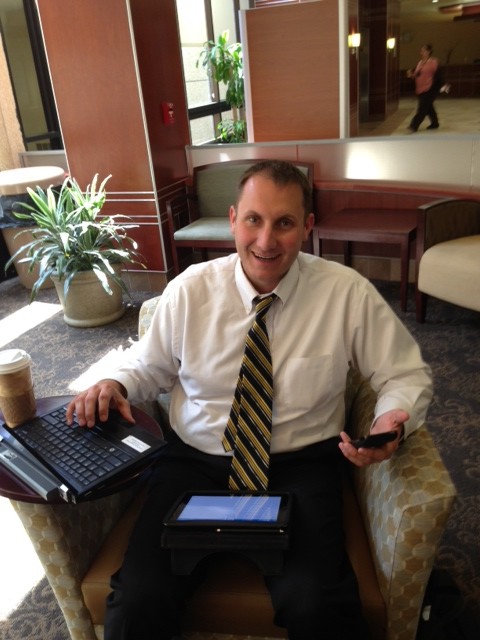 This picture is not interesting because it portrays something unusual. It is because scenes like this are becoming signs of our times. Say hello to Techno Man 2013.

I don’t know what the future holds for technology, but I am pretty sure that in a decade or two, we will look at photos like this and smile. It will seem as quaint to our older, wiser eyes as a leisure suit.

Techno Man didn’t even have his full arsenal on hand. He told me he actually has two tablets, his other is an iPad. I was impressed. But don’t think I was even slightly jealous — I wouldn’t use non-Apple electronics if they were free. But somehow, in some strange way, this experience summoned powerful memories.

It really took me back — back to 1955. In those days, Davy Crockett was King of the Wild Frontier. It seemed that every boy my age had a coon skin cap. But that wasn’t the end of it. There was an unlimited supply of Davy Crockett stuff that your parents could buy for you — if you could talk them into it. My friend Joe Hrach and I were serious Crockett paraphernalia collectors.

Then, he soon had a rubber Bowie Knife with a scabbard that hung from his belt. I found one, too — but not, in my opinion, nearly as good.

And soon after that, he acquired an impressive plastic long rifle. He slung it over one shoulder with the powder horn and pouch criss-crossed. I thought the long rifle was extremely cool, but my parents weren’t buying it. I was slowly but surely losing this arms race.

Unexpectedly, fate intervened. My grandparents, returning from vacation in Arizona, bought me a real buckskin jacket with real fringe!

Eat your heart out, Joe Hrach, wherever you are!