Where to start? My grandmother, Helen Peck Rabinowitz, had great taste, or at least, I like her taste. She lived from 1902 until 1967, just a few months after I was born, although she wasn’t expected to survive long after my parents were married, in 1963. She had cancer but who knows what kind. They didn’t have mammograms or Pap smears back then and Lord knows, even if they had, you would never talk about such things. In fact, my grandmother never even told my mother she had cancer. The doctor did. My grandmother didn’t believe she was ill so she just didn’t speak it.

Since I never knew her, the only way I really have to get to meet her is through pictures as well as some of her things that I have accumulated. Most things wouldn’t mean anything to anyone but my family, which is the way heirlooms should be. She didn’t have a lot of money, but when she bought things, she bought nice things, much of the time, with her own cash. She worked at B. Altmans in New Jersey, making my mom a latchkey kid before that term even was coined. She also like fancy things. The more scrolls on stuff, the better. Her china, silver and dishes are awash in roses and bows and goldleaf. Some of it is a little overfancy and the reason why my mother sold some of her things decades ago.

When my own mom died in 2009, my dad slowly began redoing the house the way he wanted it, which meant there often wasn’t room for his mother-in-law’s things. Every few weeks, I’ll get a call: “Hey, why don’t you come get…” and I do. The latest is a marble top coffee table that stood in my parents’ foyer for the majority of my life–which means my mom took it before her father died, in the 1970s. To have her things in my home makes me feel like that side of the family, who fled Russia just after the turn of the century to avoid being persecuted for their religion, never really died. 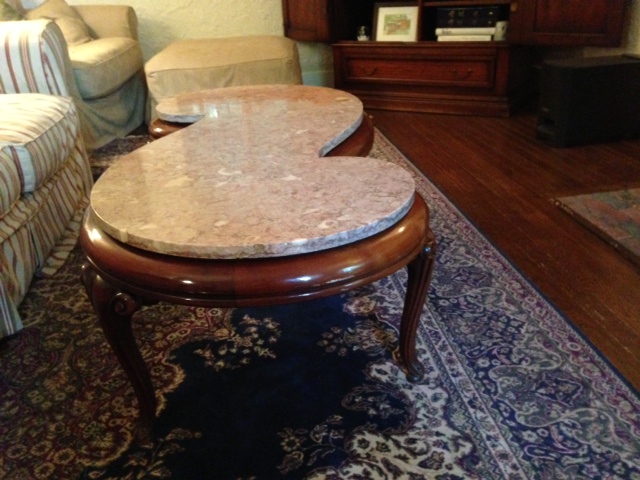 But now, I suddenly want to know all about this table. Perhaps someone reading this can be of help? On the underside of the marble top, which is removable, it scrawled in red ink: N.S. Goldfarb, 1488 Pitkin Avenue, Brooklyn. #6010. I did a Google Map search and indeed there is a furniture store there now, Lindo Home Furnishings. The gentleman who answered the phone was less than friendly and instead of getting me a manager or owner as I asked, wanted to know more who I was and what I wanted. I explained to him what I was looking for and all he could say was “We’ve been here awhile but not that long.” I asked him if he thought the building had housed another furniture store before Lindo’s and he thought so but didn’t know. “Looks like it’s time to trade up that table, right?” he said. Ugh. 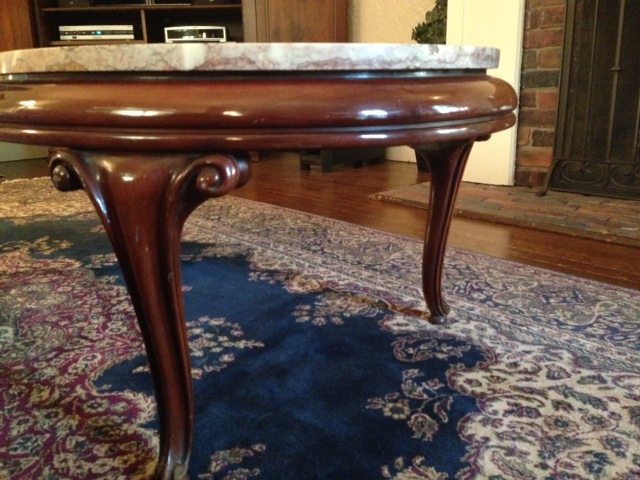 I did a property search as best I could through New York’s confusing public records cache. It looks like the building housing the store may have been built in the 1930s, which would mean the table, if she purchased it there, is not an antique, unless there was another shop there first before that building was constructed. I tried putting the table on Facebook and had a couple suggestions of some people to call. I guess I’m just worried I’ll bother some antique dealer only to learn it’s not worth anything.

It doesn’t really matter. I’m not selling it. If it were insanely valuable though, I might put it somewhere the dogs couldn’t jump on it or my 12-year-old wouldn’t coat it in spaghetti while watching the Steelers game. Let’s face it: after sitting quietly in a foyer for 43 years, it’s going to have a hard rest of its life. But I’m the end of the line for this side of the family anyway, an only child of an only child. As for passing it down to others, I’m not sure anyone is as interested in my grandmother’s stuff as I am.

If you have any info that could help, please drop me a note here at the magazine. Thank you!