For years, those of us who work in the Mt. Lebanon Municipal Building have been hearing rumors of a ghostly presence in the halls. A few members of our workforce had some stories to tell. Stories of encounters that border on the unexplainable, but could just as easily have a rational explanation.

So we decided this Halloween season, when the veil between this world and the next is at its thinnest, we would try to make contact with whatever may or may not be dwelling in the shadows and dark corners of 710 Washington Road. We came into this project with no expectations. We are, after all, journalists. We give light and let the people find their way.

We started by sending out an all-employees email advising of our project, asking for stories anyone may want to share, and inviting our co-workers in the building to join us. This was where we struck gold. It turns out Nick Schalles, our information technology director, is a huge fan of paranormal investigations, and he was willing to share his expertise and enthusiasm with us, which immediately upgraded the project from its original concept of stumbling Stooge-like around the building for a few hours, until we heard or saw something that would make us go “woo woo woo woo” and run around in circles, risking injury by smacking into a window. (Editor’s note: that still happened, but only once.)

Nick was very generous with his time and with some equipment that normally served some IT function for the municipality, but which could also have night gigs tracking down spirits: Things like electromagnetic field (EMF) detectors, used to troubleshoot electrical wiring, but also handy for measuring naturally occurring energy; infrared thermometers, to measure temperatures from a distance; he even scored us a thermal imaging camera on temporary loan from the fire department. Toss in some security cameras on all of floors of the building, handheld audio, flashlights, walkie talkies and we were set. 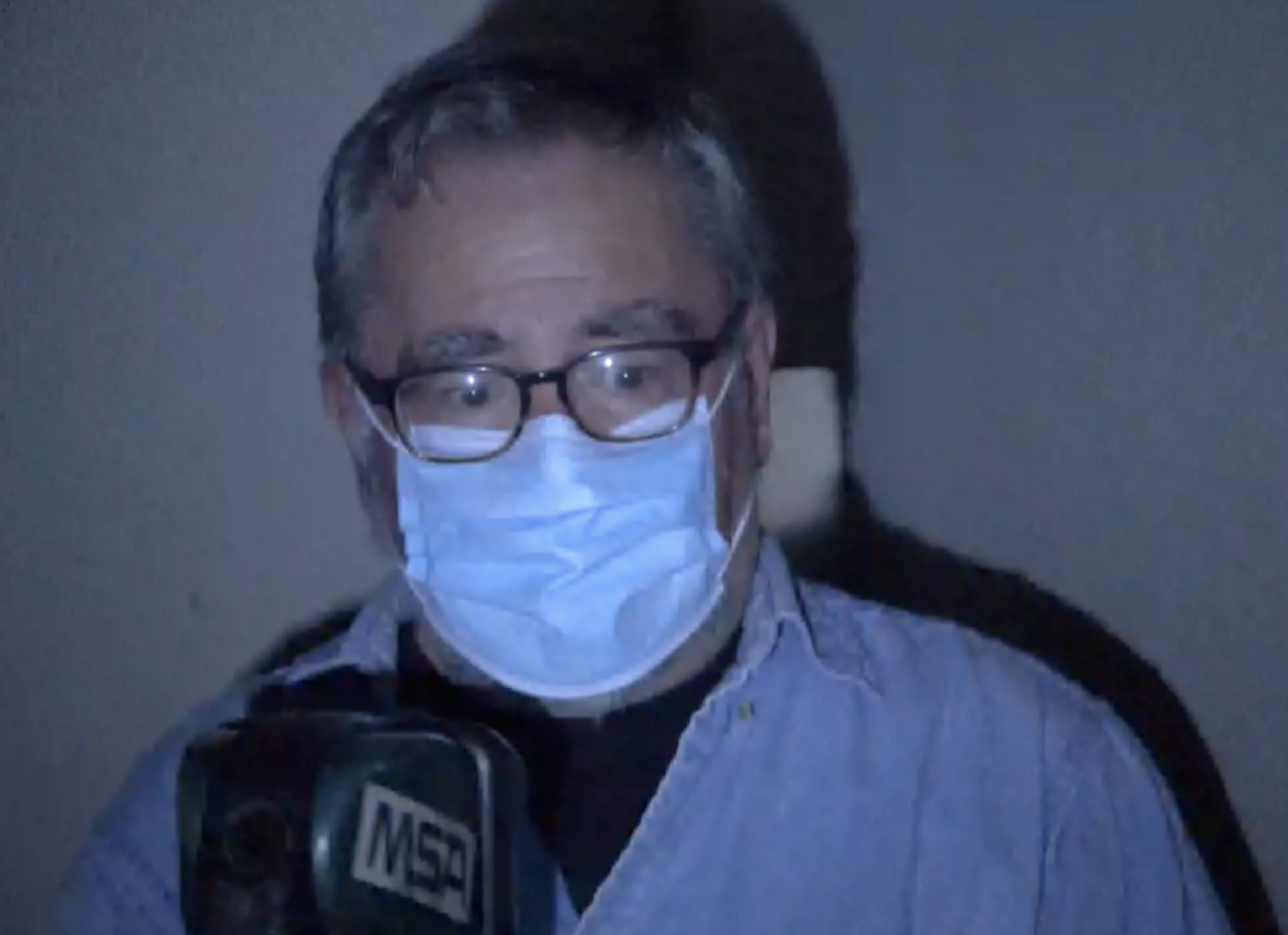 I think I saw a ghost. 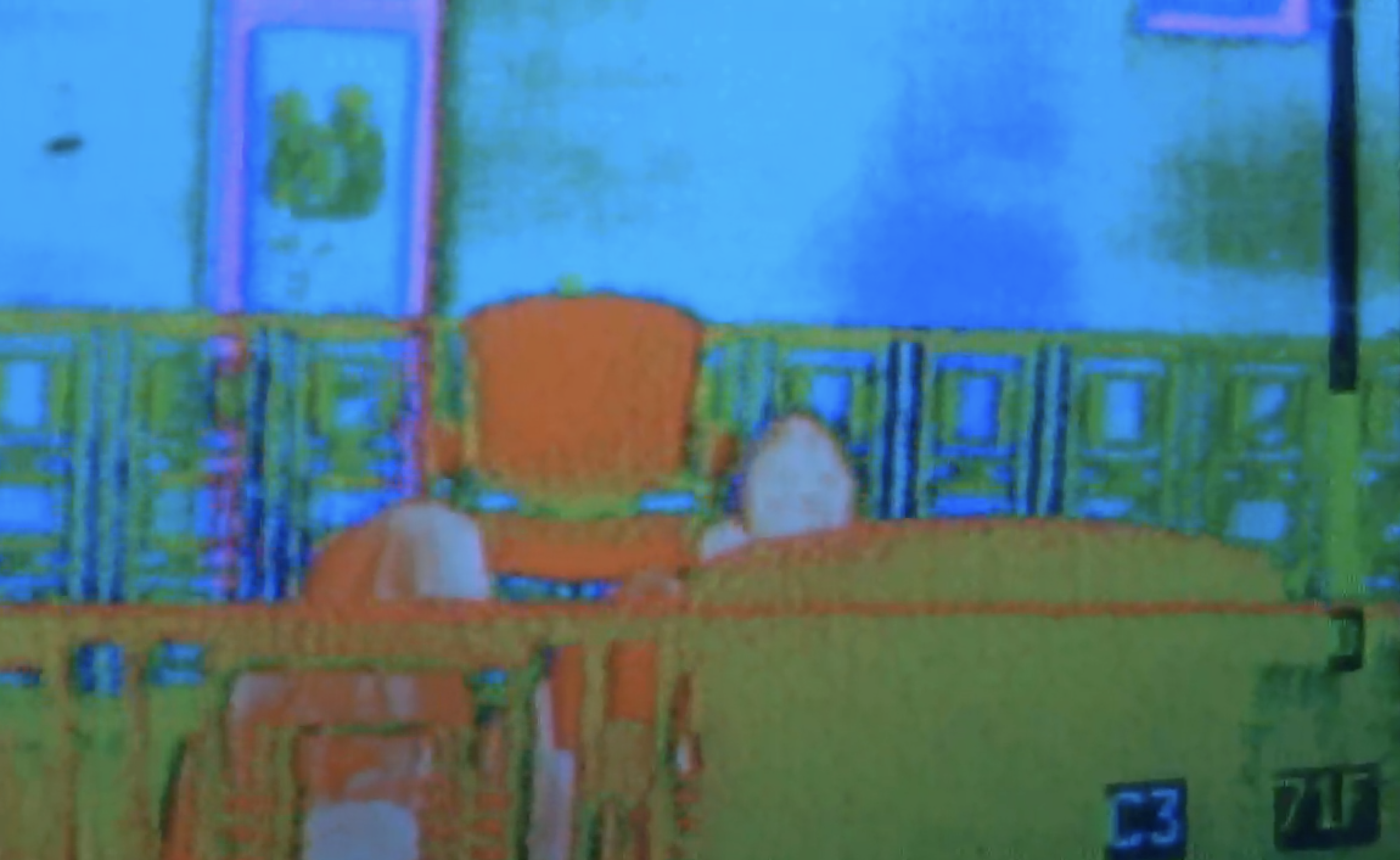 Team True Believers, as seen through the thermal imaging camera. 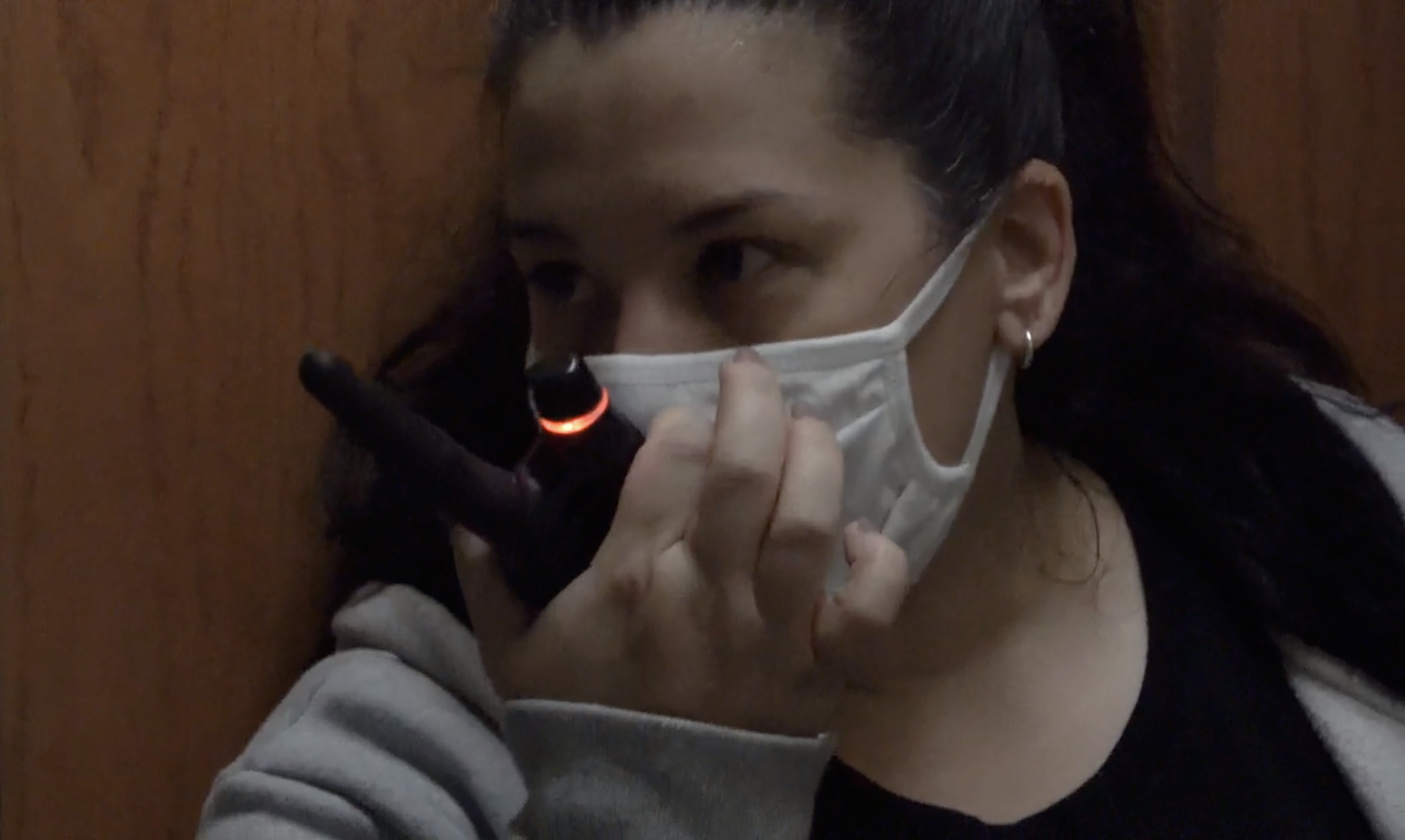 Amy, checking in with base camp. 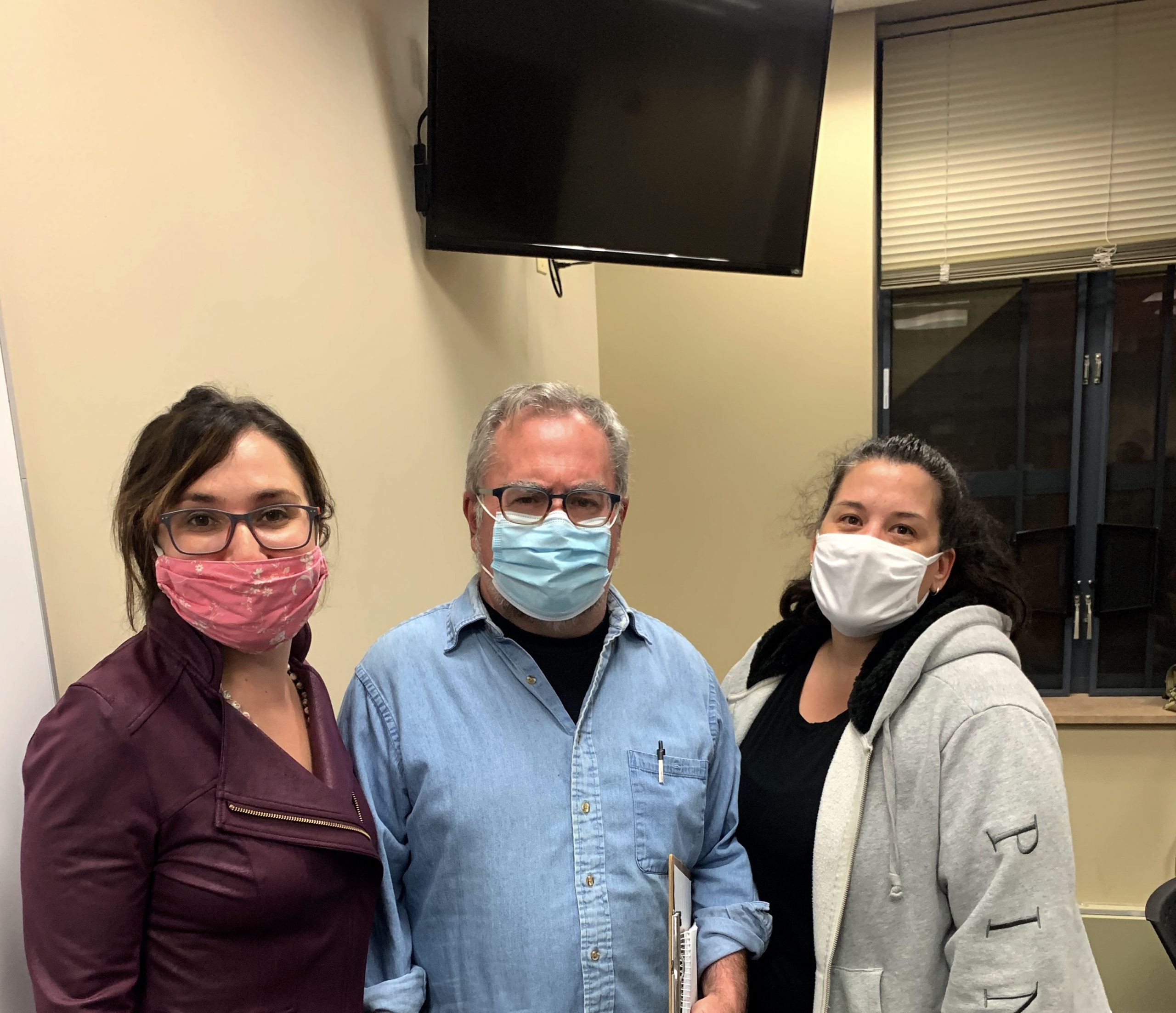 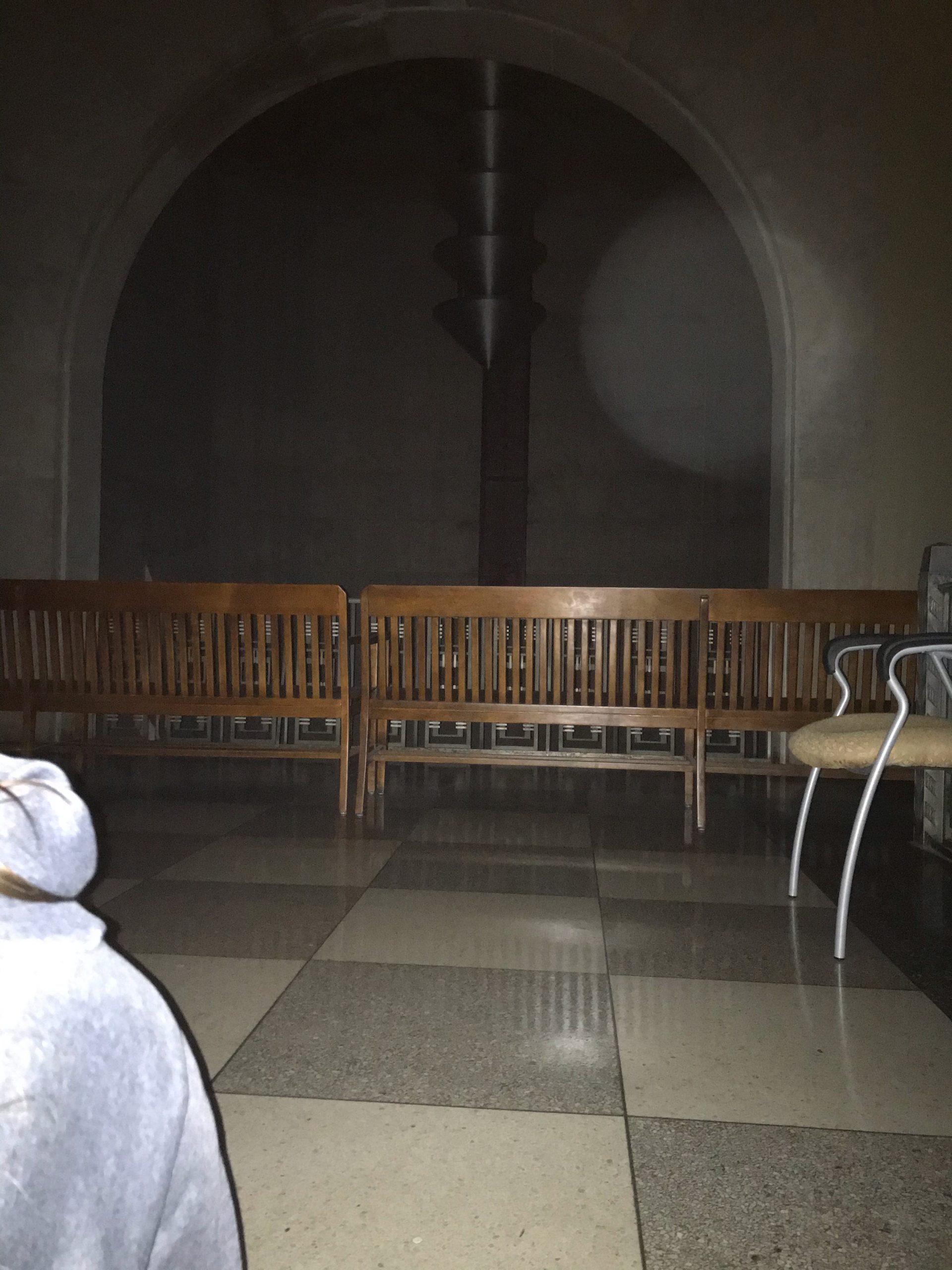 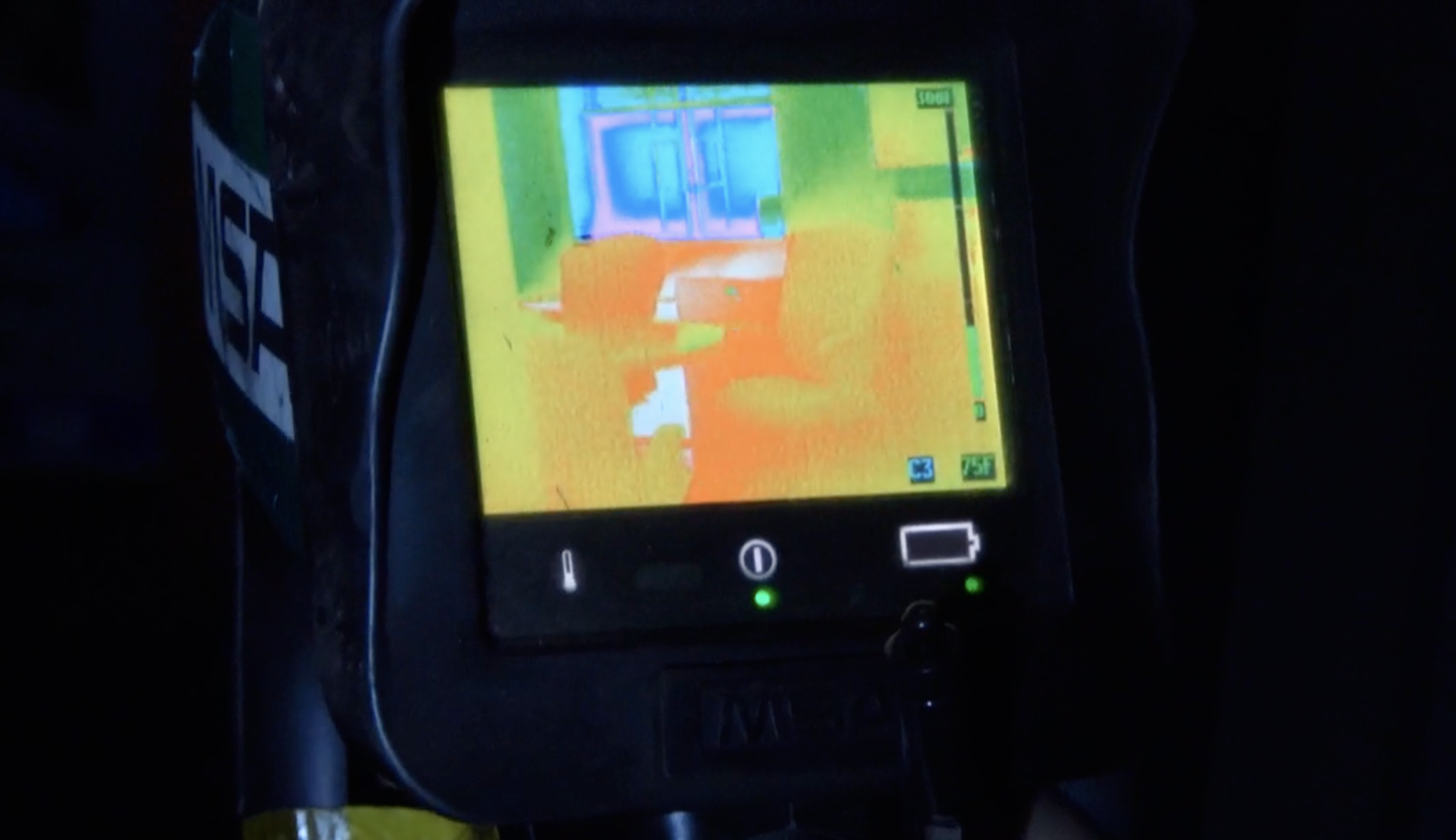 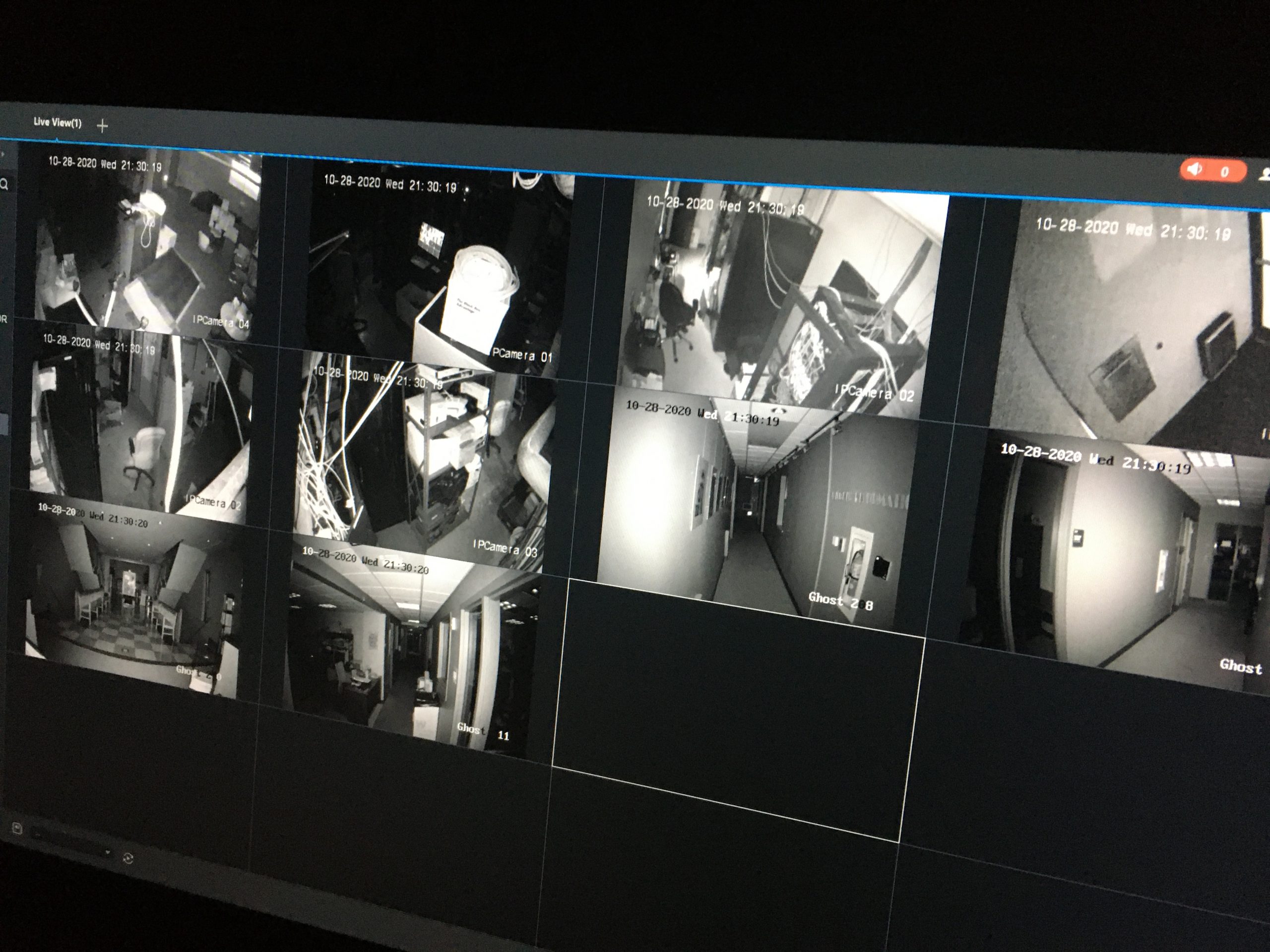 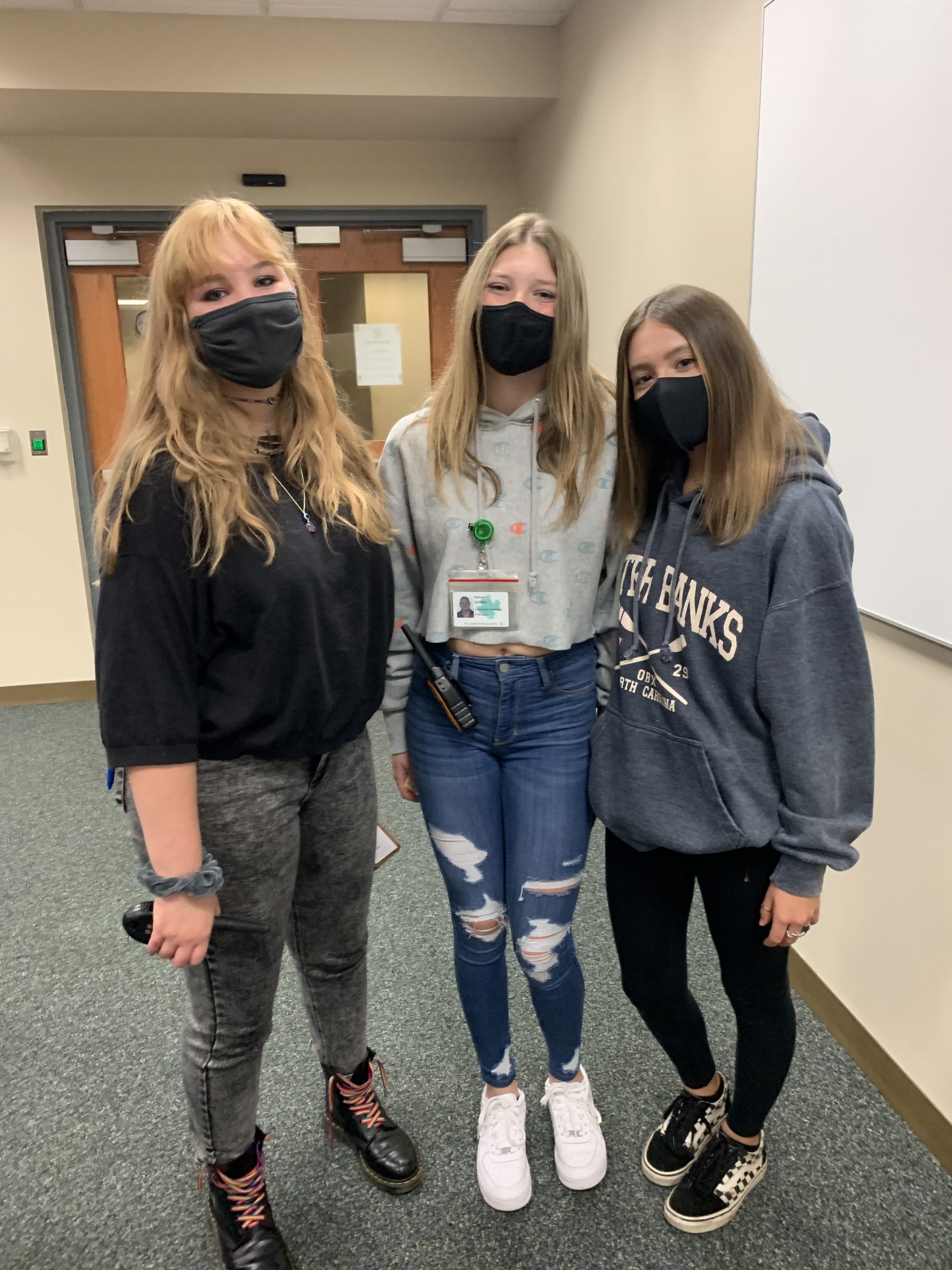 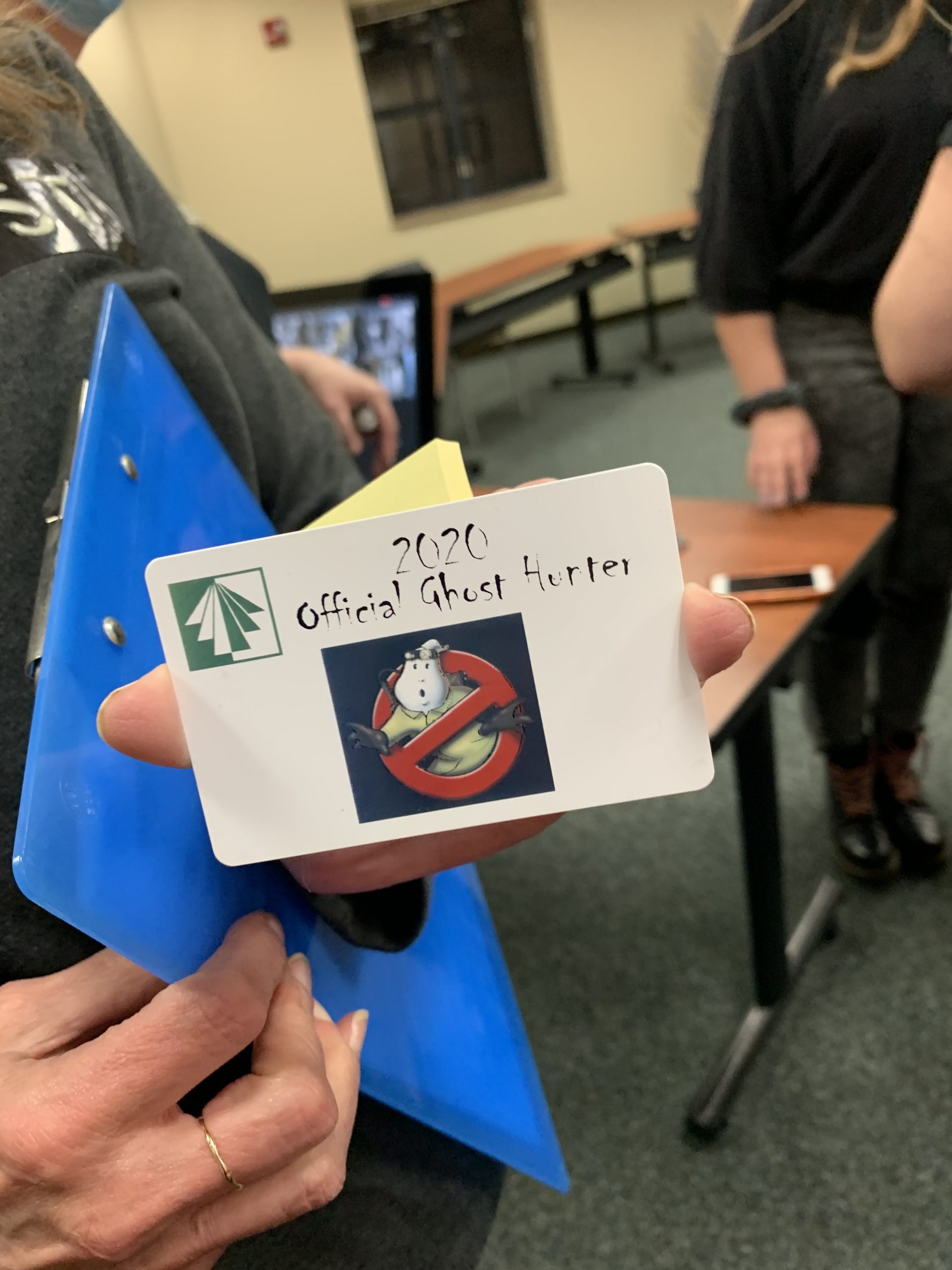 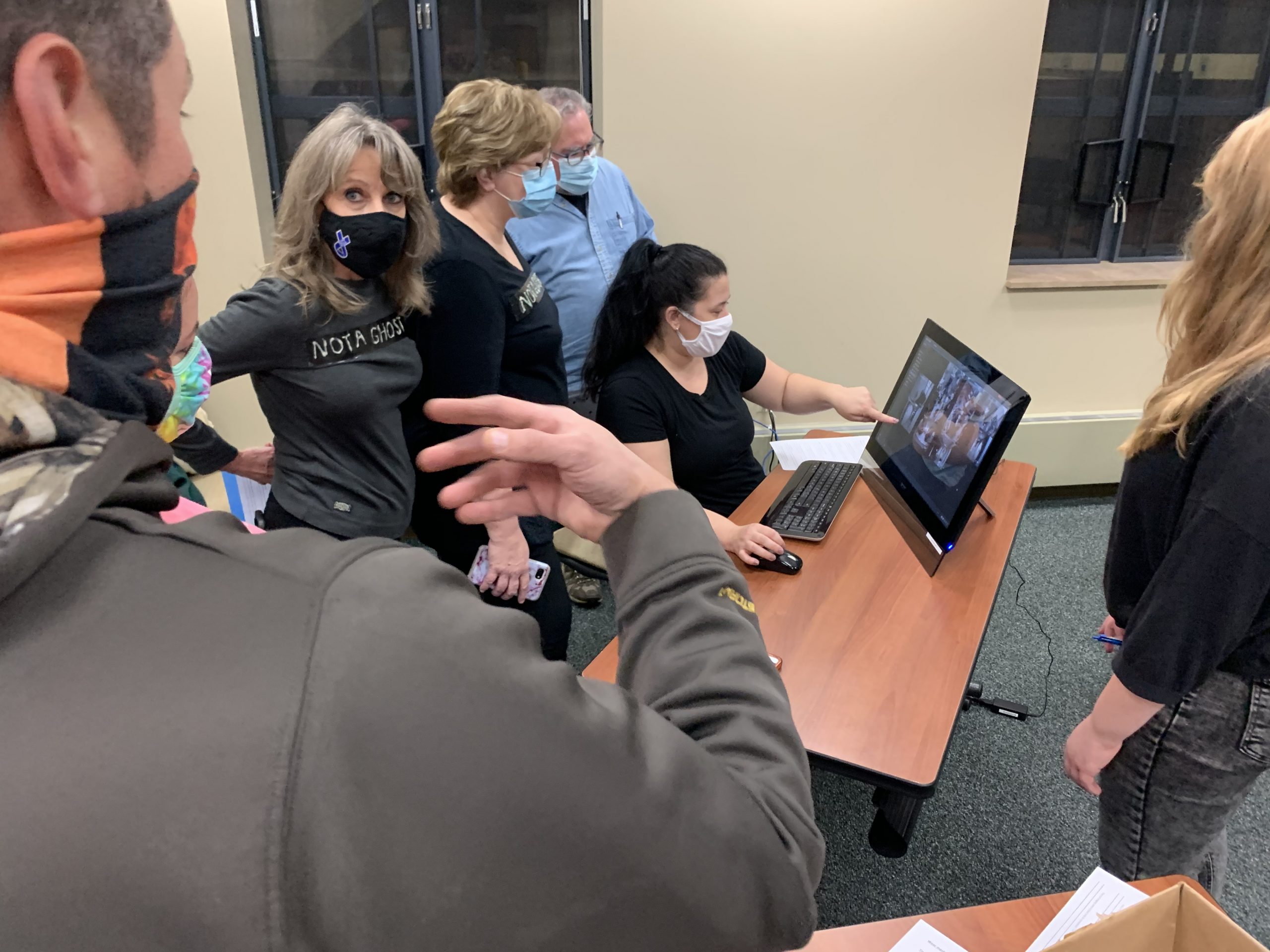 Meeting at base camp 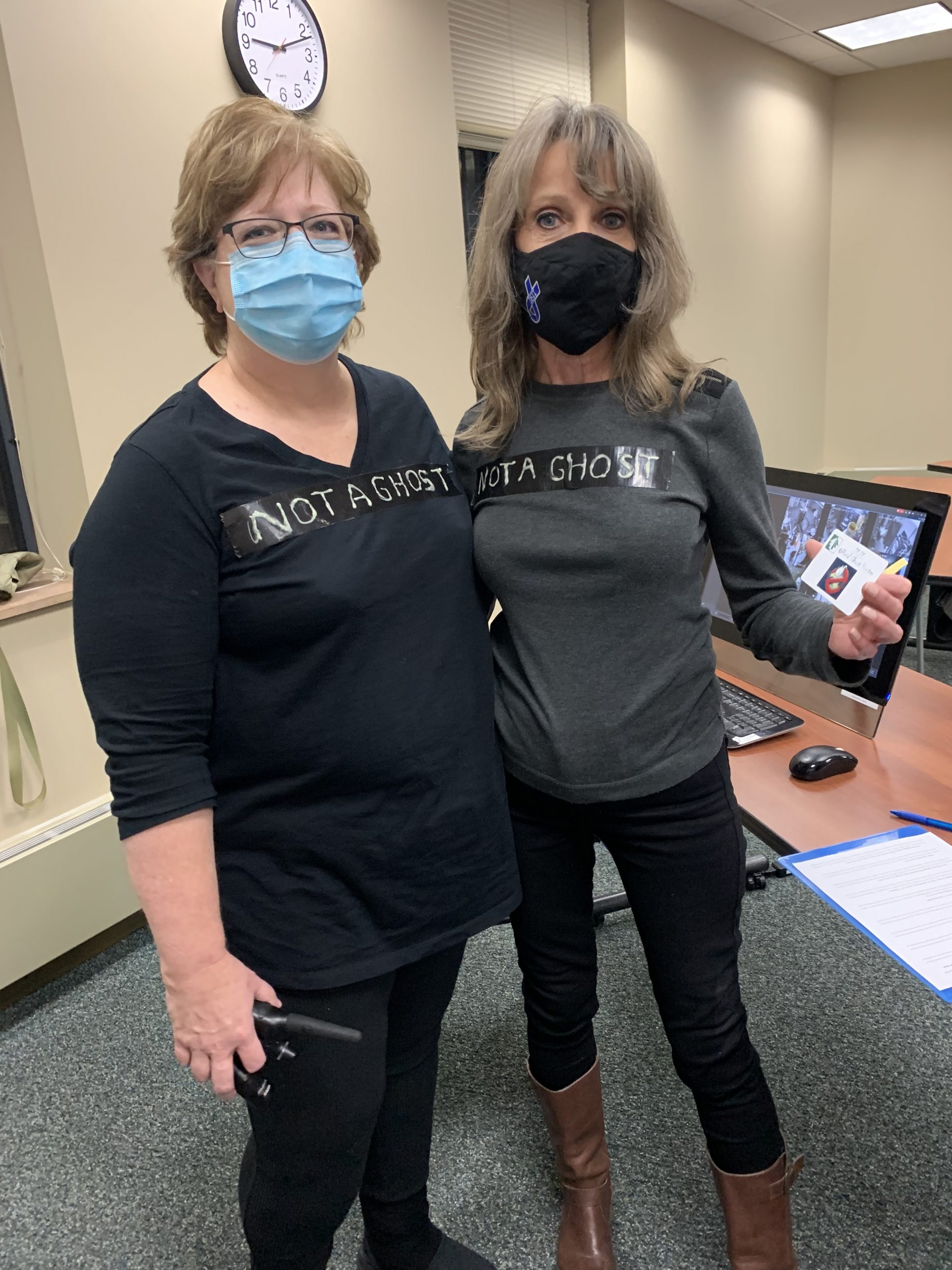 Team Not A Ghost 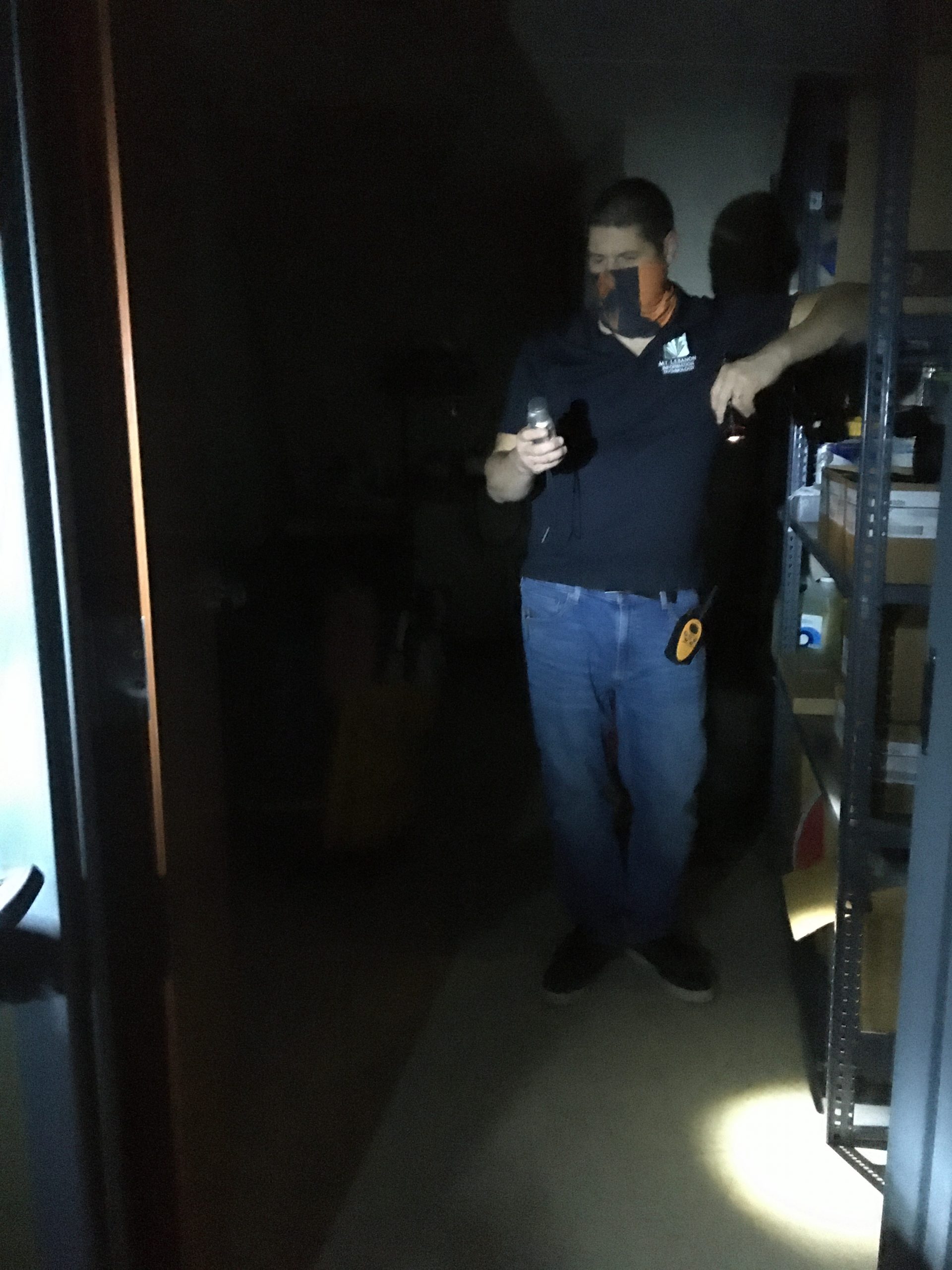 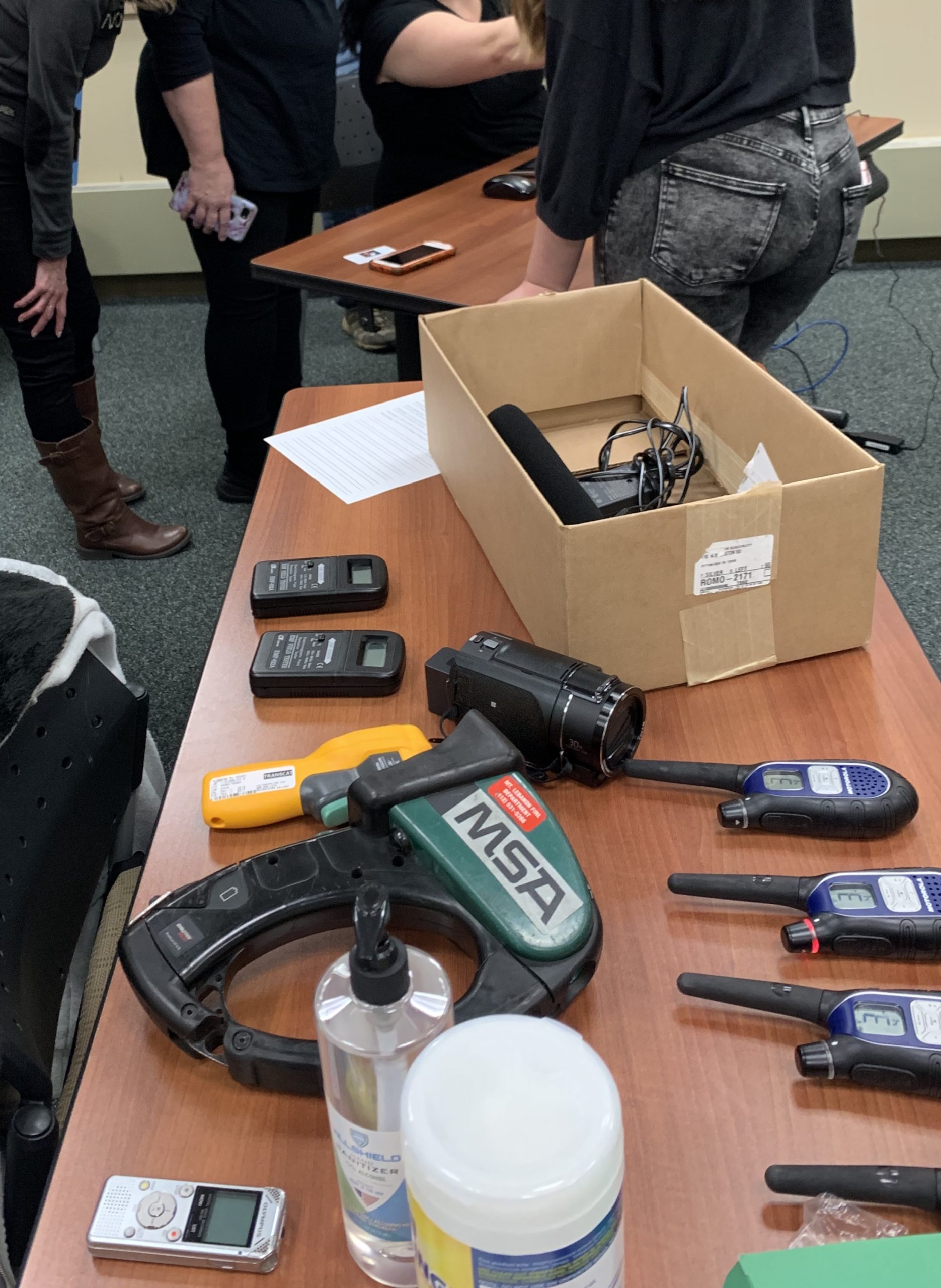 On the evening of Wednesday, October 28, at a little after 9, as we waited for the library board meeting to adjourn (intrepid adventurers into the other realm or not, we still have a town to run), we gathered our teams. We had Team PIO: me, Amy Martin and Katie Wagner. We brought the cold dispassionate eye of the truth seeker. Team Expert: Nick and his wife, Lori, who shepherded us through the night and lent the credibility of experience to the endeavor; Team True Believers: consisting of Nick’s equally ghost-friendly daughter, Rayna, her friend, Emily and Amy’s daughter, Chloe, who may or may not be a practicing witch. They brought the enthusiasm of youth, unclouded by cynicism. And finally, Team Not A Ghost: consisting of Deb Mooney from our tax office and Nancy Wenger from inspections, who brought … spirit. That’s what they brought.

The plan was to spend the next few hours doing several sweeps of the building, looking for anything out of the ordinary, advising the other teams of anomalous findings so they could verify and maybe further investigate. We split up, taking separate floors and journeys. Team PIO started by retracing the steps of one of the municipal building employees who shared her experience with us. From the basement, up through the ground floor, to the first-floor landing where she heard a door slam at the same time on three separate occasions, each of which happened when she was the only person here.  We heard nothing. We continued our exploration, noting a few bemusing occurrences, but nothing really out of this world. The scariest thing that happened on that first sweep was when we opened the door to the old bank-style vault on our ground floor, when—all of a sudden—we were met with a bloodcurdling screeeaam! It turned out to be Team Not A Ghost, who had planned to scare us but apparently we opened the door too quick and the scare rebounded back on them. “Aaaugh!” they went. We went “Aaaugh!” right back at them. Then we continued our investigation. 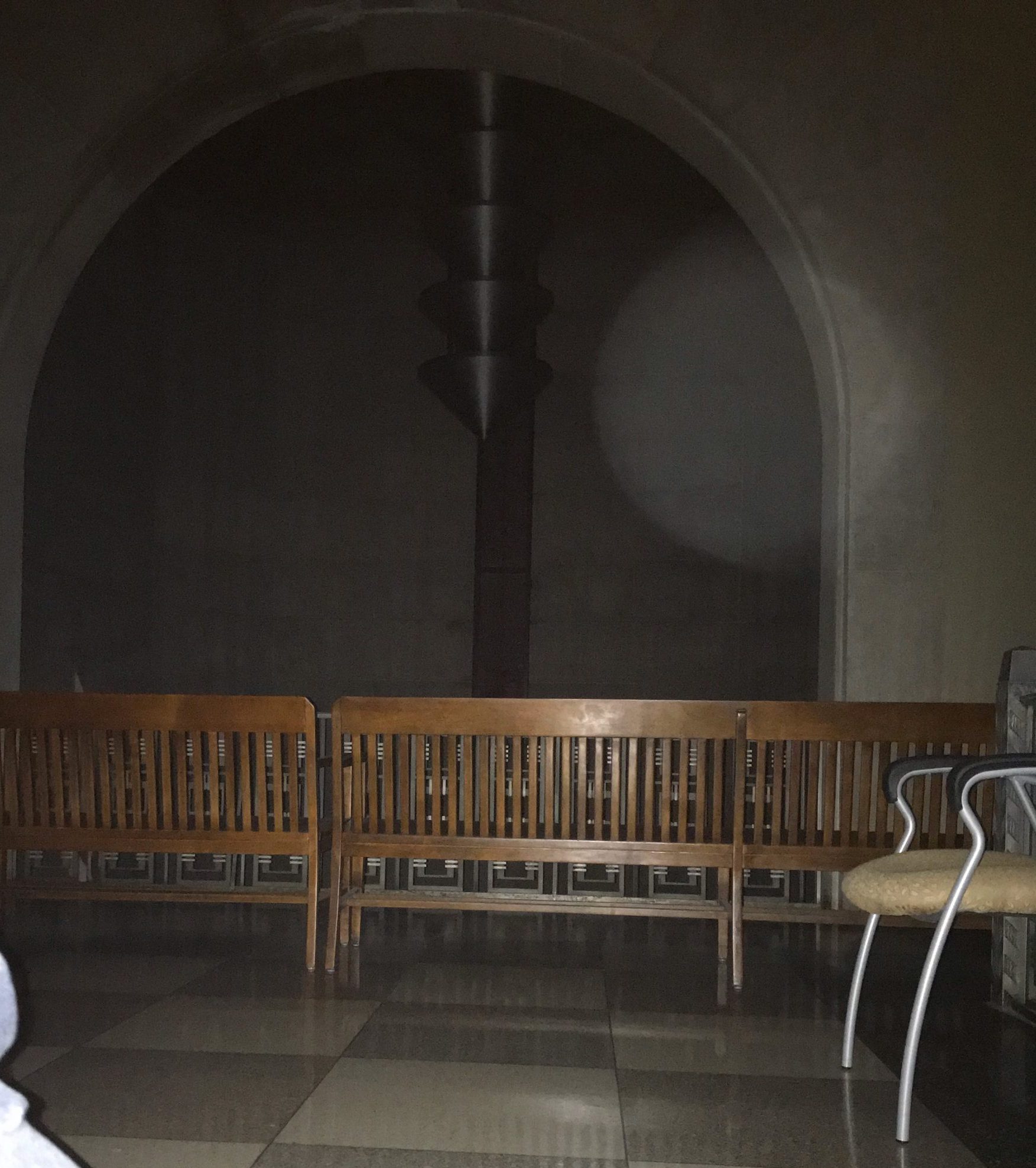 Next it was our turn to staff the monitor screens at our base camp, one of the building’s first-floor meeting rooms. Again, we didn’t see anything bone-chilling, just a scattering of orbs, which may have been spirit matter or may have been dust. The cleaning crew (the non-creeped-out ones) had just departed and the place was pretty clean, but who knows? Team True Believer did produce a picture of a pretty good sized orb that night, which, if we have dust motes the size of human heads floating around our building, we may want to have a word with that cleaning crew. Other teams reported sudden drops in temperature when entering one specific room in the basement; we noticed the same thing. In the adjoining office, one team noticed a coffee maker that flicked on. Power surge? Could be.

So we were getting ready to wrap things up. Team PIO headed out for one last sweep of the premises, and this is where it gets weird. We’re rounding a corner on the first floor, we walk past a janitor’s closet with a firmly locked door, no PIN pad, you need an old-school key to open it… and it unlocks and springs open. Springs open with enough force that it bangs against the wall, bangs against the wall hard enough to start its way back to closing shut, but instead of closing shut it bounds back and comes to rest against the wall. Now, before we started this whole thing, Nick and Lori made a thorough check of all of the doors in the building, making sure they were all locked up tight. Lori confirmed that this door was locked.

After this happened, I stepped inside the closet with an EMF detector (because I figure I’ve had a good run in this life so why not go out on a high note?) and noted a spike in energy from 0.4 to 1.4 gauss. I pushed the door shut firmly enough that it locked again. Then I slowly turned the handle and the door opened on its own. Amy was on the other side of the door and she asked “Did you pull?” And I said “no, I thought you pushed it.” Neither of us exerted any pressure. Door opened and closed on its own.

We summoned Team Expert, and Nick’s response when we told him what happened was “That is AWESOME!” We tried to replicate the event, but to no avail. But, and this is just a personal opinion, not speaking for the other team members, that was enough evidence for me that disembodied spirits may be out there. As I said, we came into this with no expectations, and in general I never had a strong opinion on spirits one way or another before that night. But now I do. I believe.

As we met in the base camp to share our impressions of the night, we agreed that no one felt any sense of malevolence, or that we were in the presence of anything that meant to do us harm. All in all, it was a fun and thought-provoking experience.

Many thanks to Nick Schalles and our entire Information Technology department, for taking this ghost hunt to the next level. We would also like to thank Amy Martin, for keeping us organized. Finally, thanks to each of our teams—who would have thought that hunting ghosts would be so much fun?

Videos and Slideshow by Katie Wagner.