When teenagers experience periods of self-indulgence (isn’t that every day?), they often keep diaries to record their secret dramas. These periods may last weeks, months, or even years.

My period of self-absorption began in 1969 when I started a diary for a high school English assignment. We were reading “Walden,” Henry David Thoreau’s journal about living in the woods. We had to emulate him in our day-to-day logs.

Almost 50 years later, I’m still journaling, still self-absorbed and beating Thoreau at his own game, having kept a daily diary since age 13. What started as a passing fad turned into a lifelong obsession, culminating in a big box brimming with 55 tattered notebooks, their yellowed pages spelling out my humble life story, my unbridled thoughts sometimes hastily scribbled down amid stress, other times leisurely composed in tranquility.

Once I became aware of life’s transience, keeping a journal was my way of capturing each day on paper and storing it in a permanent utopia to which I could retreat.

In my early years, I was so prolific (long-winded?), occasionally I needed more than one notebook per year. Some years, being exceptionally verbose, I required several notebooks to express myself. 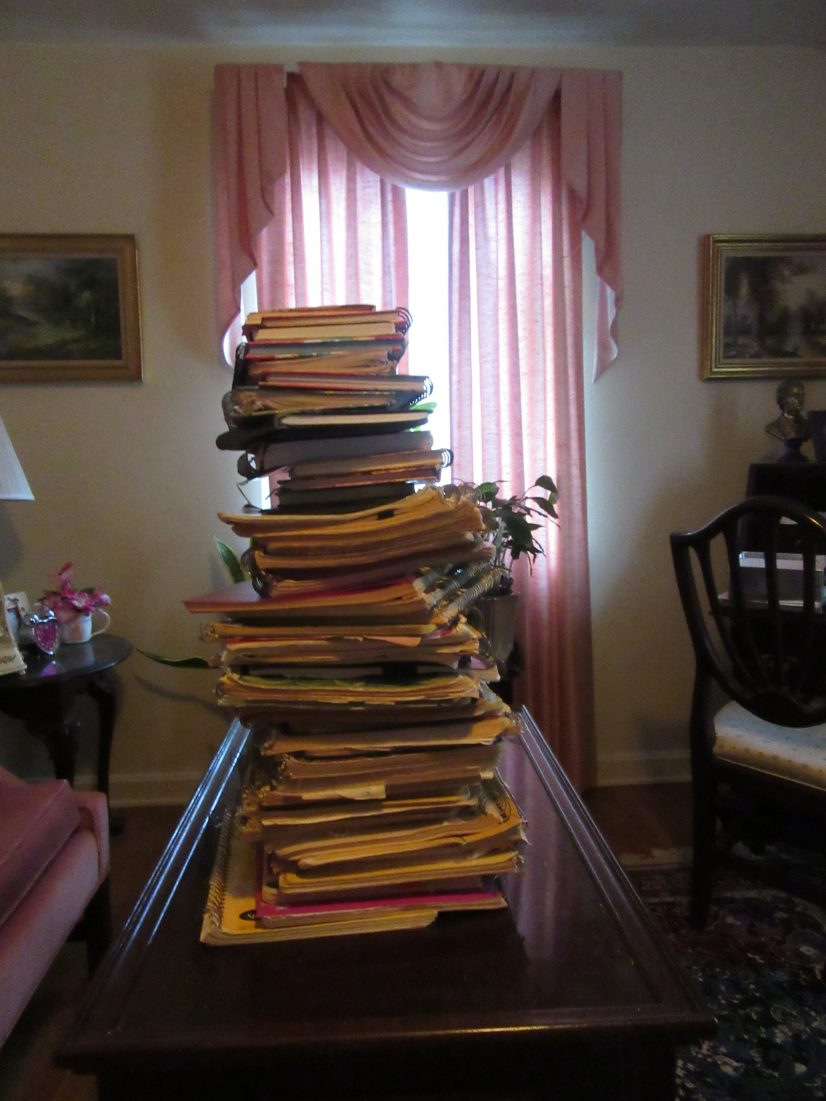 And express myself I did—raving about teen idols, like Bobby Sherman and the Young Rascals; rhapsodizing over my favorite football teams, the Penn State Nittany Lions and Los Angeles Rams; excoriating crabby teachers and stuck-up classmates; and expounding on controversies, like the My Lai Massacre, Kent State and Watergate.

Within those pages I paid tribute to rock bands like the Strawberry Alarm Clock with as much passion as I protested the Vietnam War, revealing my flower-child tendencies.

With youthful zeal, I exalted Mother Nature à la Walt Whitman, as in this passage from

With adolescent angst, I fretted over relations with the opposite sex, as I wrote on February 6, 1970:  “I’ve decided not to make a fool of myself over boys. I won’t run after them anymore. They’ll have to run after me!”

As I matured, my journal matured. Throughout the decades, I continued to chronicle historic events (the 9/11 attacks, the Iraq War, Columbine), but mostly, I became acquainted with myself, pondering my place in the world when recording personal milestones—attending college, becoming employed, getting married, buying a house, giving birth. While writing about myself, I also wrote about others, especially beloved family and friends, in times of joy and sorrow. My journal taught me to count my blessings and to be compassionate.

My journal was a haven where I sought refuge and found solace, a place where I confessed my sins after a night of drinking, partying, and suffering a hangover, and a sounding board where I vented my frustrations over unreasonable bosses without fearing repercussions.  Since I never intended to campaign for political office or commit a crime, I was confident my journals wouldn’t be made public, so I felt free to voice outrageous opinions and utter irreverent oaths.

The other day I piled my journals into five stacks, one per decade, and assessed their condition.  Some lost covers and have raggedy edges. Others are intact. Each comprises 365 days, except for two years which are out of sync.

In 1997, I was ill for six months and simply stopped writing. Once I recovered, I wrote a synopsis of the hiatus and picked up where I left off. In 2005, my luggage—containing my journal–was stolen during a Grand Canyon trip. (Did the suitcase snatcher read it?) No worries. Started anew. Summarized. Moved on.

Eventually, what should I do with my journals? Burn them in a bonfire? Bequeath them to my son? I have no illusions that my collection of ruminations will achieve immortality like the “Diary of Anne Frank.”

“Make inmates read them on death row,” my husband suggested. “Then they won’t mind going to the electric chair.”

But it doesn’t ban chronic self-absorption. Why not try keeping a journal like me? Frame your opinions. Elucidate your ideas. Set forth your unrestrained emotions like a self-indulgent teen, and in the process, “know thyself,” as Socrates once said.

After all, as Socrates likewise observed, “The unexamined life is not worth living.”

For tips on journals, check out these links: www.journalingsaves.com or http://lifehacker.com/why-you-should-keep-a-journal-and-how-to-start-yours-1547057185