Trace the commercial life of Mt. Lebanon—from unhurried days around a general store’s pot-bellied stove to the rushed pace of in-and-out errand—and you get a sense of the community itself.

Picture this: it’s a weekday morning in 1870, and the commuters on Washington Road consist mostly of cattle, sheep and hogs being driven from the farms to Pittsburgh markets. Sharing the muddy highway are farmers’ produce wagons heading for city markets and wagons heavy with hay and straw to be used in urban glass factories. A stagecoach bouncing between city and country stops at Five Mile House—the area’s only inn—at the ridge top corner of Washington and Cochran roads.

If you want to put a date on the birth of Mt. Lebanon’s business district, consider 1876. That’s when the first general store went up at the crossroads of Washington and Bower Hill roads, a simple frame building providing essentials to the cluster of homes and farms nearby. In 1883, the first post office opened in the store. The name “Mt. Lebanon Post Office” laid an early, albeit unofficial, claim to the name 29 years before Mt. Lebanon officially became a township.

In 1898, Kate and Park Algeo bought the frame emporium. Algeo’s general store contained “everything from the needle to the haystack.” By the time the Algeos hung their sign, the customer base was on the rise, and so was the neighborhood with a school, churches and new homes within walking distance. As the 19th century eased into the 20th, the area’s first telephone office was set up on Algeo’s second floor.

Other businesses scattered here and there in the early 1900s included a red brick building at 680 Washington Road occupied by William Lowe’s pharmacy and John Taylor’s grocery. Lowe later sold the brick building, which still stands, to pharmacist L.B. Finley, who opened Mt. Lebanon’s second post office in the building.

Local business was defined by the times: a blacksmith shop at the corner of Washington and Scott roads, Charles Puhlman’s greenhouse at Cochran and Osage, Couch’s Wagon Shop on McFarland Road and John McCormick’s cabinet making shop on Central Square. In the prerefrigerator days, George and Elmer Clatty operated an ice business at Cochran Road and Academy Avenue.

When the first streetcar clattered out from Pittsburgh in 1901, brand-new houses in and near the central area extended a welcome to middle-class professionals, executives and tradesmen seeking a fresh and fashionable kind of life. Little by little, farmers and miners were replaced by a new breed of settler—the suburbanite—who not only provoked the extension of local business but created it as well.

Among those who saw reason to invest in Mt. Lebanon’s future were Samuel and Mary Haller. They came to 616 Washington Road early in the 1900s. When Samuel Haller died in 1919, he left an energetic widow with six children and a personal mission to move both family and community forward. Mary Haller was successful; when she died at 83, her Pittsburgh Press obituary declared that “all Mt. Lebanon mourns the passing of its first lady.”

Mary directed a wholesale business and developed neighborhoods (including much of Hoodridge). Her purchase of the Mt. Lebanon Garage in 1919 at the corner of Washington and Shady Drive West was a good move in a community that was beginning to swell with commuters. That repair shop eventually expanded to sell new cars, and many a first car purchase took place on the block that today is occupied by Rollier’s.

Meanwhile, Beverly Road began to develop when the Liberty Tunnels opened in 1924. Garages were big in the area—Robert Roegge’s service station at the intersection of Beverly and McFarland roads, Beverly City Service at the intersection of Beverly Road and Ralston and Murray’s garage, which became Hudson Auto Body, in the Beverly business district. Over the next 10 years, garages and gas stations would spring up along Washington Road, Cochran Road and Castle Shannon Boulevard. The automotive era clearly had arrived.

Pharmacist Jack London, who died earlier this year, operated a series of local drug stores. In contrast to the massive drug chains of the current era, London epitomized the independent pharmacist who dispensed everything form drugs to sodas. He recalled those days “when steady customers just dropped by to say ‘hello’ on their way to the shoemaker.” London’s first store was located in the Lebanon Hall Pharmacy near the corner of Washington and Bower Hill roads. Between 1950 and the mid 1970s, he opened Cedar Pharmacy at the corner of Cedar and Washington (now the Cyclops Building), Sunset Pharmacy on Castle Shannon Boulevard, London’s Professional Pharmacy in the medical office building on Cedar Boulevard and, with partner Marc Goldberg, Beverly Pharmacy.

In the 1950s pre-mall days, the mix of retail stores with a personal touch satisfied a less sophisticated population with a simpler lifestyle. Everyone visited the library in the municipal building. Children watched 17 cartoons at the Denis, munched penny candy and ice balls from Mandell’s pharmacy and trudged home with turtles from Murphy’s 5 & 10 or records from Gardner’s.

THE MALLS MOVE IN

When Horne’s moved out of Mt. Lebanon’s central business district after South Hills Village opened, several shops along Washington Road that had depended on walk-in trade closed. What had once been a street lined by storefronts seemed to be giving way to businesses providing medical, financial or other personal services by appointment.
Through the 1970s, however, efforts persisted to draw foot traffic to the central core. One of the more imaginative enterprises was the World’s Greatest Garage Sale, an annual event that drew people from all over the region. The North Garage was transformed into booths, top to bottom, offering funnel cake, collectibles and “junque,” and merchant sidewalk sales lined Washington Road. Another shot in the arm for the business districts was a 1975 change in the liquor laws permitting hard liquor to be sold in restaurants. 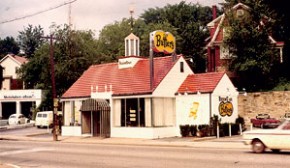 By the early 1980s, some storefronts were empty and others underutilized, lending a shabby look to the central business district. However, the street was in better health in one way. Block after block of Washington Road was now owned not by absentee landlords as in the recent past but by residents. Property ownership by locals reflected an investment in both infrastructure and in the community’s economic future. Many thought the imminent arrival of a new light rail transit system would present officials and businessmen with a one-time chance to move things forward.

By 2000 Mt. Lebanon seemed to have achieved a workable balance between retail and service businesses with attractive and well-patronized destination stores and restaurants in every business district. The Washington and Beverly business districts got makeovers thanks to the business community and the municipality, which had helped secure several matching grants for facade and streetscape improvements.

Coffee shop barristas have replaced soda jerks. Gourmet pizzas eaten alfresco with a glass of Italian wine add a touch of cosmopolitanism. Mt. Lebanon’s central business district—which soon will have a hotel and a reopened theater—comes alive thanks to summer First Friday events, Saturday farmers’ markets and innovative year-round events sponsored by the business association, the municipality and the Mt. Lebanon Partnership. Mt. Lebanon’s other business districts—along Beverly Road and Castle Shannon Boulevard—are thriving, thanks to an investment by shop owners, many of whom host original events in their stores or along the street.

As the campaign to shop local sweeps across the nation, Mt. Lebanon residents might wonder what the fuss is all about; we have always treasured our local stores.

In 2000, mtl magazine released The Way We Were, an 86-page history of Mt. Lebanon. mtl staff writer Alison Nipar oversaw the project as a Duquesne University graduate school project and magazine writers and contributors wrote the nine chapters. Photos were collected and long-time residents consulted. The book was a big success—enough preorders were placed to pay printing costs—and it eventually sold out. As Mt. Lebanon’s centennial approached, mtl staff discussed  reissuing the book, but with last year’s publication of the Historical Society of Mount Lebanon’s photograph book, Mt. Lebanon (published by Arcadia), the effort seemed a bit redundant. But it seemed fitting to revisit the book during Mt. Lebanon’s centennial year. So mtl will be running excerpts from The Way We Were throughout 2012—every month will feature a different chapter—with some “new” pictures—and complete chapters will be posted monthly on www.mtlebanon.org.
Related Stories