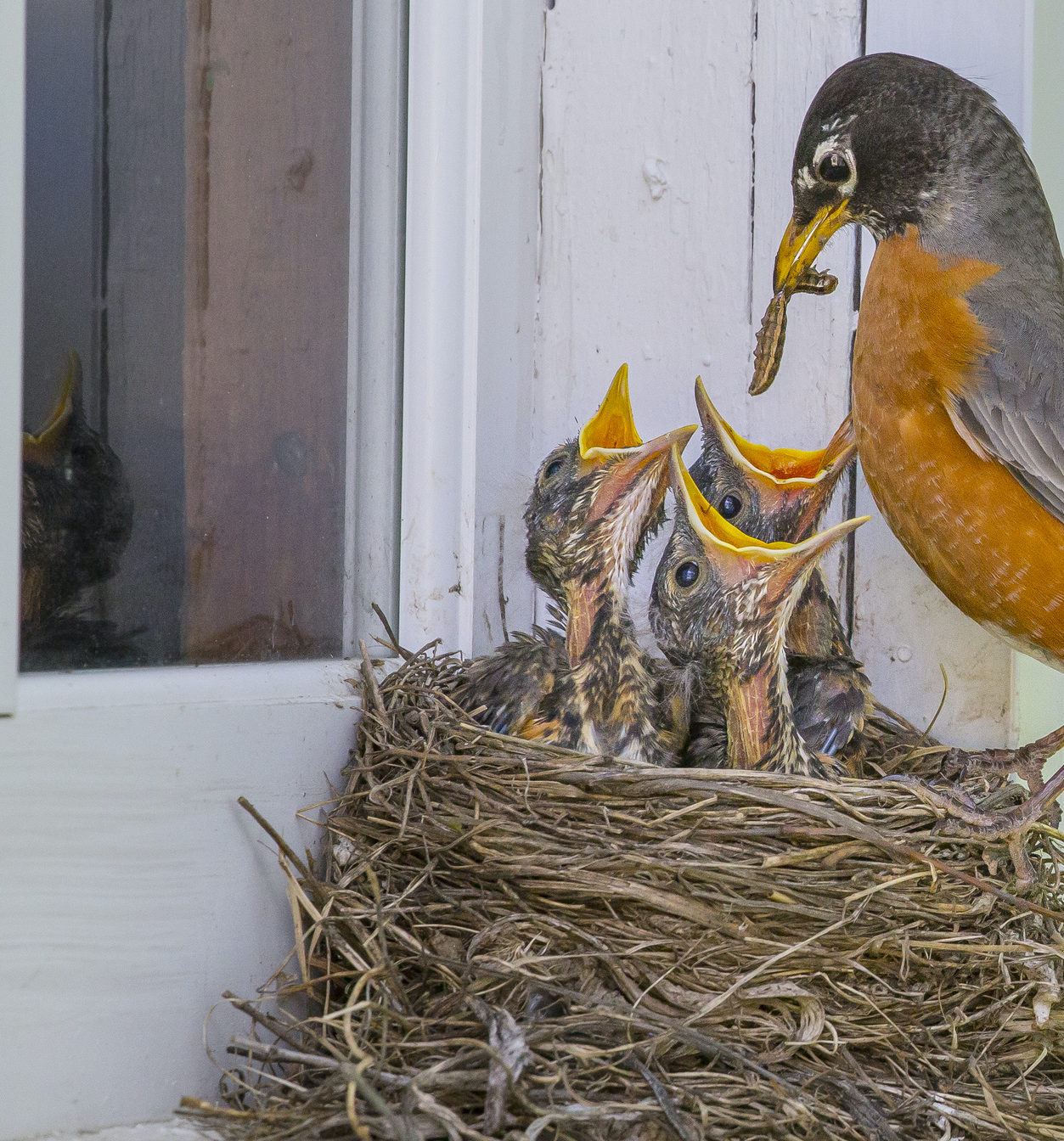 One Spring, a bird built a nest in the flowered wreath on our front door, moved into it, and laid eggs. She sat in the nest most of the day and sang; we could hear her throughout the house.

The front door had a small window, so my three children placed a chair against the door and spent much of their time each day climbing up and down to peer at the mother bird. We stopped using the front door and posted a sign directing all visitors through the garage so as not to disturb the mama bird. We lived like this for a few weeks, entering and exiting the house through other doors and not letting anyone disturb the bird family.

I think the mother bird got used to the giant children’s faces a few inches away, peering and smiling at her. I wiped nose prints from the glass. Admittedly, I wiped off nose prints nearly every day and found myself talking to the mother bird as well. The kids never scared her, only smiled at her and talked to her softly in case she could hear (or understand) … And she never flew away, only looked at them and chirped.

Then in early May, the three little eggs hatched and we had three little baby birds to hover over. Each of my children claimed one bird as a best friend and decided that the mother and I could be best friends because we had so much in common (being mothers).

The children spent most of the next few days peering at the babies and watching the mother fly away, then return with food. I let them watch as much as they wanted because I was happy that most of the time they were able to share one crowded chair. But when they started pushing and shoving each other off the chair, the viewing stopped.

Eventually the babies developed their own voices, and soon we learned to distinguish when the mother bird was at the nest and when the babies were alone.

The birds quickly grew from itsy bitsy oddities to round little balls of feathers who started acting like siblings in a crowded nest. Their mother would leave them alone for longer and longer periods of time, but we could see her (and hear her lecturing the babies) on the tree branch just a few feet away.

For some reason, the birds chose Mother’s Day to make a lot of noise and then leave the nest.

Except …two birds were able to fly easily to their mother in the tree branch, and one bird fell to the ground.

My children were watching, of course, and as soon as the baby bird fell, they jumped off the chair and threw open the front door to rescue it. The bird was fine, and when the door opened, it casually hopped into our house.

The bird hopped straight into the living room with my children following immediately behind. The group circled the living room, all chattering with excitement, rounded the couch and settled in a sunny spot in front of a picture window for a few minutes.

Outside in the tree, we heard the frantic cries of the mother bird. Inside the house, I was trying to corral the kids and the bird in the loudest whisper that I could so as not to add to the commotion, but it wasn’t working—everyone was too excited.

My older son wanted to call Animal Control.  The younger two wanted to buy a bird cage and started fighting over who got to sleep with the baby bird.

I pointed out that the mother bird was outside, worried about where her baby was, so we were going to help the baby find its mother.

So the children gently coaxed the baby bird toward the front door. That took about half an hour because the baby bird was, by that time, thoroughly confused and a little scared, although I was amazed at how comfortably the bird and children got along. Eventually the baby bird got to the front door, and when the mother bird saw her child, she quieted down a little bit. I felt her relief as much as I had felt her anxiety.

The baby bird sat on the doorstep a minute or two more and just chirped to its mother a few feet away. She chirped back. How many times had I scolded my own children with “where did you think you were going” or “don’t you know never to walk into someone’s house without being invited?” My children stood respectfully with the baby bird in the doorway. We all knew that tone of voice.

Then the baby bird flapped its wings and flew straight up to the tree to its mother perched on her usual branch. She continued to chirp sharply as they sat tightly side by side.

There were no more birds in the bird’s nest after that, and we went back to using our front door. We occasionally left a pine cone peanut butter bird feeder on the tree branch, but I removed the wreath with the nest when my own children weren’t paying attention.

The bird family had moved on, but some universal truths about mothers and children from that Mother’s Day stayed with me and my family. For me, it was the epitome of what being a mother is about, the phrase “leaving the nest” being too literal for what would eventually happen in my own life. For my children, it is a reminder that mothers worry about their children, especially after the children have left the nest.