Have you made it to the Uptown Farmers Market?

My family and I made it to the first one, after Hornets hockey, just after 10 a.m., and after the rain had stopped. It actually was kind of romantic, in a Seattle kind of way. (My friend Daniel Pipetone, who was at the market earlier that morning, described the farmers market scene “Pike Place.”) 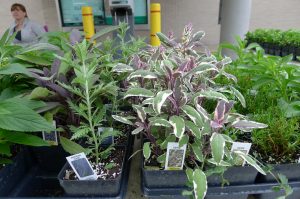 Even early in the season and unseasonably cold, the market was relatively warm. I had great chats with Francesca Howden, who with her husband, Bob Howden, and her dad, Chuck DiPiazza, who w (as born Calogero DiPiazza in Sicily), have started La Vigneta Winery. It’s in, of all places, the city’s Brookline neighborhood.

“I know there are no vineyards in Brookline,” one customer said to Francesca. But they were explaining how they make their wines there with juice they bring in from California.

They did it right, putting out a lovely tray of crackers and chocolates and offering people sips of their wines, which include “Autunno Petite Syrah,” a dry red that is their specialty, as well as a Sweet and a Semi-sweet Petite Syrah, and a dry Autonno Sangiovese. I tasted the Autunno Petite Syrah and liked it and bought a bottle ($17 with tax) for Mother’s Day dinner. 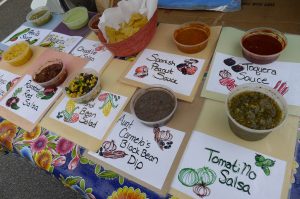 From the spots on the other side of the municipal lot, we bought roasted tomato salsa from Cinco de Mayo, and Mother’s Day geraniums and impatiens from Simmons Farm. Simmons also had cantalopes and potatoes, which of course weren’t local — not yet. The young people staffing the stand explained that they partner with farms in the South, where spring is a little further along. They figured this weather had their crops about two weeks behind.

We walked a block to where Zrimm Farms was selling plants, and bought some rosemary, parsley and sage. Then we visited with the affable Henry Nazarian at Najat’s Cuisine’s tented table, which was filled with Lebanese spreads, breads and pies. We bought some some bean spread and some bread. 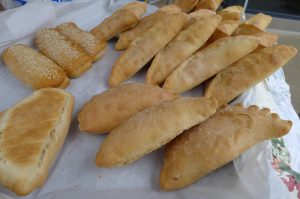 Not a bad haul for a first market day in early May.

You can check out the full lineup of vendors at the market’s website: http://themtlebanonuptownfarmersmarket.yolasite.com/.