It was 1954. I woke up after a nightmare. It was 10 o’clock at night and there would be school tomorrow. Second grade, more precisely.

I expected to be told to go back to sleep. But life isn’t totally predictable. Instead, my mother turned on the radio and told me that she wanted me to hear something she knew I would like. She was right.

From that moment, I became a fan of KDKA Radio’s legendary Party Line. It was riveting. None of my friends talked about interesting stuff like that. Actually, as far as I knew at that time, nobody did. A lot of it was over my head or beyond my seven years of life experience.  But that just added to the fascination: eavesdropping on the grown-ups.

Party Line was Pittsburgh’s first radio phone-in talk show. The hosts were a married couple, Ed and Wendy King. When he signed on the air each evening, Ed King described the show as a “conversational salmagundi.”  Then he would say that they would be discussing everything from soup to . . . and Wendy would chime in with whatever topic had been raised by the first caller. On Party Line, it wasn’t necessary for the hosts to start the conversation. People just called and talked about whatever was on their minds. 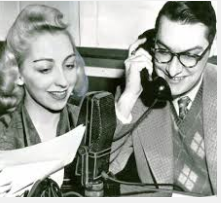 The phones were always jammed. If you were to have any chance to get through, you dialed all but the last digit and held on until one caller or the other was about to hang up. It was tricky – rotary phones took a couple of seconds to make the full rotation needed to register the final zero. If you dialed too early or held back too long, the connection would break with a fast busy signal. There were no extra phone lines at Party Line to stack calls. You had to synchronize your last digit perfectly with the last caller’s hang up, and even then, somebody else who was doing the same thing would probably beat you out. I remember hearing Wendy say that people started calling hours in advance. In fact, the engineers told them that the Party Line phones’ red lights were flashing at all hours of the day and night.

When I finally did get through, they talked to me with the same respect and attention that they gave to the adults. Ed and Wendy were two of those rare individuals who could have an interesting conversation with anyone, including a 7-year-old.

The calls were not screened. Unlike all later call-in shows, you couldn’t hear the other side of the conversation on Party Line. They summarized and edited what was said.  Ed and Wendy alternated talking into the microphone, sometimes during a call, sometimes after a call. Meanwhile, the other partner was frequently conversing in a soft voice on the other phone.

The conversation flowed seamlessly, changing topics without a hitch. These two were real professionals. They danced together like, yes, Ginger Rogers and Fred Astaire. They never ever talked over each other or stepped on the other’s lines.  All live, all ex-temp, always flawless. They must have had a fabulous marriage.

I was fascinated with everything they and their callers (they called them “Party Liners”) talked about. There was nothing heavy, no controversy.  There were remembrances of things I had never known and nostalgia for things I had never felt. People called in asking for arcane information: names, dates, places. There were no reference books on the premises – just the collective memory of Ed, Wendy and the Party Liners. Somebody usually called in with the right answer.

I could never do any of the featured nightly math problems. I probably still can’t. They would always ask the Party Liner with the right answer where he went to school. Most of the time it wasn’t Carnegie Tech. Instead, he would usually be a grad from a local high school.

I was, however, adept at solving Party Pretzels. Those were hard questions, the kind you usually couldn’t just look up in the encyclopedia. The Party Pretzel was open from 11 to midnight and more than one person could win. The hosts would announce all the wrong guesses, and sometimes that helped. Many times I knew the answer but couldn’t get through. I knew from the beginning that Grant was the only President who never voted for his own party until he voted for himself (Washington didn’t count). By midnight, Party Liners had guessed every other President but Grant and my dialing finger was swollen. I didn’t make it through that night. When you correctly answered the Party Pretzel you won a prize.  I had a few of them; bedroom trophies.

John Stewart, the host of Program PM, a news feature show in the time slot before Party Line, would frequently join in the discussion. One night, the Party Pretzel involved an inventor named Charles Moncky (they pronounced it Mon-kee). What did he invent? “I’ll take a wild guess,” said Stewart. “The monkey wrench!” After that, wild guesses were forbidden.

Of course, Party Pretzels wouldn’t work today. Everyone could Google the answer in a minute. I had to use Google just now to find out how to spell Moncky. Math problems wouldn’t be much of a problem today, either. There are apps for that.

Every night, Ed and Wendy read letters from listeners. There would be a new letter topic every month. In October, they always told ghost stories. They were the best ever – each topping the last. Today, the details of those stories are like foggy dreams to me. To borrow an idea from Maya Angelou, I can’t remember what they said but I will never forget how I felt. Laying in my bed in the dark, I would be scared out of my wits.

Other times, most times, I fell asleep while listening in bed. Sometimes I would fight to stay awake to hear the answer to the Party Pretzel, miss it and have to listen the next night for the answer. More than once I had to call in to ask about a former Party Pretzel that was absolutely driving me nuts.

I never met Ed and Wendy, but they were my friends. Over the years, I came to know them almost as well as members of my family – a Dutch uncle and aunt.

When Ed King died in 1971, Wendy immediately retired. KDKA asked her to continue the show, but she sagely observed that, without Ed, it would just be a monologue, not a conversation.

I was grown-up by then and an occasional listener. Only then did I wish I had listened more frequently.  I still do.