Here for the recipes? Click here to get the recipe for Totopo’s Fan-Favorite Spicy Pineapple Margarita and their Chipotle Chicken

“Our goal is just one, solid restaurant,” said Danielle Grimaldo during a Mt. Lebanon Magazine interview in 2016. She and her husband, Juan, were preparing to open their first restaurant, Totopo, in the massive space at 660 Washington Road. Now, five years (and one major pandemic) later, they’ve opened another location, Tocayo, in Shadyside, and their two food trucks are consistently serving up tacos all over the region. All because their Mt. Lebanon restaurant is “solid.”

“We sensed the excitement for a Mexican spot here … but we didn’t know the scale of the excitement until we literally opened our doors and we were like ‘woah! Everybody wants to be here right now,'” said Danielle. 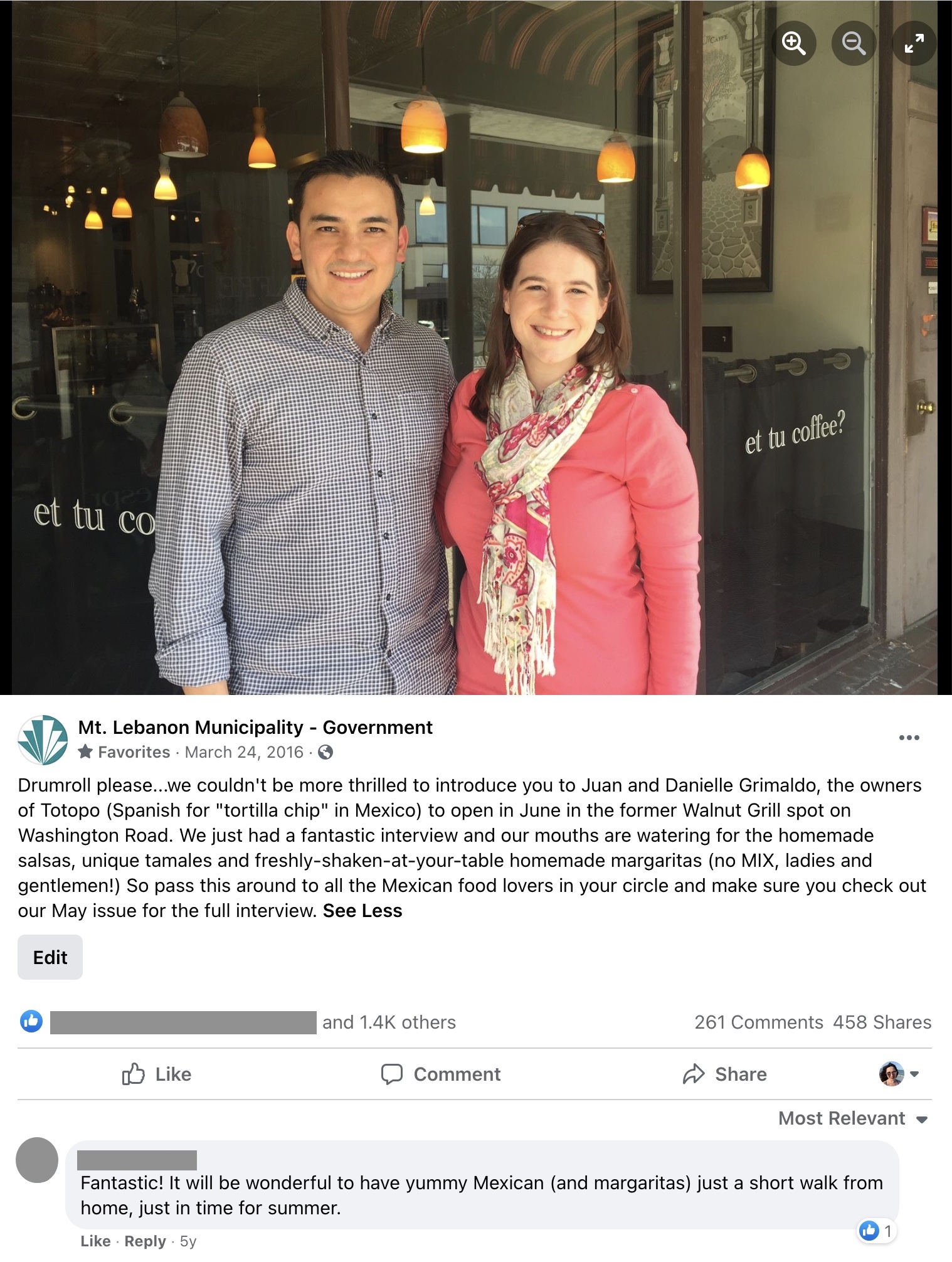 “I remember servers telling me in the first couple weeks that they would see people for lunch and dinner. And that was amazing,” Juan added. He believes a high-performing Mt. Lebanon Magazine Facebook post, followed by Laura Pace Lilley’s story in the April 2016 issue, fueled a lot of the community hype for their opening.

Originally from Leon, Mexico, and with a lifetime of experience in and exposure to the food industry under his belt—starting with his mother selling homemade enchiladas on the street in Leon during his childhood and culminating in managing three locations of Emiliano’s Mexican Restaurant and Bar in Pittsburgh’s South Side—Juan was ready to open a place of his own. The plan was for him to work six days a week, managing the restaurant, while Danielle helped out when she could with bookkeeping and marketing, since she worked full time as a school counselor in the North Hills. They did all of this while caring for their then-1-year-old son.

“The hardest part was the sacrifice at first,” said Juan. “I didn’t have a day off. I pretty much lived here. I would go home and didn’t sleep, for all the things I needed to figure out,” said Juan.

But they quickly hit their stride. Their first expansion was just two years later, when they launched the Totopo food truck, allowing them to serve their food at local festivals, like the Artists’ Market, and beyond Mt. Lebanon. Their primary goal was to help spread the word about the restaurant.

“With the food trucks, we ask ‘How far is our reach?'” said Danielle. “I have a friend who works in a rental car dealership in a small town in Alabama. She told me recently she saw a Totopo receipt in one of the rental cars.”

In August 2019, they opened their second brick-and-mortar location—followed shortly by a corresponding food truck—in Shadyside, called Tocayo, which means “namesake.” They decided to use a different name and concept so as not to diminish the qualities that make their Mt. Lebanon location unique. A much smaller space, Tocayo’s menu has fewer items, but it places more emphasis on tacos, including uncommon varieties like octopus tacos and beet tacos.

“Then, when we thought we had everything figured out, we had the pandemic,” said Juan. When the COVID-19 pandemic forced businesses to close in March 2020, Totopo immediately started offering delivery and, within two weeks, added online ordering to their website. As the pandemic progressed, they were able to keep their staff and customers safe by offering minimum-contact sidewalk pickup, and later, a designated pickup section in the former outdoor seating area.

“One of the great surprises was that the community really supported us. We had customers that sent us checks. Not even ordering, just sending us a check. That’s when I felt that they really wanted us to stay,” said Juan.

“Thanks to this restaurant, we were able to survive,” he added later.

Since the restrictions had lifted, Juan and his staff celebrated their fifth anniversary with specials and giveaways. They also planned a “Vote for Your Favorite Margarita” contest on social media and an evening of entertainment in Clearview Common, including a DJ, band and free salsa dancing lessons on Wednesday, June 2.

Now, he reports, business is almost back to normal, though they expect it will be some time before they see the bar as crowded as it often was during happy hour in 2019. So what’s next for the Grimaldos?

“Juan is the most entrepreneurial person I know. He’s always thinking of a next project … ” said Danielle. “I’d like to say, ‘[five years from now], we’ll still have the two restaurants and the two food trucks and we’ll be solid and be able to be more creative than ever.’ But knowing him, there’s probably going to be something else to come down the line.”

To celebrate their fifth anniversary, Totopo invited Mt. Lebanon Magazine into their kitchen and behind their bar to share some of their most popular recipes with the community. First, bartender Bollo taught us how to make the Spicy Pineapple Margarita, which won the “Vote for Your Favorite Margarita” social media contest. They announced it on Facebook Live, with the help of two local social media influencers, during their fifth anniversary celebration on June 2. 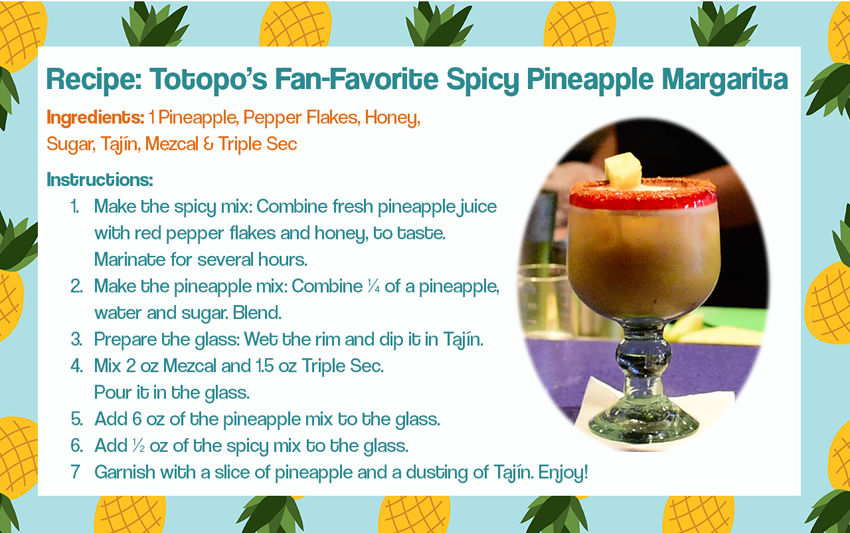 And finally, here’s the recipe for one of their most-ordered items, Chipotle Chicken. Please note that chef Gregorio isn’t using exact measurements, so we’re not even going to try to guess.

After filming this video, I (the author of this story, Katie. Thanks for reading!) put the recipe to the test on my own. Here are a couple things to note:

In spite of all of all of this, it was good. I’m not going to say it was as good as what you get at the restaurant, but it was pretty close.

Please enjoy this video. Many thanks to the Totopo team for inviting us, and to Mt. Lebanon Magazine’s summer intern Lilly Kubit for being our videographer for the event.