A Note from the Editor (scroll down to read the blog):

We were absolutely delighted by the popularity of this blog. We always think our content is pretty cool, but the stars really align in those instances when our readers overwhelmingly agree. However, because the Nike Missile Site is obviously a topic of interest for many, we’d like to make a couple additional points:

First, we do not condone trespassing. Ever. For any reason.

Second, in the blog below, our writer observed that the site was deserted and appeared “devoid of life,” but we received a handful of comments claiming that the Nike Missile Site is still in use … so we located and talked to an expert.

It turns out the commenters were right (and so was our writer—you’ll see what we mean).

Over the years, he gained a lot of inside knowledge about the former Nike Missile Site, but that actually wasn’t his only connection to it. His father, Jacque S. Minnotte, was chief of construction and engineering for the US Army Corps of Engineers, Pittsburgh District, and managed the construction of the site in the 1950s. He remembers visiting it with his father as a kid, back when its purpose still involved missiles.

“Today it is used by the [Federal Aviation Administration] as a long range radar site for Air Traffic Control,” said Minotte in a comment below. “Specifically, it is now used by the FAA’s Cleveland Air Route Traffic Control Center (ARTC), located in Oberlin, Ohio. The Oakdale Radar is also used as a backup radar source for the Air Traffic Controllers at the Pittsburgh International Airport’s Terminal Radar Approach Control to safely guide airplanes in and out of the Pittsburgh International Airport and the various other small airports in the Western Pennsylvania area.”

While speaking with him further, he elaborated on the topic: Pittsburgh International Airport is only responsible for about three miles of airspace around the airport. The Cleveland ARTCC manages much of the rest of the region—in fact, its airspace stretches almost all the way to Harrisburg, which is why the former Nike Missile Site is now a part of their radar network. But Minnotte recalls instances in his job at Pittsburgh International Airport when the radar would fail, so they had to rely on the site’s long-range data.

The radar inside this Cold War relic now operates on its own. An antenna inside the dome spins around, making a full rotation roughly every 12 seconds, to locate planes in the sky.

“Long range radar is a different kind of radar [compared to radar from the towers that you see at airports]. It can see hundreds of miles,” said Minnotte. “Once [planes] get up to cruising altitude, then these en route traffic control centers—I think there are are 26 of them placed all around the country—Their job is to handle the air traffic in the middle part of the flight, once they’ve reach cruising altitude. To make sure they’re safe and sound and not going to whack into anybody.”

So there you have it, folks! The Nike Missile Site was created to help defend our region during the Cold War, and now it protects us as we leave the region for work, vacation and adventure.

As far as the brewery goes, Millvale-based Grist House Craft Brewery announced in 2018 (using some neat drone footage) that they bought part of the property and would be using the old Missile Command Center (not the domed structure containing the radar antenna) as their main production facility and eventually a taproom. Last year, they started selling cans and merchandise for pickup from this location, and they are continuing to work on the space. Follow their Facebook page for updates.

Without further ado, please enjoy this blog, written by Diane Vrabel, which has led us down an intriguing path of local Cold War history discovery. 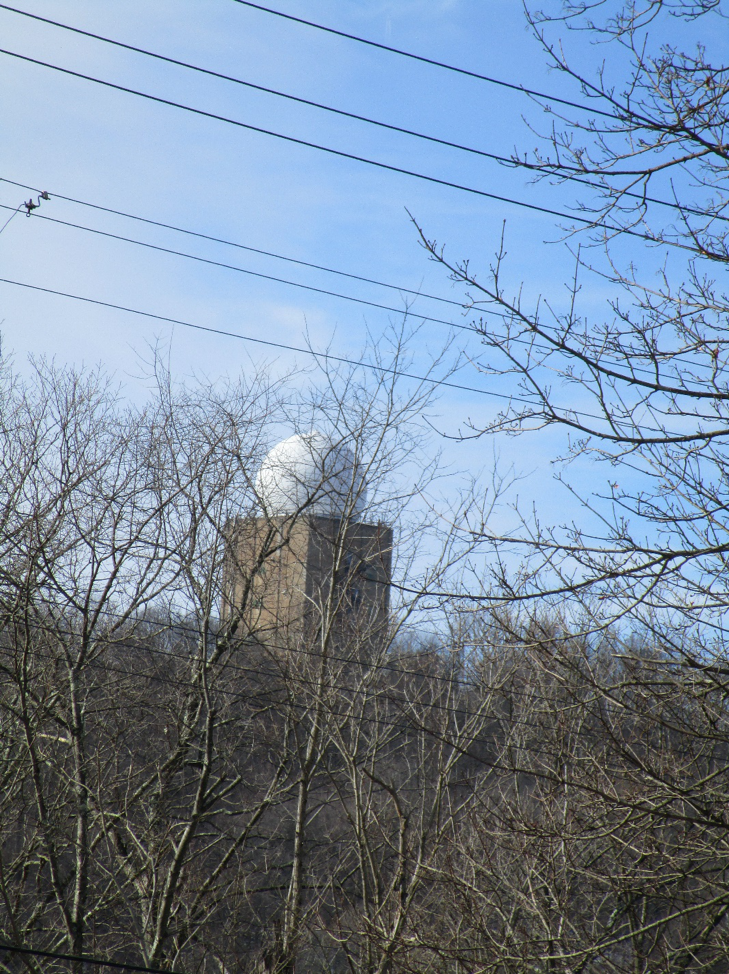 For years I wondered what it was, but was never curious enough to find out.

From various vantage points in the South Hills, I saw it in the distance poking its head above the horizon—a huge white globe perched atop a big brown block.

I observed it from Washington Road, across the street from Pamela’s Diner. I spied it through the trees from the playground behind Jefferson Middle School. I viewed it from Hilltop Road in Collier Township, from Carnegie Park off Greentree Road, and from Settlers Cabin Park in Robinson Township.

What could it be? Was it a water tower? An observatory? An alien spacecraft?

Seen through the eyes of a child, it was a scary sight. When my son was growing up, he described it as the monstrous head of The Wizard of Oz.

Finally, a chance conversation with a co-worker about a duck pond near the Panhandle Trail in Rennerdale led to a discussion about the ominous structure, which dispelled the mystery.

This puzzling structure was a radar tower from the Cold War era, used to conduct surveillance and detect enemy missiles and aircraft in the event of an invasion. My co-worker’s grandfather had worked there and told him the tower’s history.

Located off Nike Site Road in Oakdale—or Collier Township, depending on your reference materials—the radar tower was part of a military installation once known as the Nike Missile Master Direction Center.

During the 1950s and 1960s, the Cold War increased tensions between the United States and the Soviet Union, forcing authorities to confront the real potential for nuclear war. And those of us who grew up around here know that Pittsburgh was the steel capital of the world back then, making it a prime target for Russian aggression. So, it makes sense that officials took steps to guard the city against this dangerous possibility.

For security purposes, the military designated Pittsburgh and its surrounding suburbs as the “Pittsburgh Defense Area” and built more than a dozen missile launch facilities around the region.  These installations contained U.S. Army surface-to-air missiles and anti-aircraft artillery and were equipped to be armed with nuclear warheads, if needed.

The Nike Missile Center in Oakdale served as the command-and-control post for these installations, also housing missiles, bunkers and weapons platforms next to the dominant, can’t-miss-it radar tower. Situated on a hilltop on one of the highest terrains in the region, the Oakdale tower was strategically placed to be on alert for enemy air attacks from its heightened perspective.

Once I uncovered the secret of the Nike missile site, of course I had to pay it a visit to see it up close. It wasn’t hard to find. And despite “No Trespassing” signs, the gate was wide open, posing no barrier to entry. 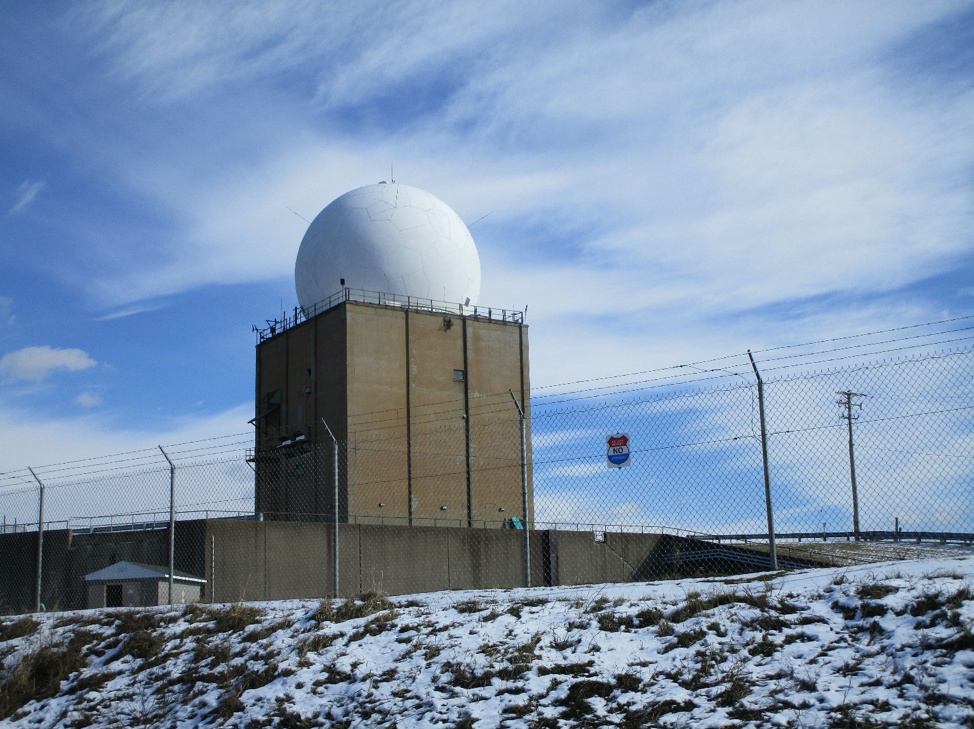 A stark scene lay before me, with no sound, no activity. The entire place was deserted and devoid of life. The radar tower loomed above me, resembling a giant soccer ball with convex pentagonal shapes outlined on its surface. It rested upon a cement monolith and overlooked a panoramic vista. Up close, it was impersonal, implacable and forbidding.

An abandoned military marvel, frightening in its implications. For I perceived this immense white globe as a symbol of the threat of nuclear war, humankind’s ultimate doom. The radar tower may now be just a vintage Cold War remnant, but it still portends the brutal potential for mutual self-destruction which everyone fears and which I hope is not inevitable.

Maybe it’s a positive sign that the Nike missile site will eventually be preserved as a brewery.  In 2014, the Federal government auctioned off parcels of the idled property and some parts are being renovated to produce craft beer. Better to serve a cold one than to serve a Cold War, I suppose. (Better yet to get blasted on beer than to be blasted by bombs!)

But the fact that we can see the Nike radar tower from everywhere is significant to me, regardless of its benign transformation into a beer factory. Its omnipresence is a constant reminder that danger in many different forms lurks around us and is unpredictable.

Somehow, I liked it more when the only image it evoked was a child’s fantastical vision of the Wizard of Oz.