Each week, I leave the Citizens Police Academy with one thought: Wow, their job is a lot harder than I ever realized.

This week, we learned about the South Hills Area Council of Governments (SHACOG) Critical Incident Response Team, also known as CIRT. Essentially, it’s a SWAT team that brings together officers from 22 municipalities to respond to the worst of the worst incidents.

They’re the ones who respond to barricade situations, when an armed person is refusing to cooperate. They deal with hostage situations, active shooters and high-risk warrant services. They were there for the recent Gilkeson Road incident—which was discussed at great length in class—and responded to help with the 2018 Tree of Life shooting in Squirrel Hill.

Since it’s fresh on a lot of Lebo residents’ minds, my classmates wanted to know more about the July 29 Gilkeson Road murder-suicide and police Chief Aaron Lauth took the time to explain exactly what happened. Instead of describing it myself, you can read the Chief’s own words where he describes what happened by clicking on this Facebook post.

On Tuesday night, we first heard from members of the CIRT tactical team.

As one of the officers put it simply: “It’s a demanding job.” From what I gathered, it’s a taxing job on these officers, both physically and mentally. People’s emotional reactions often come into play. And, no two incidents are ever the same, so they do a lot of training. Some calls keep them on scene for long periods (they talked about one incident that was 11 hours), and their equipment is heavy.

We were given the chance to test out the equipment and let me tell you: it’s heavy. I struggled to even lift up the vests that they wear and I was told that they were on the lighter side because they weren’t filled with ammo.

I can’t imagine standing in the blazing sun having to wear that, plus carry all kinds of gear, for that many hours. As the one officer said, CIRT team members have to want to do this job, because it is grueling work. 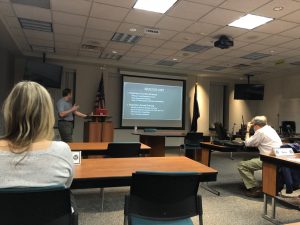 Next, we heard from Lt. Pat O’Brien, the team lead for the Tactical Negotiations Team, which is composed of officers from SHACOG communities, including three from Mt. Lebanon.

On scene, the basic goals of a negotiator are: To slow down the incident, de-escalate the crisis situation and focus on officer, hostage and bystander safety. Yes, you read that right, they try to slow things down. They want to learn about the person, listen to them and help calm them down.

A negotiator’s demeanor or manner of speaking matter, as does their attitude. A cardinal rule is to never tell the subject a lie. Building trust takes a long time, and the trust evaporates if the negotiator is caught in a lie.

“The main thing that we do is de-escalate,” O’Brien said. “The more you listen, the more you learn about them and the more they get things off their chest. We don’t rush anything.”

Next week, we’re learning about the police K9 program and the department’s drone unit.
Related Stories