A Guns N’ Roses’ cover of Knocking on Heaven’s Door blared from a boombox and bright sun streamed in the nearby window, two artists squatted on scaffolding perched above the stairwell in Markham School, their paint brushes poised to color in another portion of the jungle mural in progress.

Markham third grade math and science teacher Adam Humes and his father, George, an art teacher for 33 years at Harbor Creek High School in Erie, were about 100 hours into creating their third mural together (and their second for Markham.)

The new three-story stairwell mural shows a jaguar artfully drawn from an ad, crowned with jungle creatures and foliage, which combine to abstractly form the big cat’s visage. They traced the image onto a transparency, projected it onto the wall, then built scaffolding and sketched it onto the plaster before adding paint to bring it to life. “You just kind of bounce around,” Adam says about the color. “Once it’s started, the main thing is to stay out of each other’s way.”

While Adam is artistic, making jewelry and ceramics, “I’m not as good as he is,” he says, pointing to his father. George has tons of experience doing school murals, but there’s not much call for them anymore, with budgets being slashed and the availability of cheap oversized stickers. “Another creative career taken away by technology,” George says with a sigh.

The pair is painting for free. “Just for the gratification of everybody loving it and taking what was a boring wall and making it a painting,” Adam says.

The pair’s first Markham mural, in another three-story stairwell, depicts Jack and the Beanstalk. It was completed in 2009 to honor all past, present and future Markham students, in addition to then-principal Robert Mallery’s son John, a private contractor who died in Iraq in 2004. That mural has held up, requiring only a touch-up every now and then to cover an errant pencil mark or backpack smudge. (Their first mural together was completed while Adam was a student at Edinboro, his and father’s alma mater. It is a Steelers collage, on a building on Route 6 North, in Edinboro.) 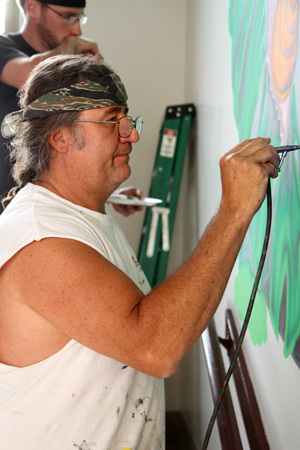 The jungle mural, dedicated to all Markham teachers, past, present and future, is right outside Adam’s classroom.
Adam, who may wear leisure suits to class, don funny wigs or show up in Steelers gear, is wildly popular. When students see him in public, they yell “Huuuuumes” and even don paper masks of his face. “I am not the typical or average teacher. I do just about everything different than that of the norm, on purpose,” he says. “ I celebrate different, sometimes wild and crazy, and my students respond.” At the district’s annual Teachers vs. Steelers basketball game he organizes, kids often line up for his autograph instead of the pro players. “I try to make learning as fun as possible,” he says. “I didn’t like school at all. All I could think of was going home, putting on old clothes and playing football.” with my friends. I want to make [school] a place that they want to be every day and go home and tell their parents about.”