The logo for native Pittsburgher Rich Brunn’s business, Rome Day Tours, is a sun, reflecting his use of the word “day,” his website notes, as “shedding light on Rome’s amazing attributes.” The tour guide, originally from Stanton Heights, knows his adopted city well; he has been living abroad for nearly 20 years.

Brunn went to Italy in 1998 to study for his master’s degree in theology at the same Pontifical University of St. Thomas Aquinas where Pope John Paul II got his doctorate. “For the first two years I focused on my studies,” he said, “but in 2000 I started working as a guide, pretty much as a way to support my education. It was the perfect time to start, with so many people coming to Rome for the Jubilee.”

Even at that time, Brunn decided that the ideal way of showing Rome was in private groups, where couples and small families were able to get the most out of their touring experience. Over the years, Brunn even taught a course on ancient Roman history at a nearby International School in Rome.

To become an official guide, however, he had to deal with the written and oral licensing system. Guides must be legal residents, which Brunn was, being married to an Italian woman with three children. Guides also must pass two written/oral exams, which is difficult, as they are available only sporadically. For example, one was offered in 2000, but the written section of the second exam wasn’t offered until November 2007, and the oral section was only finally offered in 2010. “So I was quite happy to take care of becoming legal as soon as possible,” Brunn says.

Much of Brunn’s business comes from word-of-mouth, along with his Rome Day Tours website. He offers a number of different walking tours and especially likes to work with visitors from his home country. “I really enjoy meeting up with Americans and sharing a bit of my adopted city with them. And every once in a while, fun things happen, such as having my third cousin contacting me.” 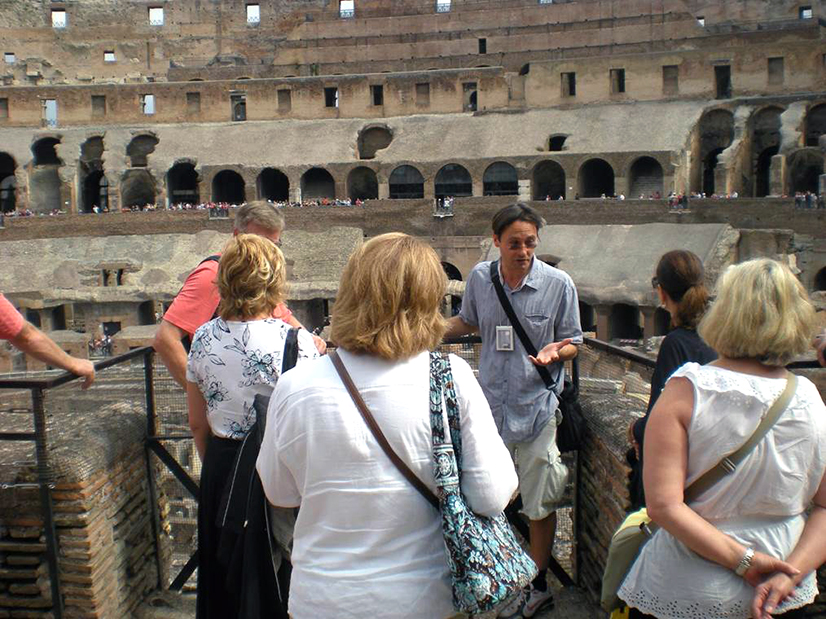 Bonnie Mesing, a 1976 Mt. Lebanon graduate and former resident of Academy Place who now lives in Canonsburg, and her husband, Ray, toured with Rich in 2014. They turned out to have a fun connection with, who was recommended to him by a friend. “When I talked with Rich I said, that’s a very unusual spelling of your name—that’s my grandfather’s name, Gus Brunn.” Genealogical research indicates that both are related to George Adam Brunn (1840 –1893), who had 11 children. Rich is the great-great-grandson of George’s son Charles, and Mesing is the great-great-granddaughter of George’s son Gus.

The Mesings, who toured with another couple, particularly wanted to see The Vatican. It fit perfectly with one of Brunn’s tours, and she was pleased with the service he provided. “He knew a way for us to get ‘in the back door’,” she said.”They allow private tours to do that in The Vatican. We didn’t run into any crowds. He was so informative and allowed us to take our time.”

Along with the main highlights of Ancient Rome and The Vatican, Brunn particularly likes the “historical center” of Rome—the area around the Pantheon the Spanish Steps and the Trevi Fountain. “It’s one of my favorites because it’s a nice a mix of all the different things Rome has to offer, a bit of ancient, medieval, Renaissance and Baroque—a nice, very walkable area.”

The friend who led Mesing to Rome Day Tours is Carolyn Mariano, of Wexford, who has used Brunn’s services on several trips. She learned about him in 2006 from her daughter ‘s Italian professor at Duquesne University. One of the things she particularly liked was Brunn’s use of an iPad during the outing.

“I started putting together my own visual aids years ago while teaching, “Brunn says, “and then simply continued the process as a way to add a bit to the tours.  Something such as a basilica—maybe half has fallen, but the other side would have been almost exactly the same. I can show you what the original would have been like.” Mariano adds that the iPad is helpful in some places, such as the House of Augustus, that are visible from the outside but now closed to tourists. “It has frescoes on the walls, but you can stand outside and he can show you [on the iPad] what it looks like inside.”

Joanne Christopher of Monroeville also learned about Brunn through Mariano. were on a planned tour but decided to us a private guide for the Rome portion because,” [Brunn] was so highly recommended. He was so knowledgeable. He’s fun and easy-going and adapts the tour to what you’re interested in.”

Christopher also appreciated the iPad: “It was fabulous.  if you were looking at a high ceiling with frescoes or something that was far away, he could give you a close view. It really enhanced it. We went to where Julius Caesar was assassinated, and he did an overlay of what it looked like then. This must be his calling.”

She was delighted that Brunn also took them to the Steelers bar in Rome, La Botticella de Poggi Giovani, where they met Giovanni Pogggi the owner. Poggi,  who was introduced to the Steelers by a group of Pittsburgh students studying in Rome who hung out at his bar, is now a friend and frequent Thanksgiving guest at the Mt. Lebanon home of Dan and Dotty Gigler. When he’s here, he tries to catch a Steelers game.

“If they are from Pittsburgh and we’re going through the historical center, a lot of times I will make a quick stop there,” Brunn says.“ Giovanni is super friendly, he realizes that the Steelers are world famous, and it’s a neat place where people who have a great love of Pittsburgh can go and meet up with others.”

Although many travelers don’t like to be restricted by an organized tour, Mariano explains the benefits of engaging a personal guide. “People who don’t speak the language could have language issues using a local guide. It’s nice to know someone who is a native English speaker but has been there long enough to really know his way around. That way you get the best of both worlds. And his tours are small, just a few people. He also has a religious background, which is helpful. He knows everything inside and out, and knows ways of expediting things.

“I also recommend planning in advance,” she says. “it’s not easy to make arrangements once you’re there. If you don’t know any better, you can really be taken advantage of.” And nice, as well, to tour with someone who might know the folks back home.