Kareem Abdul-Jabbar, the basketball star, recently wrote a piece in Time Magazine in which he made reference to the “Baader-Meinhof Phenomenon.” This is a characteristic of the human mind that, after receiving an interesting piece of information, begins to see more occurrences. This phenomenon is also called “disambiguation” and the “frequency illusion.”

For example, after buying new car, you may notice that the highway seems to be full of other cars like yours. The explanation commonly given is that the human mind is bombarded with so much information that it must screen out most of it and focus on a few things.  We do this, so it is said,  because our brains have a strong inclination to find patterns.

The words Baader-Meinhof sounded so familiar to me. Could this have been a term learned long ago in a Psych class and then forgotten?  Who were the scientists (or scientist, if this is a single hyphenated name) who discovered this Phenomenon?

Thanks to the internet, questions like this can be answered in a few keystrokes.There was no Dr. Baader-Meinhof.

The name Baader-Meinhof derives from an urban terrorist group in Germany in the 1970’s, also known as the Red Army Faction or RAF. According a website called Pacific Standard, the term was invented “in 1994 by a commenter on the St. Paul Pioneer Press’ online discussion board who came up with it after hearing the name of the ultra–left-wing German terrorist group twice in 24 hours.”

The word “Baader-Meinhof” is itself rather sticky.  A little hard to learn at first, but with repetition, it burrows deep into your memory. The term Baader-Meinhof has outlived the fame of its namesake (which most of us probably never knew, let alone remembered) but has periodically turned up in a lot of strange places. According to Wikipedia:

The name Baader-Meinhof may also refer to:

On the other hand, Dictionary.com does not yet recognize the term.  I say “not yet” because the cutting edge  Urban Dictionary does. And, of course, the term also has a Facebook page.

I must confess, I have Baader-Meinhof experiences all the time.  Here’s a recent one: Ever since reading “A Spork in the Road” by Marissa Lutz a year ago in the Lebolife blog, I notice kids wearing sporks walking around town  — not constantly, but I notice them. 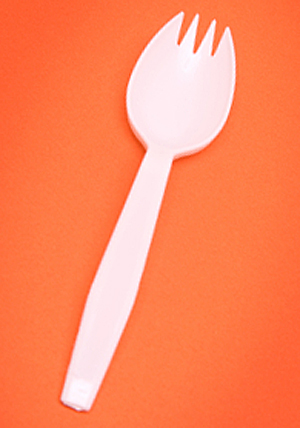 A spork, in case you don’t eat much fast food,  is a plastic fork/spoon.  As an eating utensil, the spork is, in my opinion, a failure.  It stabs you when you are trying to use it as a spoon and just barely performs the traditional cutting and spearing functions of a fork. It is the Edsel of tableware.

But the spork has attained new meaning with the invention of the Game of Spork. Like so many cultural phenomena, nobody knows the exact origin of this game. “A Spork in the Road” described how it was played by last years’ Mt. Lebanon High School Seniors. Players put $5.00 into pool. Then all of the players had to carry a spork with them everywhere. Players who were caught not carrying a spork were eliminated when stabbed by another spark-carrying player. The last Sporker standing was supposed to claim the pool.

The game was supposed to end last June when that class graduated.  But it didn’t.  The Game of Spork lives on.  A friend introduced me to her granddaughter in church last Sunday, who told me she attends Mt. Lebanon High School. Sticking out of a pocket in her purse was, yes, a spork. Misquoting Yogi Berra, it was Baader-Meinhof all over again.

From Google, it appears that the Game of Spork is alive and well as a lunchroom game.  And of course, the Spork Game has a Facebook Page.