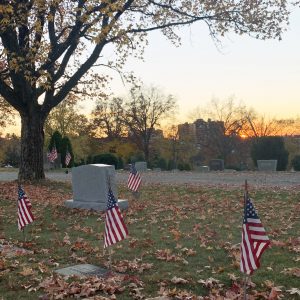 Residents who live near or walk through Mt. Lebanon Cemetery at sunset have become accustomed to hearing the sound of Taps echoing solemnly in the distance. Its origins are a mystery for many, because unless you happen to be near the military graves at the exact moment of sunset, you miss the man behind the music.

It started five years ago, after Randy Hass retired from his career as an airline pilot. He read an article about how fewer people were learning to play horn instruments, which was affecting veterans’ burial ceremonies. Without a live bugler, some were being buried to the recorded sound of Taps on a CD player and others were opting to be buried without the military honors they are due.

Hass recalled that when he was going through boxes in his basement and found his high school trumpet. He hadn’t played it in more than 50 years, but he realized he may be able to help.

“I’m not a veteran and I always felt guilty about not serving,” says Hass. “This is my way to pay them back.”

Taps originated during the Civil War, when bugles were the commonly-used military horn. Unlike modern trumpets, bugles do not have valves and produce a darker tone. However, with the rise in popularity of trumpets and cornets over the decades, they are also considered acceptable instruments for the playing of Taps.

Hass started by playing taps at military funerals through Bugles Across America, which provides buglers free of charge for veterans receiving military honors. It was difficult at first—he had to reacquaint himself with dynamics and “get rid of jitters.” He would often come to the cemetery at sunset to practice, which helped him adapt to various weather conditions and learn about the echo that occurs in outdoor spaces.

Coming to the cemetery became an almost-daily occurrence for Hass, and he started really enjoying it. He realized that cold temperatures affect the sound of the trumpet, so he made it his goal to play Taps in the cemetery each day—barring prior commitments like his kids coming over for dinner or his weekly bible study—between Memorial Day and Veterans Day.

Hass lives with his wife, Rhea, on MacArthur Drive. He’s originally from Indianapolis, Indiana, but he has lived in Mt. Lebanon for more than 40 years. His kids, Danny and Jen, both Mt. Lebanon grads, live in Bethel Park and Squirrel Hill, respectively.

“My hope is that this recognizes the veterans of Mt. Lebanon who served this great nation,” says Hass. “I play Taps as a prayer for eternal peace for these fine men and women.”