As a longtime automotive enthusiast, I often rely on the expertise and advice of others in automotive issues. I often received such advice at the historic Beverly Service on Beverly Road in Mt. Lebanon, from its longtime owner Jim Biery.

But this is not a tale related to cars.

Several years ago, Jim did a project for Jeff Lane of Lane Motor Museum in Nashville. Before Jeff picked up his project at Beverly Service, he wanted to see the world famous Bicycle Heaven, 1800 Preble Avenue, on the North Side.

After Jim and Jeff toured the museum, considered to be the largest bicycle museum in the world, he suggested I make a visit, too. I always trust Jim, so my wife, Judie, and I decided to make a short stop at the museum and have lunch nearby. Little did we know what an exciting adventure and visual experience Bicycle Heaven would create. Our short visit turned into a four-hour adventure and a photographic expedition.

Bicycle Heaven is located at 1800 Preble Avenue in the Casey Industrial Park near Chateau Street off the West End Bridge. As we entered, we saw rows of banana seated bicycles and many classic bikes. In all, Bicycle Heaven houses more than 3,500 bicycles of all shapes, sizes and models. 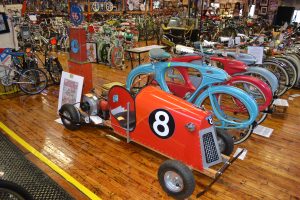 Bicycle Heaven grew out of founder Craig Morrow’s personal collection over several decades, but it also serves as a major bike shop and does consulting for prop agents for film, television and theatrical productions. We were amazed to learn the ground floor was only an introduction to thousands of bicycles upstairs.

Some of the most spectacular models on display included Bowden Spacelanders, produced in 1960. By the 1990s, only a few of the all-fiberglass bikes were left. Fortunately, Morrow collected 17 of the supposed 38 left in the world. Considered some of the rarest bikes, each is currently valued up to $50,000.

The friendly and supportive staff answered any question we had and ensured we did not miss the impressive second floor.

Judie and I saw a four-passenger tandem bike The Monkees used in one of their movies and the bike Viola Davis rode in “Fences.” Already an hour had passed and we still had not visited the main second floor. We saw wall-to-wall, ceiling-to-ceiling bike displays, including some of the most epic bikes ever made.

On the main floor, we saw Pee Wee Herman’s bike from “Pee Wee’s Big Adventure.” Close by sat a Hopalong Cassidy bike with appropriate cap pistols on the cross bars. A totally restored Donald Duck bike with a duck shaped headlight was restored to like new condition.

We later learned the museum has 27,000 additional bikes in storage. The variety was endless, from Luxury Liner Roadmasters, Monarks, Shelbys, even a Boop-Oop-a-Doop model. As we became totally absorbed in the displays, Greg Morrow noted our appreciation and came over to share his pride in the collection and its history.

One of the most amazing aspects of the museum is a photographer’s dream: a neon black light bike room with the walls covered by bicycle sprockets and gears in a variety of fantastic colors. Next to the neon black light room is a working model train on a 10-foot high track.

In one spectacular display, two bicycles appear to be growing in a tree. For the sports enthusiast, one of Craig Morrow’s sons developed an extensive Bobble Head Collection. Hours later, Judie and I left in awe from the visit. 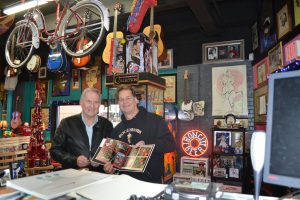 Our story didn’t end there. I returned to see Craig Morrow with a small gift of a 20-page photo book from our visit. Craig was so pleased, he asked me for an additional 20 books to sell in his shop. Craig also introduced me to neighbor Jack Hunt, who is well known as Johnny Angel. Hunt has his own amazing shop at 1800 Preble Avenue, called Johnny Angel’s Ginchy Stuff and Museum, filled with collectibles and antiques from the period of baby boomers and rock ‘n’ roll. Craig Morrow of Bicycle Heaven, Jack Hunt at Johnny Angel’s Ginchy Place and Randy Gilson of Randyland are considered the “Three Amigos of the North Side.”

After Craig showed Jack my photobook, Jack asked me to make one for his museum and later asked me to be his photographer for several concerts—but that is a another story.

All three stops are must-visits for anyone living or visiting Pittsburgh. Bicycle Heaven is usually open from 10 a.m. to 7 p.m. daily, since it does major bicycle repair. Parking and admission are free. www.bicycleheaven.org