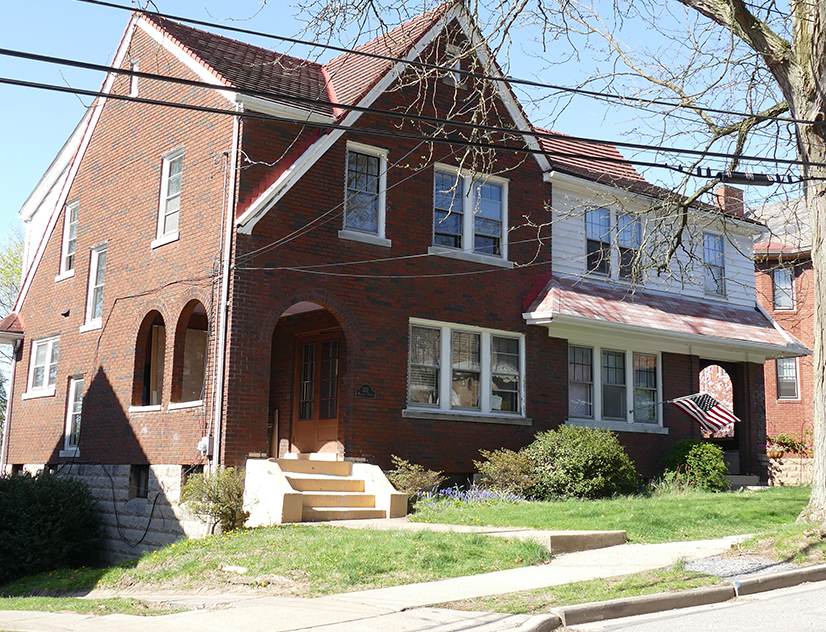 The mail slot in the bottom of the door at 320 McCully Street is a murky grey and hasn’t ingested a letter in years. But soon, not only will its utility be resurrected, it will shine. The stature of that and other fixtures around the duplex are being given new life by Avanti Construction thanks to the Federal Historic Preservation Tax Incentives Program, designed to incent property investors to rehabilitate historic buildings.

You might not think of the National Park Service while strolling through Mt. Lebanon’s 4,400-property National Register Historic District but savvy real estate investors like Saverio Strati and his business partner Salvatore Staltari do. The successful builders and Mt. Lebanon residents are serious architecture buffs, and when they learned they could receive a 20 percent tax credit for combining business and pleasure through a program administered by the state historic preservation office for the federal park service, they leapt.

“We were trained by architects when we were young and grew up to be builders. We’ve always loved beautiful structures and their elements. And, Mt. Lebanon has the most diverse architecture in Pittsburgh, in my opinion,” says Strati. He says he’s surprised more owners of income-producing property in areas designated as historic don’t take advantage of the tax credit program, and “build right,” following the Secretary of the Interior’s Standards for Rehabilitation.

Slate roofs and wooden windows may be key to the architectural integrity of the period of the home or building. In Mt. Lebanon’s historic district, contributing properties are of various architectural styles but all were built prior to 1945. These assets aren’t inexpensive to replace or repair, but the difference in character is immense—and, in the case of this program, money in an investor’s pocket. A rehabilitated space can command far more rental income plus the tax credit. In addition, preserving historic character can be an economic driver, maintaining or even boosting property values in the neighborhood and community.

After putting about $40,000 more into fixing up the unit than they would have needed to (but to qualify for the program), Avanti will get $1,500-1,700 in monthly rent for a  space that previously went for $950, Strati says.  He admits he would make more money in the short haul by just slapping a coat of paint on and fixing what’s broken.  “If we had just left it as it was, we would benefit more (financially),” he says. “But I’d rather invest in the community for the long haul. I’m not looking to flip or turn over.  This is my retirement … and we are counting on the equity we will get as the property appreciates.”  He hopes other owners of income-producing property will see the tax  credit as a good incentive and do the same.

Mt Lebanon’s historic district has only been listed on the National Register since 2014, so many owners of rental property may not be aware of the tax credit program. The municipality invited owners of income-producing properties (about 25 percent of local properties are rental) to a workshop to introduce the program when it became available, but only a roomful of property owners attended. And existing or potential property investors might be blinded by visions of paperwork, rather than buffing original brass hardware.

Strati admits that complying with the Secretary’s Standards and receiving the tax credit is not fast and simple. “It’s complex. There are phases,” he says. “There are ‘before’ photos a lengthy application. There’s some waiting. And sometimes there are stipulations, contingencies—like a mantel that might be there and must stay there. You may not agree with what they want—but they are paying you.”

If it’s intimidating to think about starting, it shouldn’t be. Would-be investors have a champion in Bill Callahan, Western Pennsylvania Community Preservation Coordinator with the Pennsylvania State Historic Preservation Office and a walking encyclopedia about this stuff.

“There are 4,400 places in Mt. Lebanon in the registry,” says Callahan, who chaired  Mt. Lebanon’s  historic preservation board when it worked with a consultant to prepare the nomination for the historic district. “The Commission invested time and money for a consultant to come.  The map showing the inventory [of historic properties] is on the website. Any of those [income-producing] buildings could take advantage.”

Although there is paperwork and a process, the expectations are quite generous, Callahan says. There are minimum expenditures relative to the value of the property and upgrades must be maintained for five years, but there  is a long, wide list of improvements that can qualify. An allowable cost can be something as straightforward as installing an HVAC system.

Strati and his partner try to maximize the opportunities. He says, “We have to buy them right. Not overpay. We try to buy properties that haven’t been too altered, that we know we can bring back. These old-world craftsmen, when they came here in the twenties, thirties and forties, they knew what they were doing, and the buildings have lasted. They’re well-preserved. They haven’t been changed; they just need help.”

The properties deteriorate sometimes more from multiple owners’ tastes and trends of the day. Think wallpaper, aluminum siding or concrete slab fireplaces. These “upgrades” shroud the structure’s natural beauty and make more work for the enlightened builder. That’s why it’s good original details such as perfectly preserved knobs and hardwood floors can be brought back to life with some skill and elbow grease.

For all its emerging “comeback kid” vibe, McCully isn’t exactly an inside-out, floor to ceiling gut job of the sort one might undertake if purchasing a “forever” home. This is why, as Callahan notes, it’s important to educate yourself about the distinction among reconstruction, preservation, restoration and rehabilitation.

“In this case, for this program, we are talking about rehabilitation standards—not restoration standards. The property owner is not required to restore—they work with existing conditions and preserve or treat sensitively existing stuff. They are not responsible for restoring past decisions like an ugly fireplace or awning.”

Avanti’s work at McCully is rehabilitation, the lightest of the four categories. The brass was shined; the crystal doorknobs were fixed and reused; the kitchen was gutted and replaced and they removed the radiators and put radiant heat in the floor. But the fireplace, with its 1980s veneer wasn’t touched. It was not required of the program and it’s perfectly intact, so they left it alone.

Strati strikes a balance. “When we tear out, we replace with a replica. If we can reuse, we reuse. Or we remake. Everything is consistent. You won’t see mismatched styles such as windows. These [original] windows are almost as good as a window you can buy today.” Allegheny Millwork & Lumber duplicates the original baseboards and moldings throughout the properties whenever original material cannot be saved.

Strati says people often ask him  if rehabilitating is worth it. “Well, it’s a 20 percent credit—I can’t tell you if it’s worth it to you,” he says, “but personally, I look at these magnificent large apartments in the community and wonder why those owners have not taken advantage.” Callahan says he often thinks the same thing when walking on Washington or Beverly roads.

In addition to money, a successful rehab means being able to see things as they were in another era and envision how they can make sense today, Strati says: “In the ’20s and ’30s, lifestyles were different. They didn’t have big couches and TVs. You’ll see steps in odd places. We bring these up to today’s standards of living. For example, we’ll put in a removable rail, so people can get furniture up the steps.”

Callahan endorses Strati’s approach:  “We are trying to encourage rehabilitation standards; to ask people to identify the historic characteristics of a home and bring it into modern use. You don’t have to take off siding, just keep historic features and put it into modern income-producing purpose.”