his year, regional leaders visited Dormont to celebrate the opening night of the Hollywood Theater. Natalia Rudiak of the Pittsburgh City Council and Kathy Risko of the Congress of Neighboring Communities (CONNECT) joined other invited guests for a screening of the two-part documentary, The New Metropolis (2009), by Andrea Torrice. After the films, the audience engaged in a civic discussion, a great twist on movie night.

Part one of the documentary, “A Crack in the Pavement,” discusses development policy in the United States and its consequences at the local level for early American suburbs. Part two, “The New Neighbors,” tells the story of Pennsauken, New Jersey, and how it met the challenge of white flight by using diversity as a powerful focal point for revitalization. At the beginning of the film, Torrice captures the enthusiasm with which our nation created its first suburbs. President Dwight D. Eisenhower extols the virtues of outward expansion with a thirst matched by the burgeoning middle class. The film then demonstrates how outward expansion remains the rule of the present. The money that gave rise to the early American suburbs continues to fund new development. New sewer lines. New traffic lights. New communities with larger homes and bigger dreams. The money has left the early American suburbs. 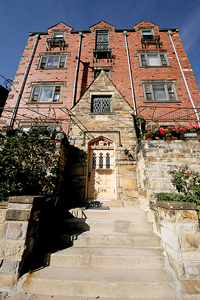 The Mt. Lebanon Historic Preservation Board plans to  nominate Mt. Lebanon to the National Register of Historic Places, a prestigious honorary designation that places no restrictions on what property owners may do with their properties. Income-producing properties in a National Register district, such as apartments, may receive federal tax incentives for property rehabilitation.

Mt. Lebanon has important commonalities with a community featured in the documentary: Madeira, Ohio. Madiera is known for its high quality services and schools. Elected officials do not want to raise taxes; residents do not want a decrease in services. In the film, Madeira City Manager Tom Moeller calls the costs of retaining a good reputation “astronomical.” The documentary grows increasingly bleak, as it tells the stories of suburbs hit harder than Madeira or Mt. Lebanon. Bruce Katz of the Brookings Institute explains that it is difficult to receive funding to repair infrastructure. Unable to maintain funding and facing the prospect of increasing taxes or cutting services, local elected officials fight to keep their communities out of the downward spiral of increased taxation and decreased population that has left many of America’s early suburbs vacant and impoverished. After the film paints a grim picture for the future of the early suburbs, metropolitan Minneapolis-St. Paul (MSP) plays the part of success story. Myron Orfield, land planning expert, explains that having one agency for regional development was a key to the success of MSP in managing growth, and he stresses the importance of a strong focal point for redevelopment and cooperation. In MSP, the focal point was transit; it turned federal transportation dollars into redevelopment money.

The policy issues in The New Metropolis are daunting, as outward expansion has little regard for the past or the future. At the same time, the documentary confirms what so many in Mt. Lebanon already know: we are fortunate to be in this place at this time. As it stands on the eve of its centennial, Mt. Lebanon has the opportunity to use its rich history as a strong focal point for community revitalization. The Historic Preservation Board (HPB) has developed a long-term plan for using this history as such a tool.

First, it’s important to know what makes Mt. Lebanon’s history special among early American suburbs. Mt. Lebanon tells the story of Americans leaving industrial cities for suburbs from the late 19th through the mid-20th centuries, by rail, trolley and automobiles. Growth began in earnest in 1901 when trolleys reached Mt. Lebanon from Pittsburgh, then expanded rapidly when the Liberty Tubes opened in 1924, years before the opening of New York’s Holland Tunnel. Its development in this time period separates it from most of the suburbs examined in The New Metropolis, which developed in the post-World War II era. Mt. Lebanon’s 1920s and ’30s neighborhoods were among the first in the country developed specifically for automobile commuters. Designed in the distinctive “Romantic Suburb” or “Garden Suburb” style popularized by the Olmsted family and others, the neighborhoods’ curved, landscaped streets follow land contours, and are lined with Colonial and Tudor Revival houses typical of affluent neighborhoods in that era. Mt. Lebanon had another growth spurt after World War II, as new houses were built in quantity for veterans, linking it to the excitement of the Eisenhower era. Indeed, Mt. Lebanon distinctly captures most facets of the early American suburb over a half-century’s time.

The National Register of Historic Places is a historic preservation tool that can add value to our community, making our homes and our schools more attractive to home buyers. The first thing you need to know about National Register status is that it places absolutely no restrictions on what property owners may or may not do with their properties. The second thing you need to know is that it comes with benefits. Income-producing properties that contribute to the significance of a National Register district have access to certain federal tax incentives for property rehabilitation. This is good news for our apartment building owners. In addition, the honor increases the marketability of all properties by authenticating Mt. Lebanon’s historic past. Arguably, the most important benefit is the inventory of our cultural resources we all gain. We will add to the historic value of our community by increasing our collective knowledge of our history and discovering more facets of our history that make Mt. Lebanon unique.

Civic engagement is key to the success of a National Register nomination. Nomination to the National Register of Historic Places is an arduous task, but the HPB is lucky to have the support of local leadership who understands the value of NR status. The Commission authorized funds for the nomination process in the most recent budget. Now the HPB needs the support of Mt. Lebanon’s residents. Over the course of the next year, the Historic Preservation Board will host public participation events to share the extraordinary history of Mt. Lebanon and to answer your questions about National Register status.

Let’s ensure that when they make The New Metropolis of Pittsburgh, Mt. Lebanon will be hailed as a success story, a community that used history as a powerful focal point for sustainable development and civic engagement.