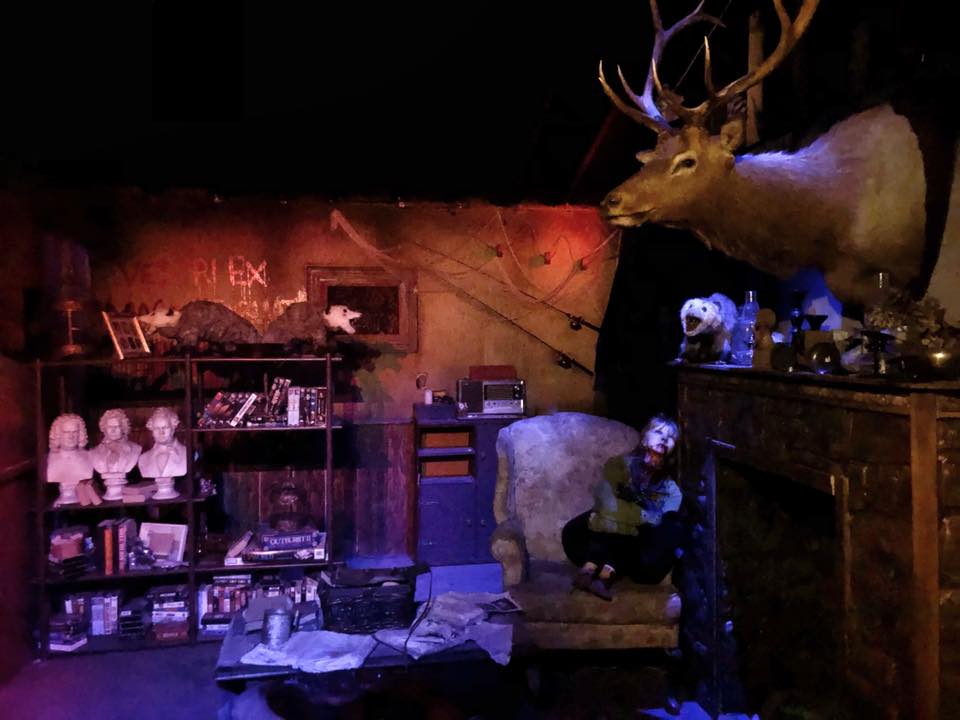 As the Halloween season hovers menacingly just inches away from us (maybe it’s watching you now; maybe it’s waiting for you to fall asleep), LeboLife bloggers will visit a few local scare houses.

So I’ve lived 10 minutes from South Park for going on 20 years and have never once been to Hundred Acres Manor, the haunted house that has been a fixture in the Pittsburgh BOO!! AAUUUGH!!! scene since 2003 and has received accolades from Good Morning America, The Travel Channel, Forbes magazine and, because why the hell not, Popular Mechanics.

Hundred Acres Manor is divided into six components, and it takes maybe half an hour to walk through. I showed up solo and was placed in a group of four, two dads with two little girls. I was glad for the company. There’s a lot of energy floating through the house, all screamy and thrash-aroundey, and being the sole focus of it could be a little daunting. Not that I was scared or anything. If that’s what you were thinking, then you thought wrong.

The first segment is The Lift, where you get shaken up and down and all around in an elevator that’s definitely not up to code. From there you move through plague-ridden London, alien-themed Breach 2.0, Voudou (speaks for itself), a haunted cabin in the woods and finally a Halloween party that gets way out of hand.

Actually, it’s easy to see why Popular Mechanics is so enamored—the animatronics are top of the line. Their werewolf game is strong. And while the noise level is predictably high, and the lights and jump scares assault the eyes, Hundred Acres doesn’t neglect your sense of smell. Shorting-out ozone and some indefinable bayou thing are just a couple of the lingering scents.

Work on the house begins as early as March. Auditions are in June and the actors, both paid and volunteer, begin working on their roles in July. New last year are a couple of non-scary kids’ days, where everything is taken way down, the actors ditch their deranged surgeon and demented scientist costumes and dress up like cows and bananas. Next kids’ day is Sunday, October 20, from 11 to 3.

In the briefing before you go in, even though they say don’t touch the actors, and the actors won’t touch you, even though they SAY that very clearly, there are a few of the actors who come close enough and project just the right amount of scariness that you think, “I don’t know, maybe he really IS going to use that chain saw on me.” And you clutch your pen in one hand and your emergency backup pen in the other and think “Eyes? Or jugular?” In a thoroughly enjoyable, non-terrified way. Haha, you say.

DETAILS Beginning Wednesday, October 2, Hundred Acres Manor is open 7-10 Wednesdays, Thursdays and Sundays and 7-11:30 on Fridays and Saturdays, until November 3.

General admission tickets are $23. VIP admission (skip the line) is $35 and Super VIP admission (skip the line and get a hoodie) is $50. Discounts for groups of 15 or more. Friday and Saturday nights the Scream Bar is open, featuring four Straub beers on tap. Other attractions are two escape rooms at $22 each, and for $5 apiece you can do a maze and also a simulated burial alive. (As someone who has some familiarity with the buried-alive game, I have to say five bucks is a phenomenal price. Try as I might, I could never do any better than $8.50. How are they doing it? Maybe not using chloroform?).

Hundred Acres Manor is a nonprofit 501(c)(3) that raises money for the Homeless Children’s Education Fund and for Animal Friends.