“This is so much fun!” a young boy shouted, as he and a group of friends tugged on a rope and pulled a rescue boat across the Mt. Lebanon pool to safety.

With their hands in the air—almost like they were on a ride at Kennywood—four youngsters made their way inside the boat across the pool.

It was a lesson in teamwork for kids participating in the annual Mt. Lebanon Public Safety camp.

“When we’re out on calls as the fire department, police and EMS, we have to work as a team,” firefighter Josh Sadowy explained to the kids. 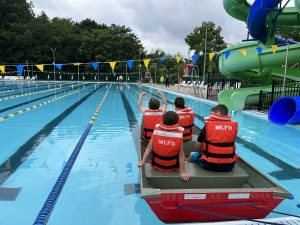 On Monday, they had the chance to explore police, fire and EMS vehicles and equipment. Tuesday was all about water rescue. Wednesday, youngsters participated in a bike rodeo and firefighting challenge, and even had the chance to make a splash in a parking lot filled with foam. Thursday, students took a field trip to the Pittsburgh International Airport’s Airport Rescue Firefighting Facility and on Friday, they witnessed a mock DUI crash. A vehicle was provided by McGann & Chester Towing to make the scene as realistic as possible.

The week is sponsored by the Mt. Lebanon police and fire departments and Medical Rescue Team South Authority, along with some help from the recreation department.

It’s all about learning while having fun, said Rodger Ricciuti, deputy chief with the Mt. Lebanon Fire Department.

“We’re trying to have them leave here with some situational awareness about some of the things they can encounter right here in town, such as flooding, storm damage… safety around service animals,” Ricciuti said.

The camp is extremely popular, filling up quickly each year, said Cpl. Jeff Kite of the Mt. Lebanon Police Department.

“It’s an opportunity for the kids to come in and learn about the different emergency services,” Kite said. “They get an understanding of what we do, how we work together…. It’s not always how it is in the movies or in the TV shows. A lot of times they’re not aware of everything that we do.”

During the water rescue training, Ricciuti explained the importance of staying out of flood waters.

“Is that all rainwater?” he said. “No!” the youngsters shouted in unison.

“If it’s not rainwater then what is it? It’s sewage,” Ricciuti said. “You should not walk through any rainwater. If you can’t see the bottom, don’t go through it.”

Youngsters were also taught to stay away from downed wires and call 911 if they see them.

Later in the day, the camp had a couple of special visitors from the Port Authority of Allegheny County police department’s K-9 unit. They had the chance to pet Mitch, a 4-year-old chocolate lab, and learn about the important role K-9’s play in public safety.

“You want to get them interested in stuff like this so that when they get older, they’re able to help somebody if they come across an injured person,” said Rick Weisner, a MRTSA EMT.