The theme of this year’s St. Patrick’s Day Festival and parade in Dublin, Home is Where the Heart Is, not only provided opportunities for gorgeous floats, costumes and creative programming opportunities—it also encompassed the sentiment that led me to the corner of Patrick and Kevin streets in Dublin, right outside St. Patrick’s Cathedral, in wintry conditions to await the world’s greatest St. Patrick’s Day parade on March 17, 2018. You see, for the first time in 10 years, my husband was back in his hometown of Dublin for its most anticipated holiday. Killian was finally exactly where his heart is on St. Paddy’s—he was home. 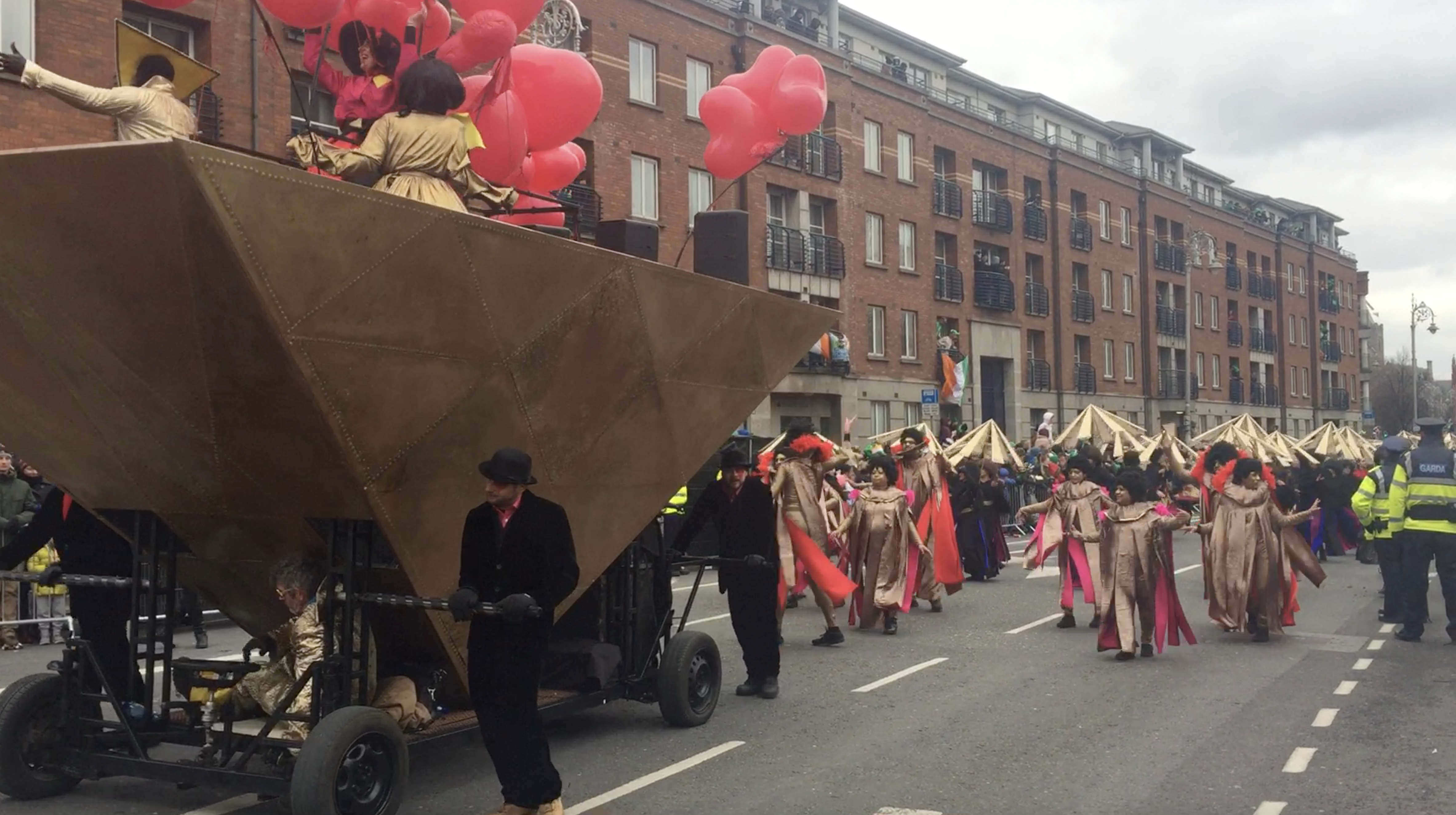 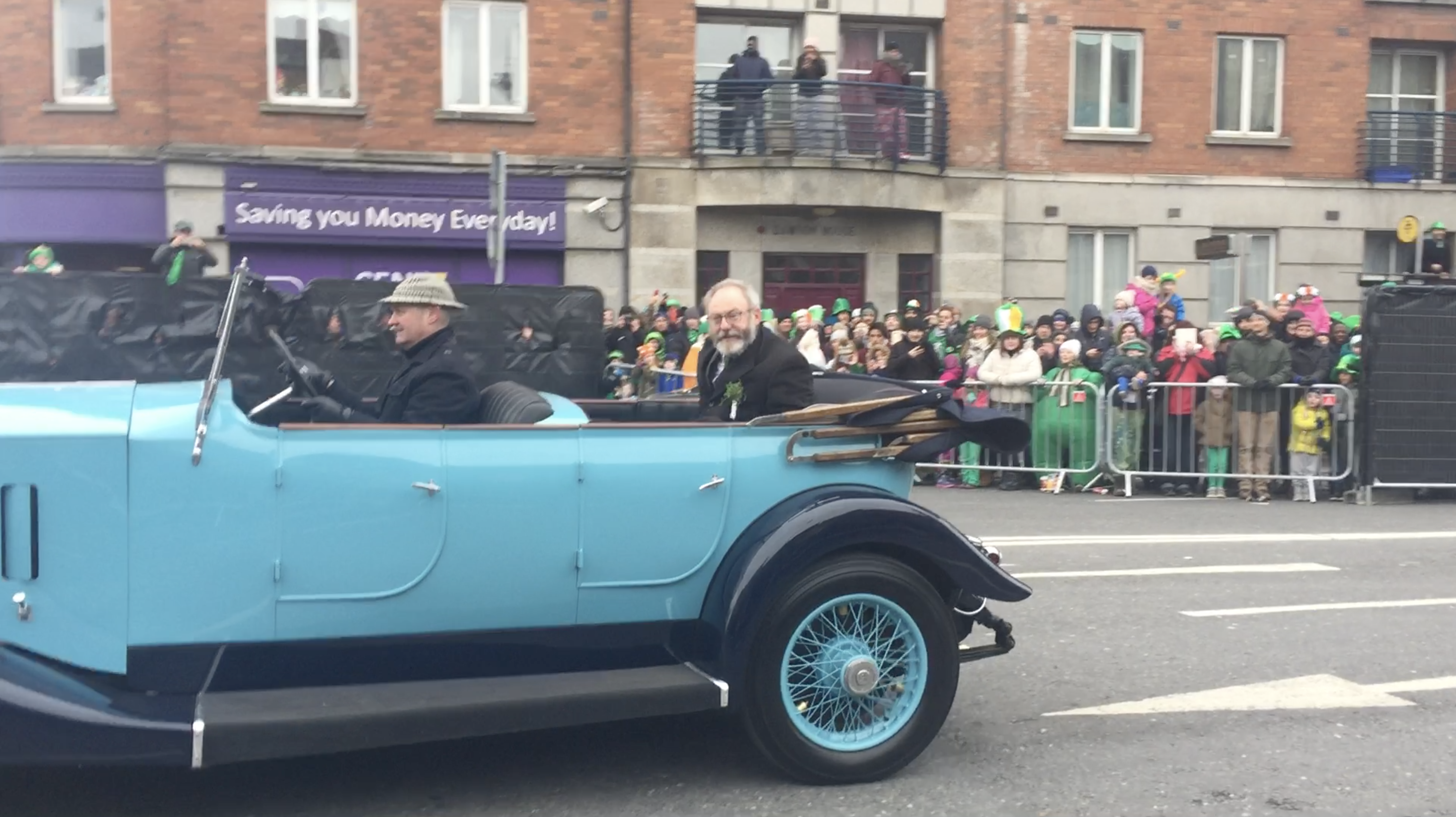 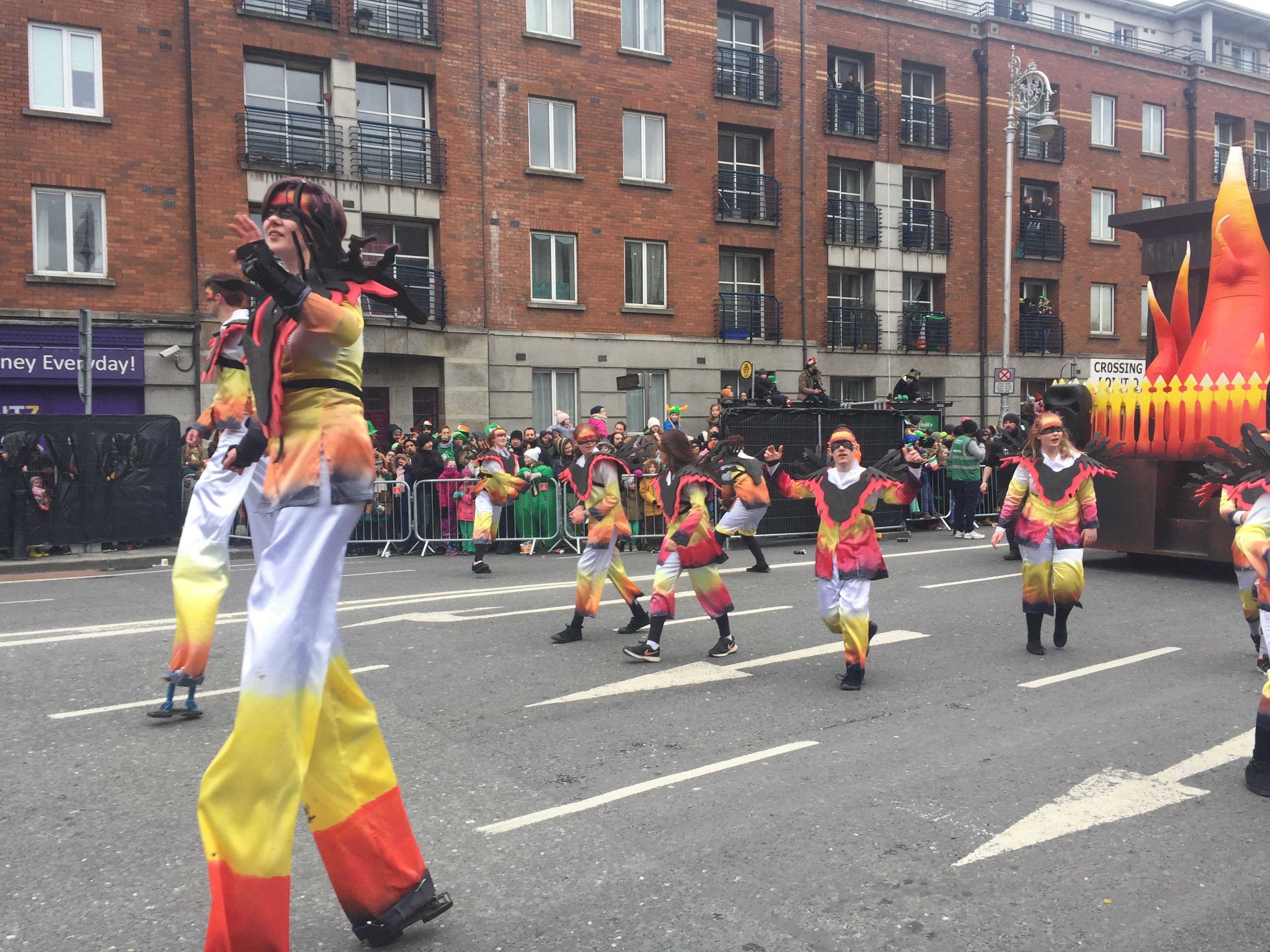 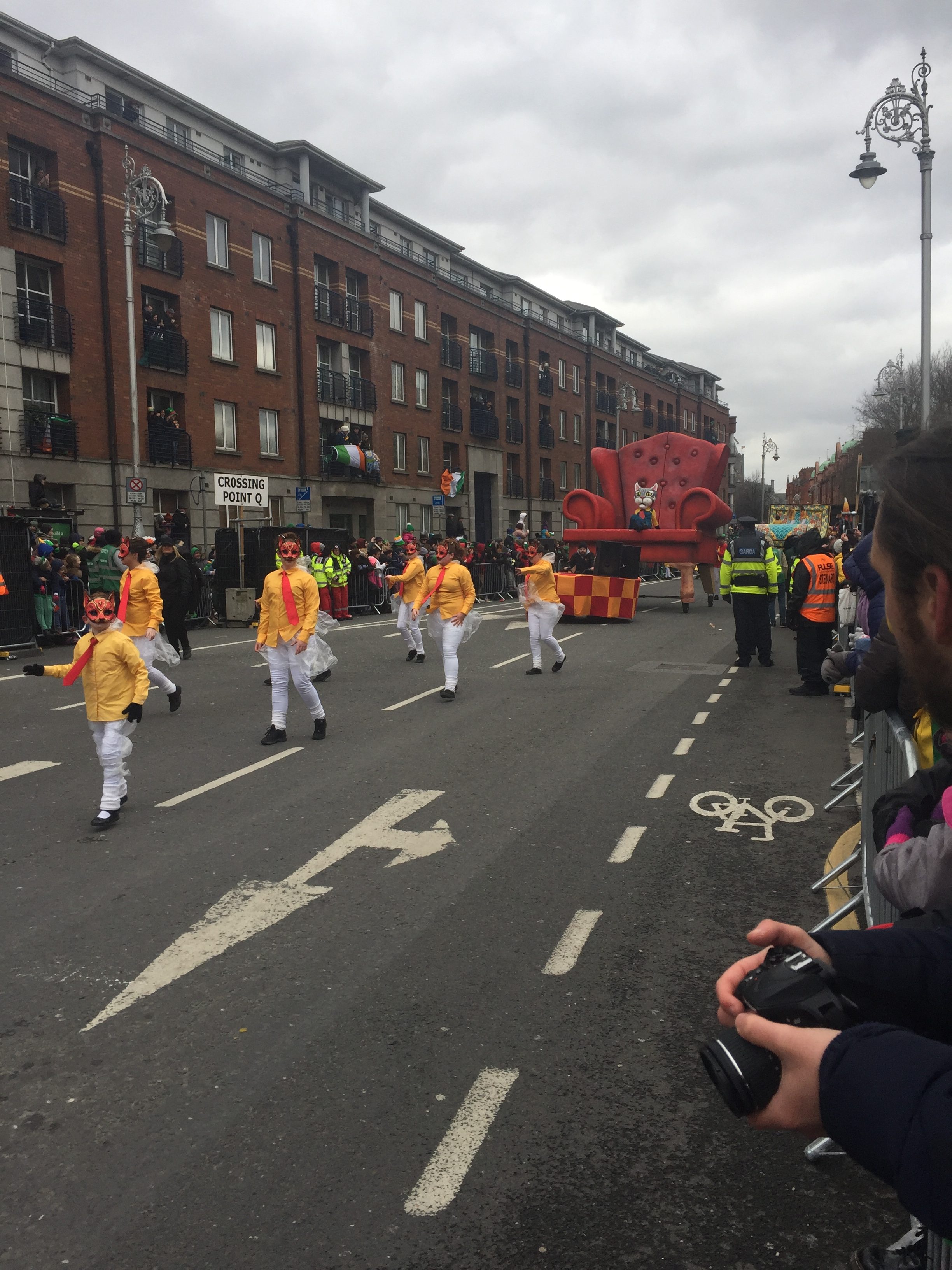 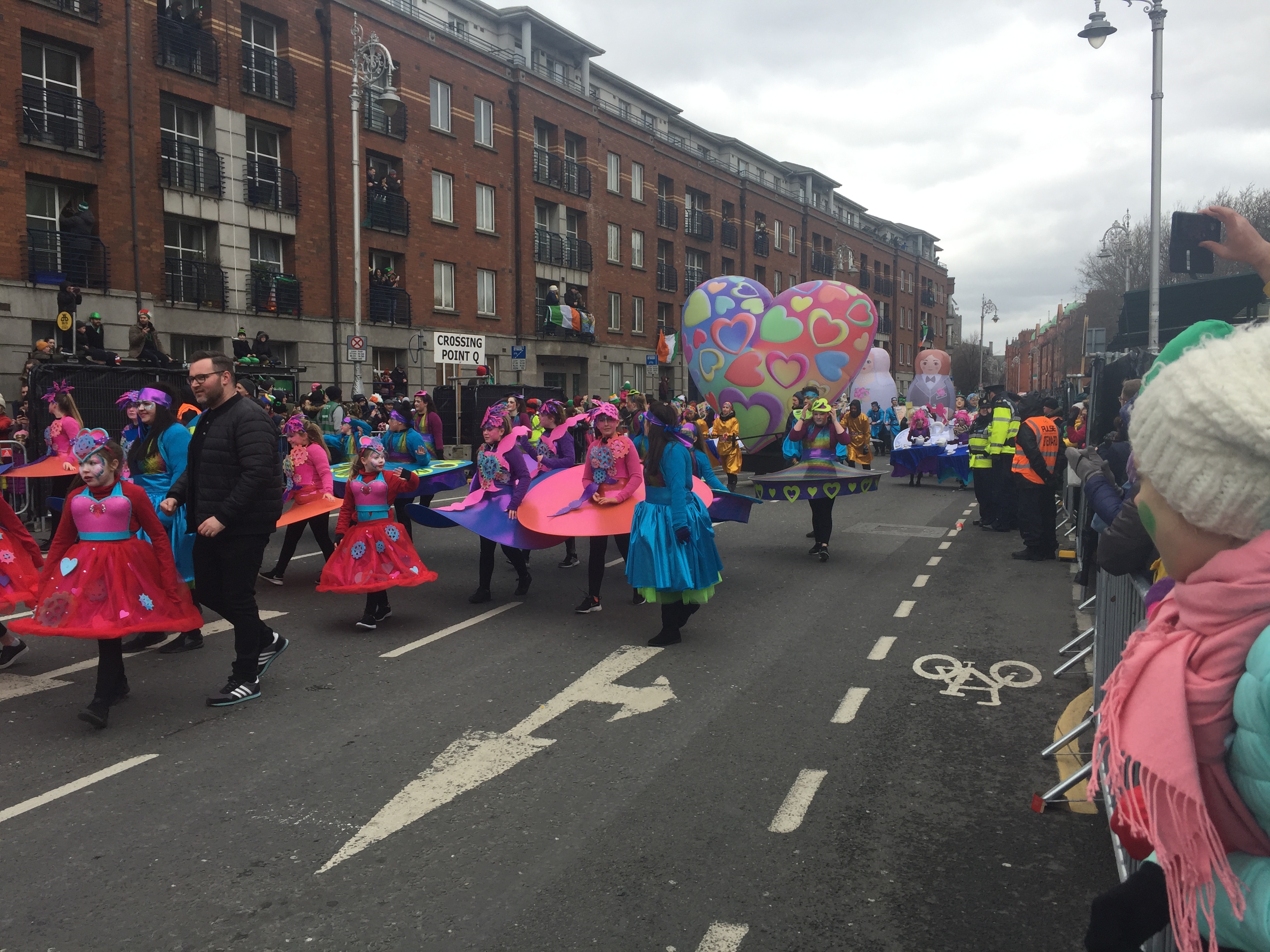 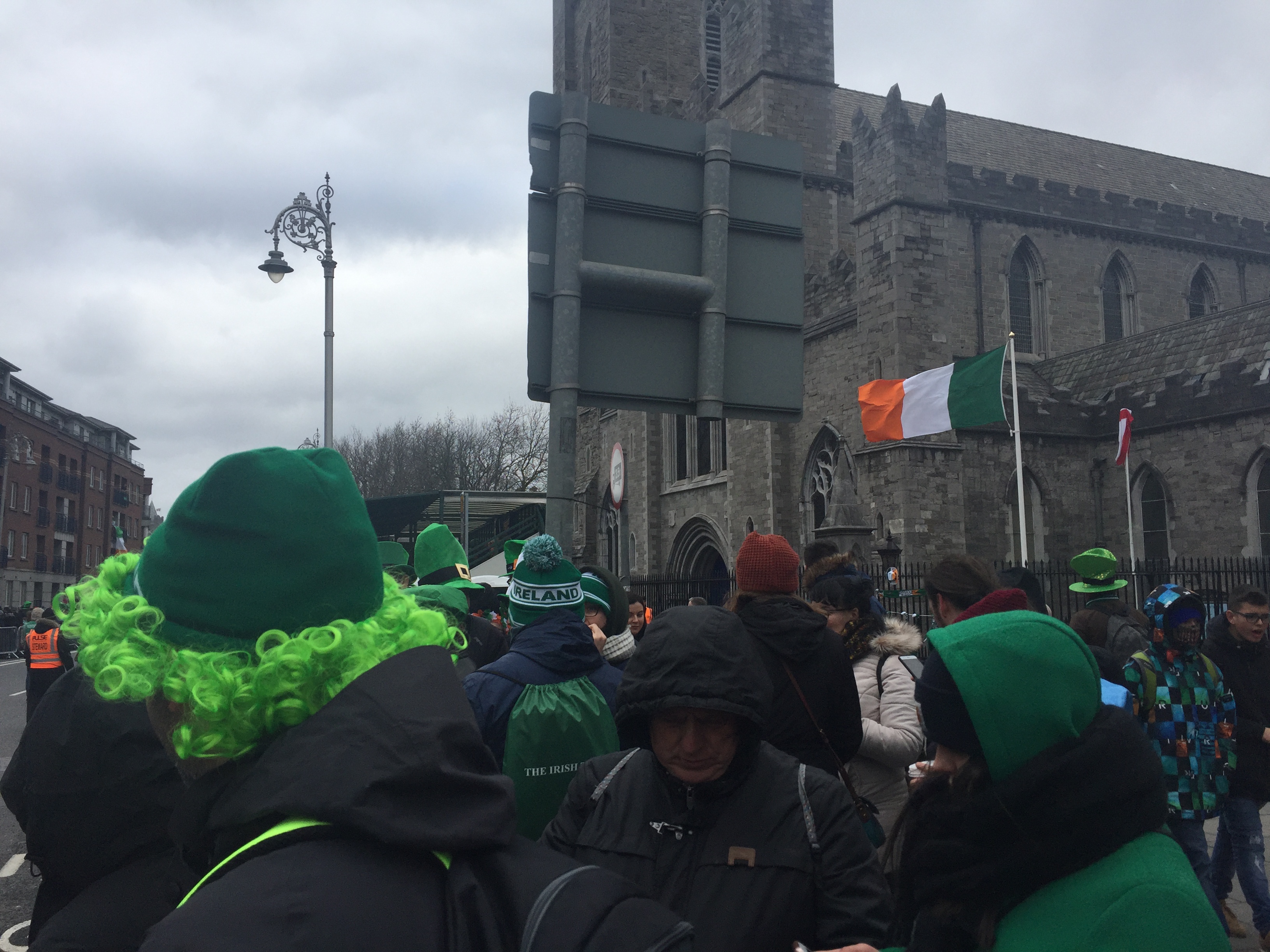 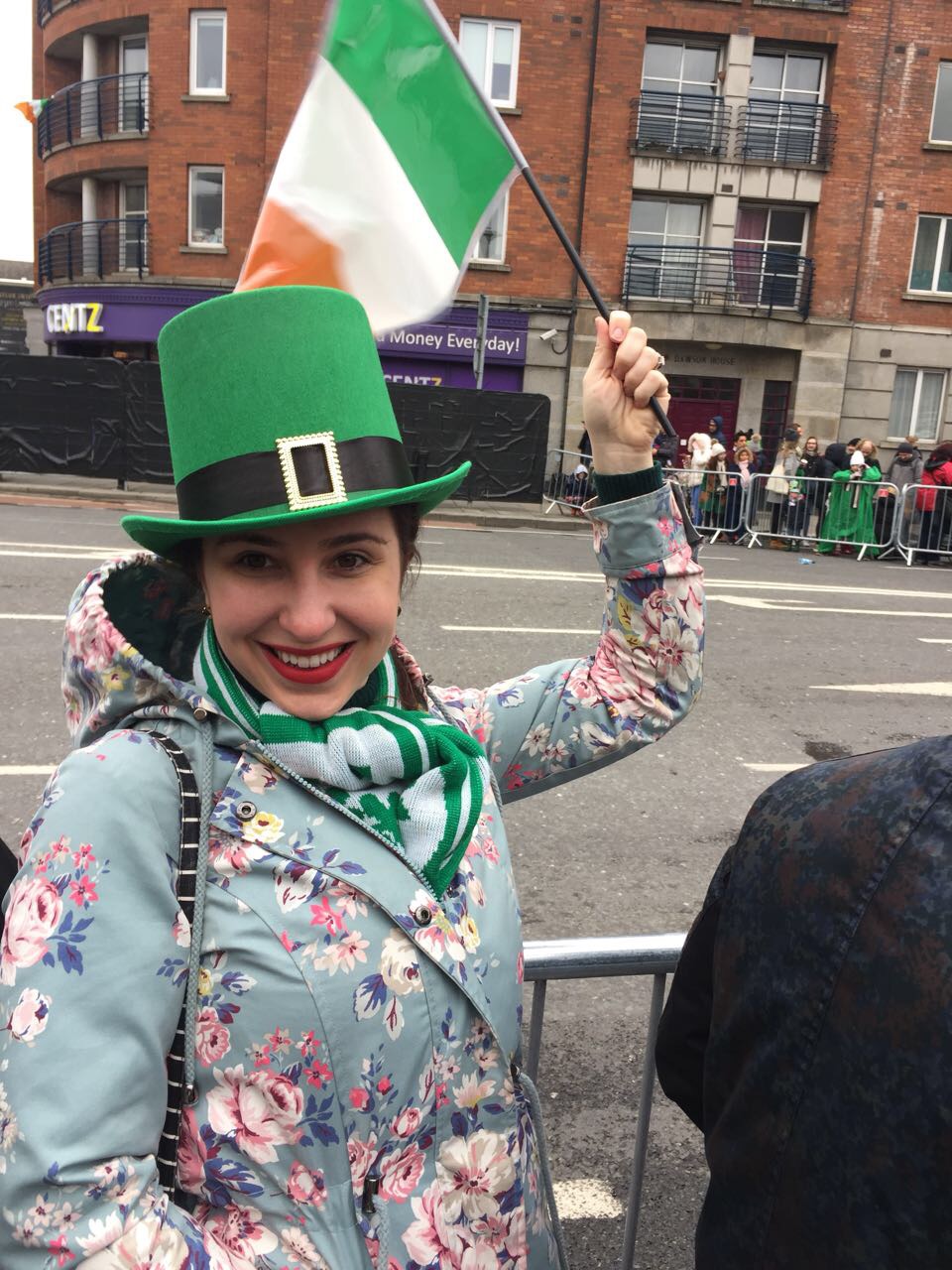 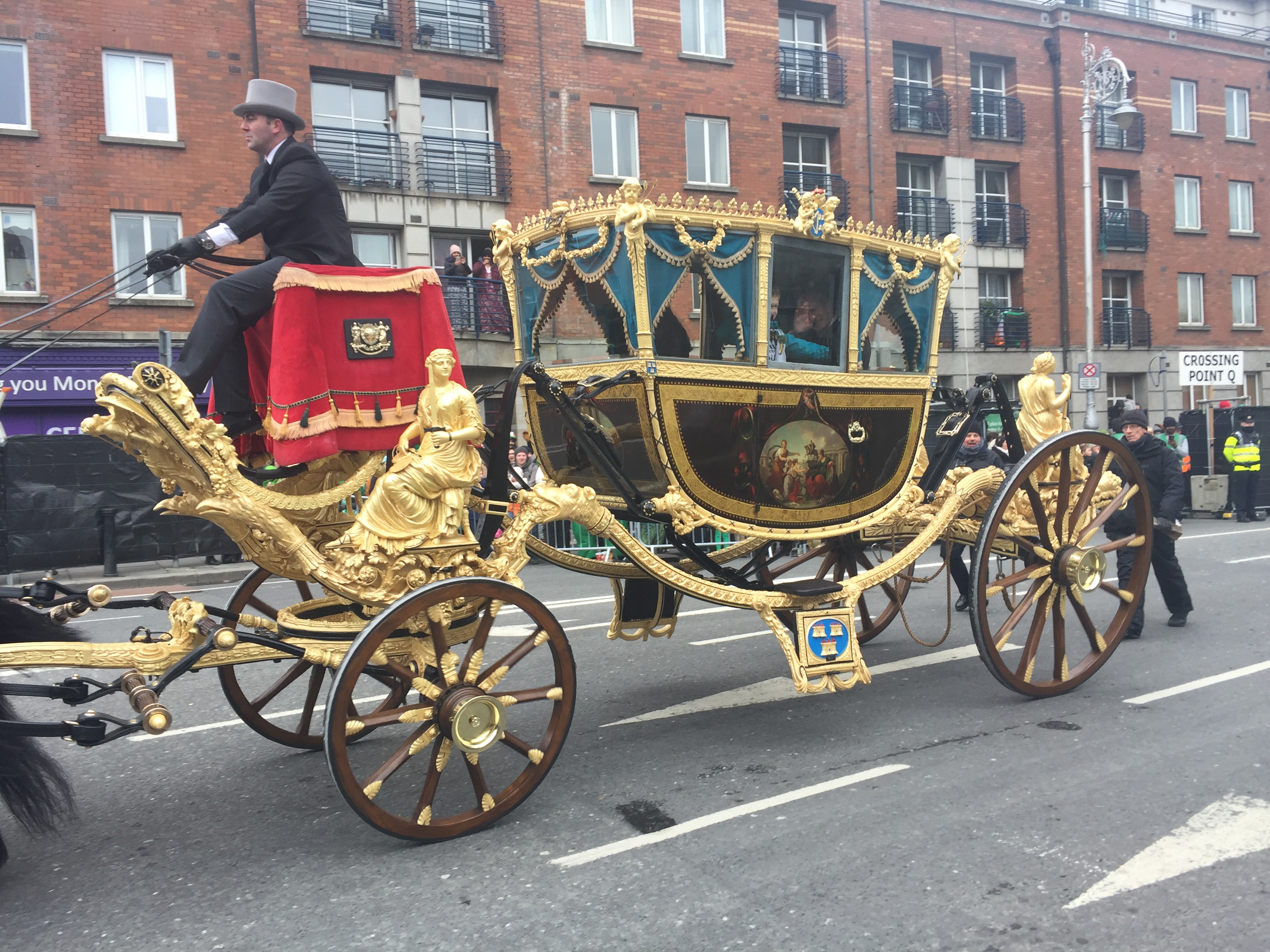 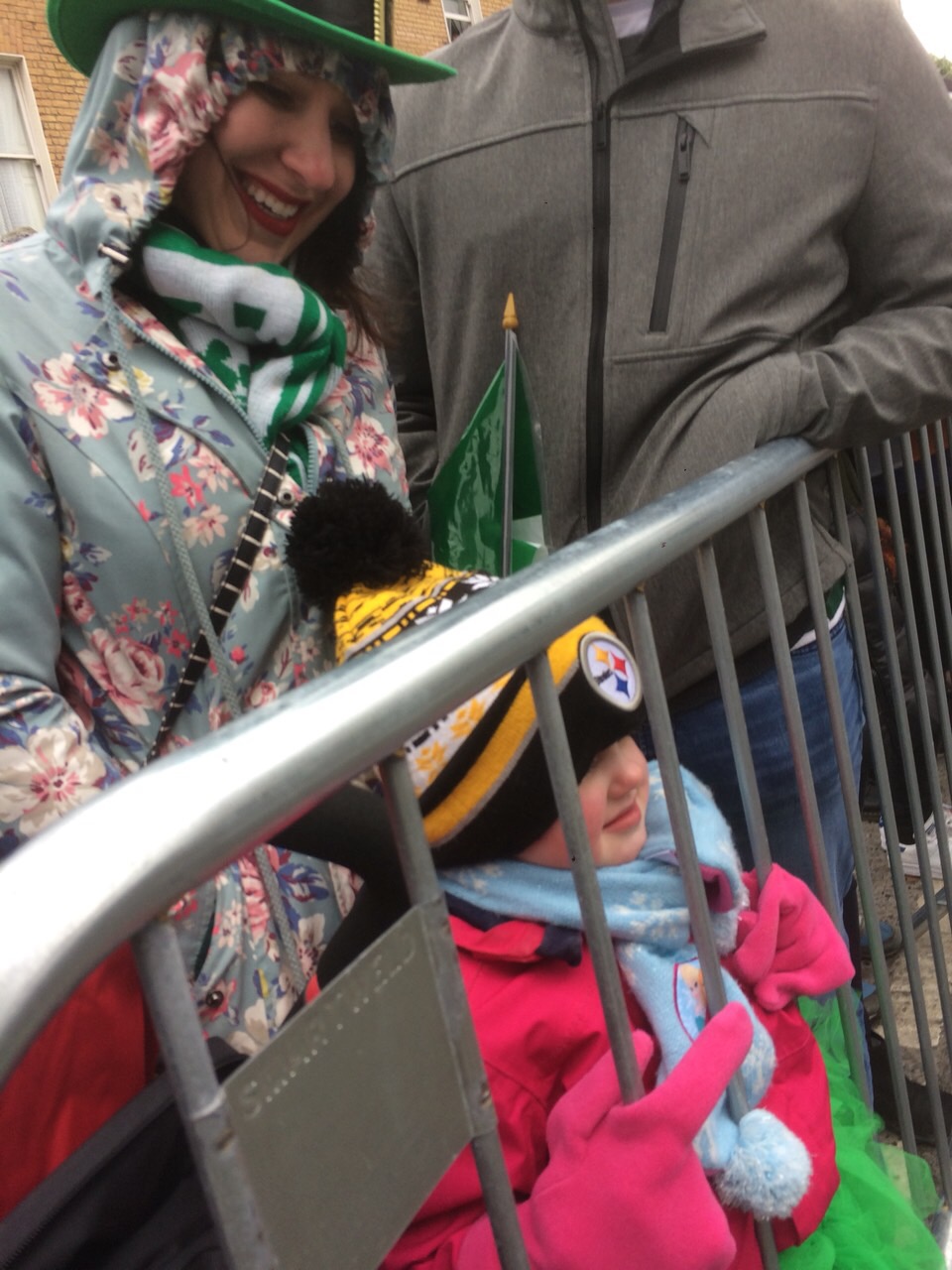 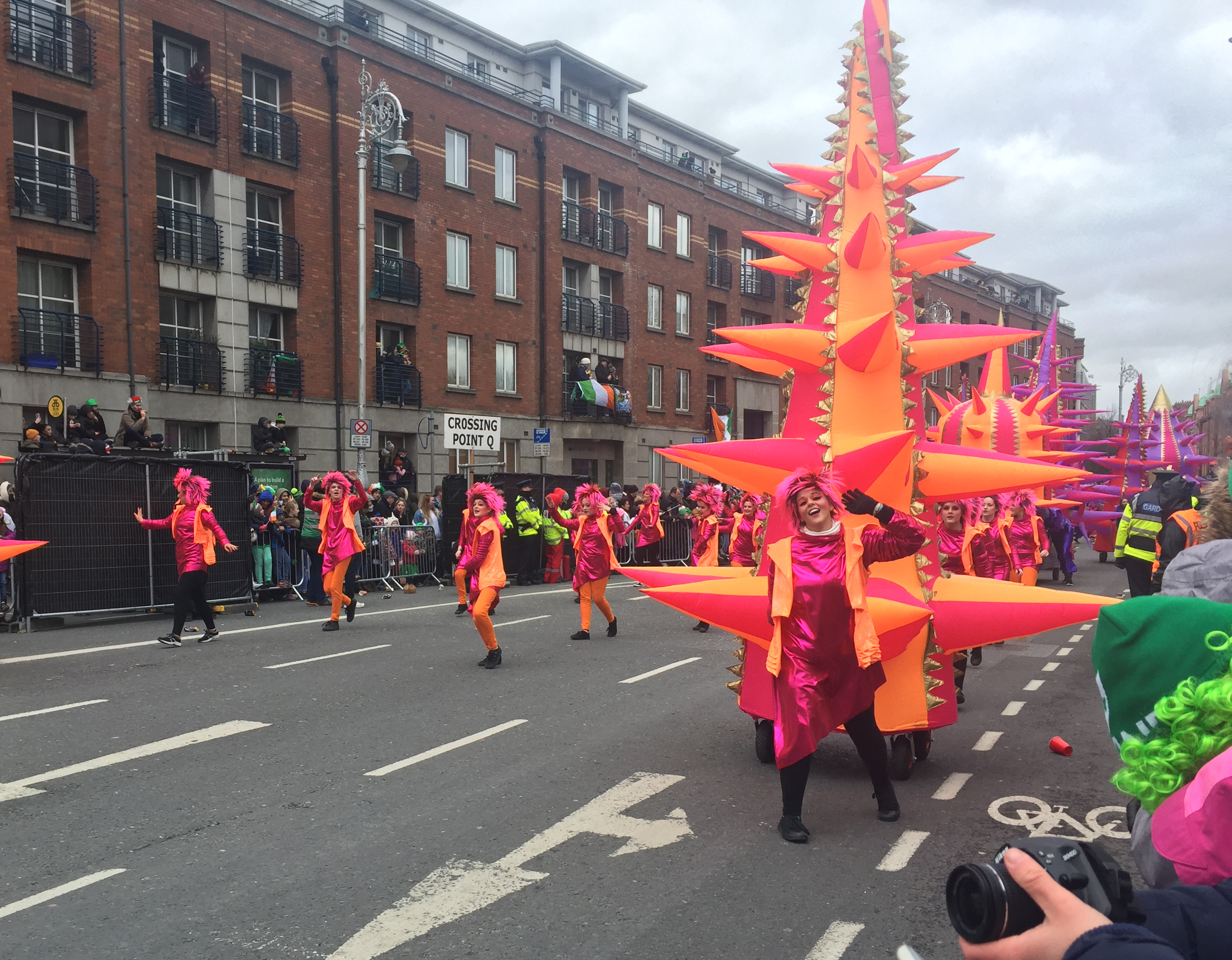 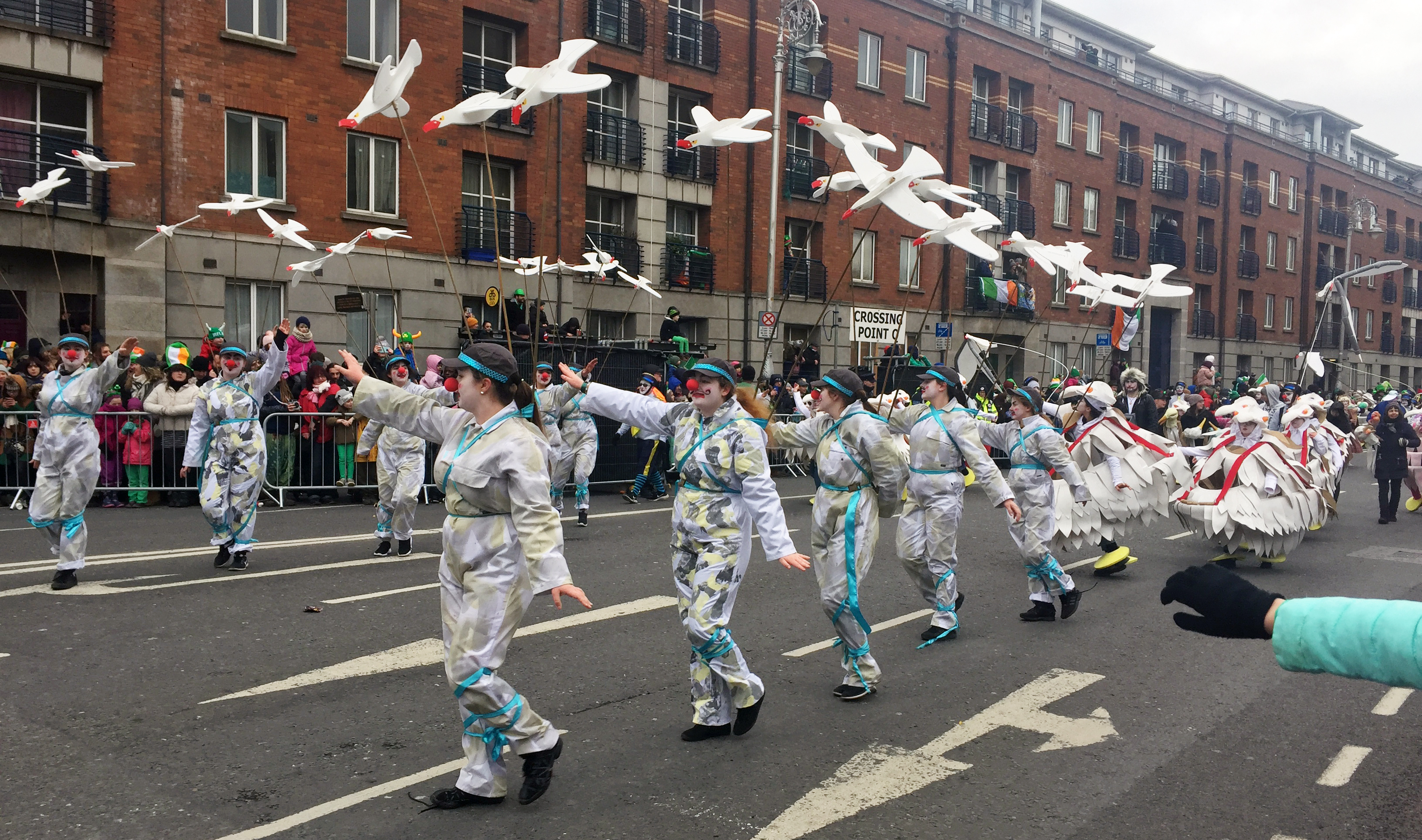 Now that’s not to say that his Paddy’s Days here in the States have been sad, lonesome events. With the exception of Paddy’s Day 2015 (which he will never forgive me for) when he had to halt his shenanigans for an hour to go to a florist to help pick out our wedding flowers, they have all been quite delightful.

Killian came the United States in 2008 to study at Mercyhurst University in Erie, and he never left. We met on the first day of freshman orientation, began dating shortly thereafter, and then we moved to Pittsburgh after graduation, where we have been living since 2012.

In those 10 years, our most memorable St. Patrick’s Day was probably during our senior year at Mercyhurst. The unseasonably gorgeous weather brought thousands of students out into the upperclassmen street, Lewis Avenue, for a perfect day of camaraderie and impromptu festivities. We had another amazing Paddy’s Day on vacation with my family in Treasure Island, Florida, where we put on our greenest beach clothes and walked down the boardwalk, listening to bagpipers (which aren’t Irish. I always have to point that out) and enjoying tropical cocktails. But most of our St. Paddy’s Days have been here in Pittsburgh, which, luckily, happens to be one of the best places in America to celebrate.

In addition to the city-wide festivities and events at local bars and businesses, Pittsburgh is also home to one of the largest parades in the country, celebrated for nearly 150 Paddy’s Days. The 2018 parade featured 22,000 participants in more than 200 marching groups, and it was dedicated to U.S. Ambassador to Ireland and Pittsburgh Steelers Chairman Dan Rooney, who passed away in 2017. From what I have heard, it was absolutely spectacular, as usual.

Headlining this year’s Pittsburgh parade was also the World’s Largest Potato, which is actually a six-ton potato sculpture pulled by a semi-truck called The Big Idaho Potato Truck. When I told my Irish sister-in-law, Eimear, about this particular gimmick, she commented, “Huh. Don’t you think that’s a bit racist?” Sure, it probably is. But the World’s Largest Potato could also be the world’s greatest metaphor for how we celebrate St. Paddy’s Day, and how we represent Irishness, here in the States.

Now that I have experienced a St. Patrick’s Day in Ireland, I can confidently say that the main difference between how we celebrate is tone. America’s celebrations are a bit outrageous and over the top, but other than the odd St. Patrick impersonator marching in a city’s parade, there are very few ties to the actual meaning of the original holiday. Whereas in Ireland, the day is more dignified and family-oriented as the entire nation turns out to celebrate its patron saint.

What else can you expect if you find yourself celebrating Paddy’s Day on the Emerald Isle? Here’s a short list:

I cannot definitively say that there is no green beer anywhere in Ireland on St. Patrick’s Day, but I can say that I certainly did not see any. You might find some in Temple Bar or other in touristy areas if you went looking for it, but I would be astounded to see any actual Irish people drinking it. It’s also worth noting that I did not once see a sign advertising Kegs ‘n’ Eggs, and in all my trips to Ireland, I have never seen corned beef and cabbage on a menu.

If you want to be a little more authentic next year, rather than starting your day with Kegs ‘n’ Eggs, check your local Irish pub to see if they have a full Irish breakfast: sausage, rashers, black and white pudding, fried tomatoes, eggs and toast. I don’t even want to think about the fat and sodium content in that meal, but it is a great way to kick off a day of festivities. Here in Pittsburgh, you can find one at The Claddagh on the South Side.

2. It is a religious holiday.

A bit on the man himself, St. Patrick: He is the fifth-century missionary credited with bringing Christianity to Ireland. According to legend, he did this by using a shamrock to explain the holy trinity to the native pagan Celts, and he also supposedly banished all the snakes from Ireland (yes, Ireland still has no snakes to this day). Not a lot is actually known about his life, other than that he was from somewhere in England, was brought to Ireland by Irish pirates and was sold into slavery. He escaped back to England after six years as a slave, became a bishop and, after having a vision, decided to return to Ireland to do missionary work. There he built churches, conducted innumerable baptisms, ordained priests and converted Celts by the thousands. It is believed that he died on March 17, 460, and though no formal canonization process existed at the time, the Irish quickly recognized him as a saint, and he is now celebrated as the patron saint of Ireland.

In the Catholic Diocese of Ireland, St. Patrick’s feast day is actually a holy day of obligation, but other Irish Christians may also go to church to on St. Patrick’s Day. For the Irish faithful, St. Patrick’s Day is a religious holiday as well as a cultural celebration.

In Ireland, St. Patrick’s Day is always celebrated on March 17 (unlike here, where our parades are sometimes scheduled for the closest Saturday), and it is always a public holiday. Schools and most businesses are closed, and if March 17 falls on a weekend, like it did this year, it is observed on the following Monday.

At last year’s Pittsburgh Penguins victory parade, I remember seeing some construction workers who were watching from above in a cherry picker and thinking, “Wow. They really got a great spot for themselves.” In Ireland, people are determined to find that great spot, even if it means lugging ladders and step stools to the parade to ensure a good sight-line. Many who didn’t bring step stools would climb onto absolutely anything with the space for proper footing. But my favorites were the people directly across from us who tore tiny circles into the plastic barrier to stick their faces through for close-up viewing. Some of us are in 2018; others are in 2268. 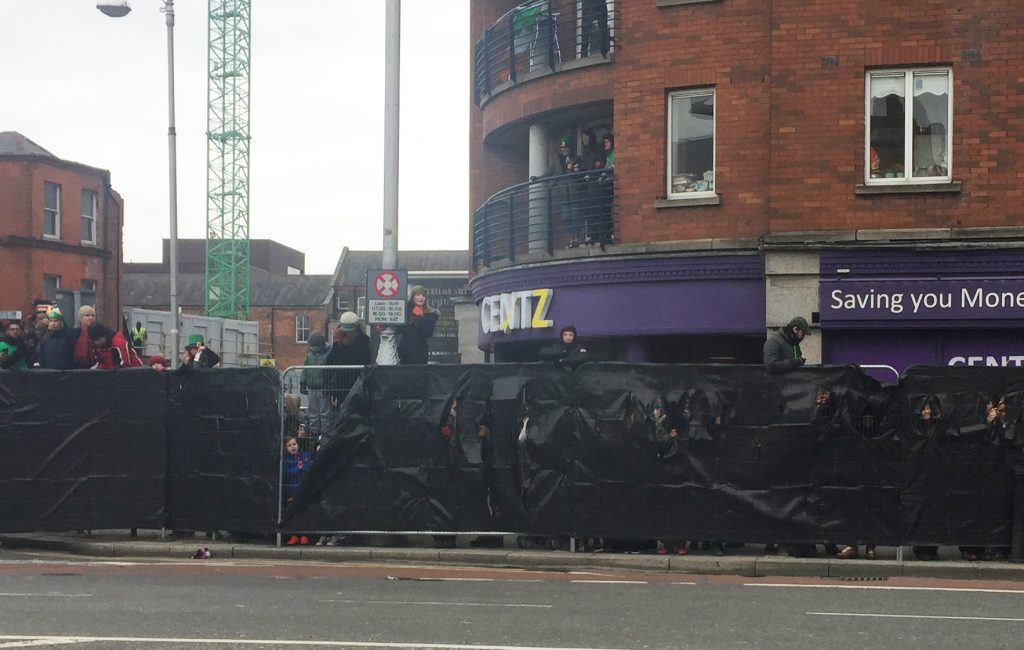 Specifically college-age American women. I could not tell you why, it’s simply what I observed. Don’t get me wrong—the city and the airport were full of people visiting from all over the world—there just seemed to be a significantly higher representation of American millennials. In fact, in the more touristy areas of the city, it seemed like the Americans outnumbered even the Irish.

6. Most of the musical groups in the Dublin parade are American marching bands.

Irish comedians Foil Arms and Hog have a sketch about the parade  where they imitate Irish people’s reactions, “Oh look, here comes the Florida marching band. Ah Jaysus, them girls look frozen … they’re throwing some sticks in the air and wishing they were back home.” What makes this so funny is that it’s completely true. As the California band went by, I heard, “Look at that tall one freezing! Poor thing didn’t even know to wear hosiery!” Then for the Ohio band, “Now they are sensible. Should have told the others about raincoats.”

7. Drinking starts later in the day.

I should preface this by saying that I personally did not even attempt to enter a bar until after the parade, but even so, walking around Dublin on St. Paddy’s Day morning, I did not even once encounter someone who was visibly inebriated. Perhaps this year was different because people may have been waiting until the start of the Six Nations Rugby Match at 2 p.m. (Ireland vs. England, with Ireland winning the Grand Slam and the Triple Crown!!!), but I suspect this is the norm for St. Patrick’s Day in Ireland. 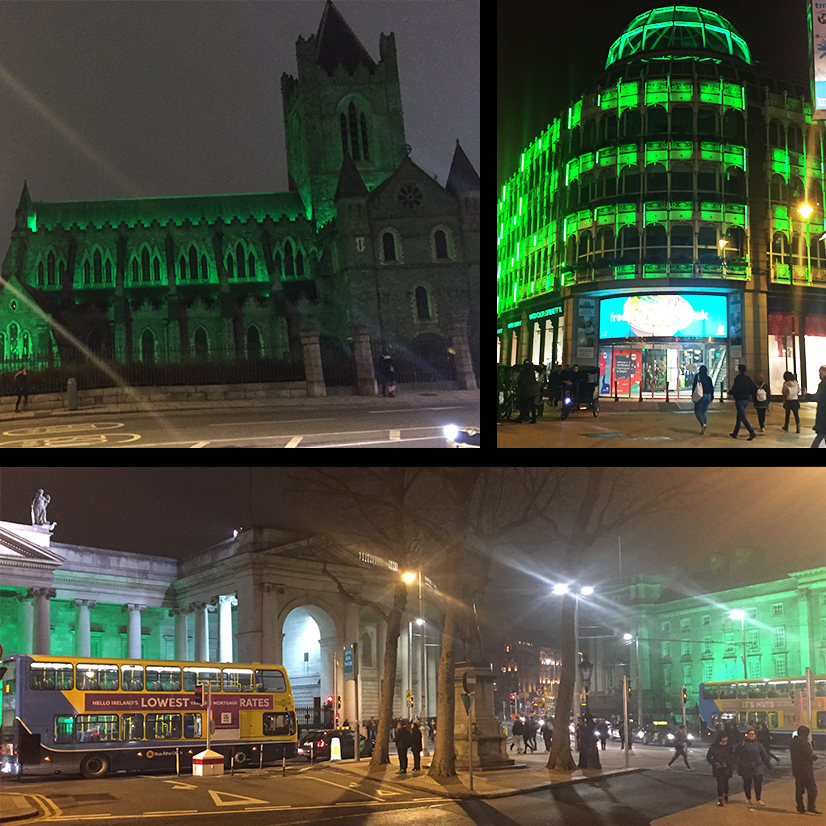 The Dublin parade was only one small aspect of the overall celebration. When we arrived, the airport was decorated with banners and tricolor balloon displays to welcome visitors for the holiday. The 2018 St. Patrick’s Festival in Dublin also featured five days of citywide entertainment and programming, including public movie screenings, exhibits, theater performances, seminars, tours, history talks, a pop-up Gaeltacht (Irish-speaking area), a 5K and more. It’s impossible to be in Dublin and not get swept up in the merry mood of St. Paddy’s week. In fact, green spotlights were set up in front of many of the public buildings, pubs and businesses at night, giving the entire city a festive green glow.

Sure, Chicago may dye an entire river green. New York City may have the largest St. Paddy’s Day turnout. And Pittsburgh may have one of the largest parades (and the world’s largest potato, don’t forget!). But if you really want to immerse yourself in Irish culture, there is no St. Patrick’s Day celebration in the world like the one in Dublin.