Pittsburghers know Pittsburgh played a role in the evolution of rock ‘n’ roll… unforgettable performers from the 1950s to the present ranging from the Marcels, the Vogues, Lou Christie and Donnie Iris to Rusted Root, The Houserockers, Bret Michaels and Christina Aguilera… groundbreaking deejays like Clark Race, Terry Lee, Rod Roddy and Porky Chedwick who played music parents didn’t want their kids to hear… and concert promoters like, well, like DiCesare Engler.

Though that company no longer exists, it remains the name associated with the Pittsburgh concert scene for more than 30 years. On Thursday, January 21, Rich Engler, who founded the company with Pat DiCesare in 1974, will be the first inductee into the Pittsburgh Rock and Roll Hall of Fame, which will be housed at the Hard Rock Café. Titled “Rock ‘n Rolling Over Cancer,” the event commemorates the 25th anniversary of Pittsburgh’s Cancer Caring Center and will become a long-term fundraiser by paying homage to a different local rock icon each year, says Rebecca Whitlinger, the center’s executive director.

Presenting the inaugural award to Engler will be Joel Peresman, Lebo class of 1974 and CEO of the Rock and Roll Hall of Fame in Cleveland. Peresman, who works out of New York, attributes Pittsburgh’s “huge” place in Rock ‘n Roll’s early history to our location. “We’re a crossroads, close to Wheeling, so we could pick up those country stations, and to Detroit with the Motown sound.” He says. “We could listen to Willie Nelson, then Bob Marley, then ZZ Top. We had good radio, good record stores. Pittsburgh could be a key stop on any kind of tour.”

Describing himself as having “zero musical aptitude,” Peresman says he was just a kid who loved listening to music, going to concerts, buying records and discovering new bands. He yearned to turn his passion for music into his life’s work, and was lucky enough to land a job with Engler while still in college by volunteering to “do anything.”

That same moxie led him to a post-college job in the fabled mailroom of The William Morris Agency, where he worked his way up to an assistant agent. In 1981 he and two senior William Morris agents formed International Talent Group, which over the years represented some of the biggest touring acts in the world—Pink Floyd, Depeche Mode, Duran Duran, Shawn Colvin, Peter Gabriel, Genesis, Tom Waits, The Cure and many others.

Peresman says he is “touched and very honored” to be able to induct his onetime mentor into the local hall of fame. He describes DiCesare Engler’s contributions: “To create this [Pittsburgh] music scene and to be able to have all these artists here, you had to have somebody who was up on music, knew the scene and was willing to take the risk and put their money up. And Rich and Pat did it.” 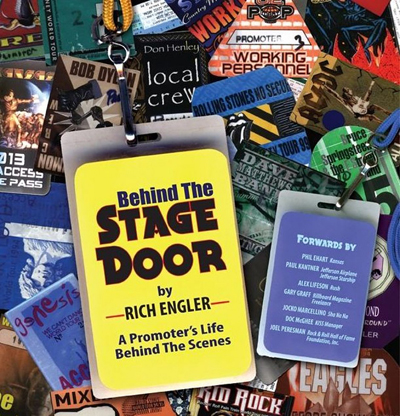 As Engler’s new book, Behind the Stage Door, reveals, Engler not only “did it” but in the process got to know just about every rock star or group you can think of, including The Doors, Janis Joplin, the Rolling Stones, The Beatles, Pink Floyd, Aerosmith, Guns N’ Roses, the Grateful Dead and Bruce Springsteen.

Peresman is pleased that rock ‘n’ roll, via Engler and the inductees who will follow him into the Pittsburgh Hall of Fame at the Hard Rock Café, can raise money for an agency that provides support for people with cancer and their families.  “It’s a great opportunity to do something good,” he says.

It’s not surprising that Rebecca Whitlinger—known far beyond Pittsburgh and the Cancer Caring Center for her verve and creativity (she’s the gal who’s worn her gold bridesmaid dress all over the world for the last two decades)—would come up with the idea for the event. Except she didn’t. Whitlinger says the idea came from Cancer Caring Center board member Mary Beth Beggy, who was profiled in this magazine last month as an inspirational example of someone living with cancer.

A team of people chaired by Mary Ann Miller and Theresa Kaufman have arranged all the details of the  “denim to leather to casual chic…. anything goes” evening, which will include cocktails, a Rock’n Roll menu, a silent auction with autographed items, special VIP appearances and musical guests and performances.