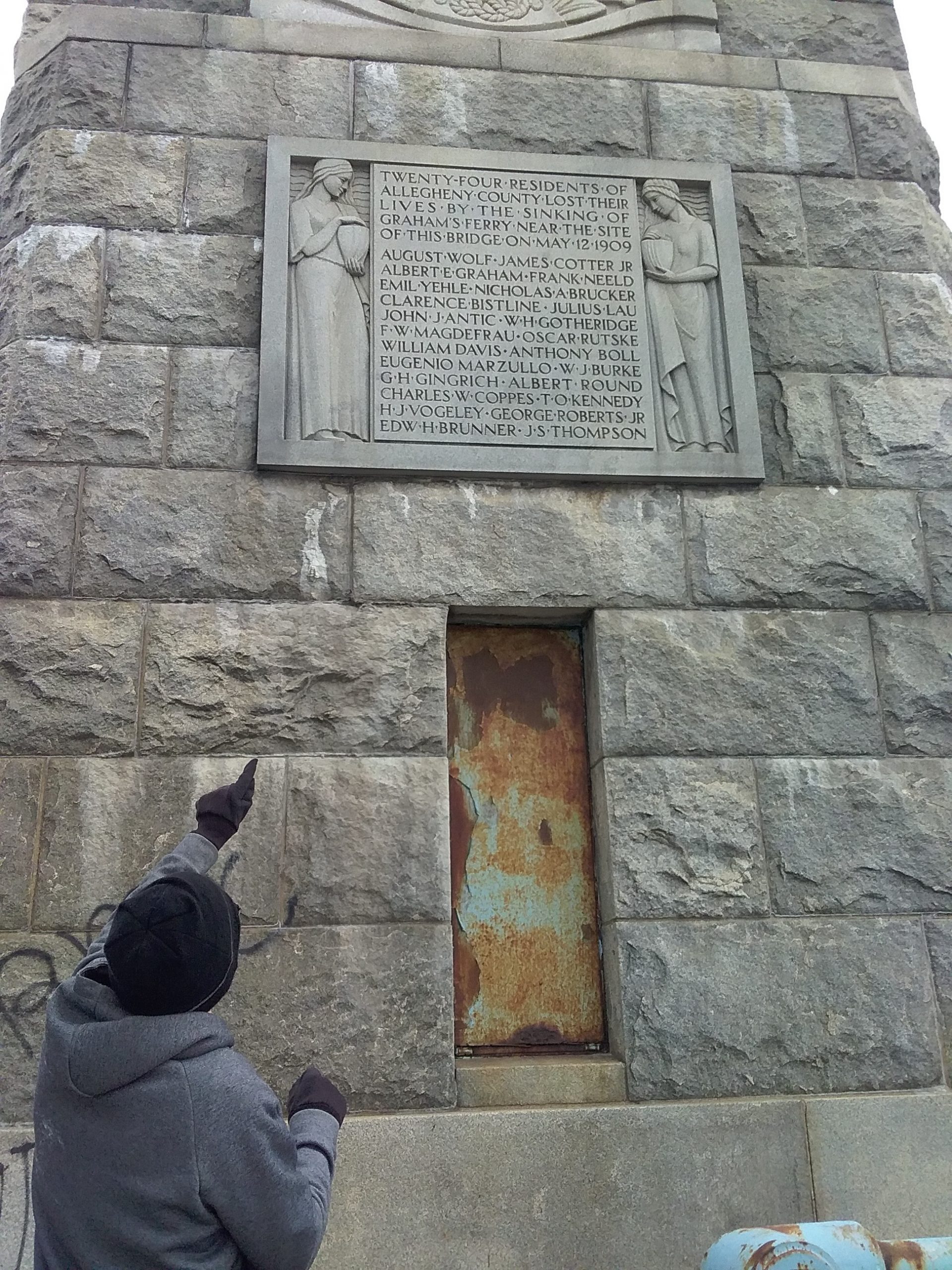 Last December, while strolling across the McKees Rocks Bridge, which I had never walked on before, I spied a marker etched in one of the concrete bridge columns commemorating “The Sinking of Graham’s Ferry” in 1909. I had never heard of this disaster on the Ohio River, although I pride myself on my knowledge of local history.

The day I traipsed across the bridge, the winter wind bit my cheeks and an ominous gray sky loomed overhead. I peered at the murky river below and wondered what watery secrets it contained. Then I vowed to uncover the tragic tale of Graham’s Ferry. After doing some research, I found a news item in the archives of the Pittsburgh Daily Post.

It happened 112 years ago around eight o’clock on a cool spring evening in May. On May 11, 1909, an overloaded, 24-foot-long gasoline ferry carrying about 33 passengers and operated by Albert Graham, sank halfway across the Ohio River while crossing from McKees Rocks to the North Side. It occurred near the current site of the McKees Rocks Bridge. The plaque listed the men who perished, including Frank “Boots” Neeld, Eugenio Marzullo and William Gotheridge, whose brother Harry survived.

The Daily Post quoted Harry: “I was pulled under the water and had just enough time to take a breath as we went down. Under the water, my brother let me go and I came up to the top and began to swim for shore when a skiff came up and pulled me on board. All this happened in about three minutes and I have not seen my brother or heard anything about him since.”

Edward Vogeley was also rescued by that skiff and he, too, lost a brother, Henry Vogeley. The skiff operator, John Deer, who lived in a houseboat on the McKees Rocks side of the river, was credited with saving six men. Only a few men were able to swim to shore because of the descending darkness and the heavy clothes they wore. By noon the next day, search parties recovered four bodies as grief-stricken families waited by the river for news, probably near the now-crumbling stones of the abandoned state correctional institution known as the Western Penitentiary.

Nineteen of the 24 men who drowned that day had worked overtime at the Pressed Steel Car Company. They were tired and rushed to clamber on the overcrowded ferry. The boat started taking in water immediately, but the ferryman was not worried. In a few minutes, the yawl was in distress.

During the search and rescue, a steamboat, “The Tornado,” used searchlights to aid the many boats covering the Ohio that had joined in the rescue efforts. Families of the drowned men lined the river all night to watch and pray. How surreal that must have been, similar in its eeriness to the survivors in lifeboats witnessing the Titanic sink into the ocean, toppled by an iceberg. 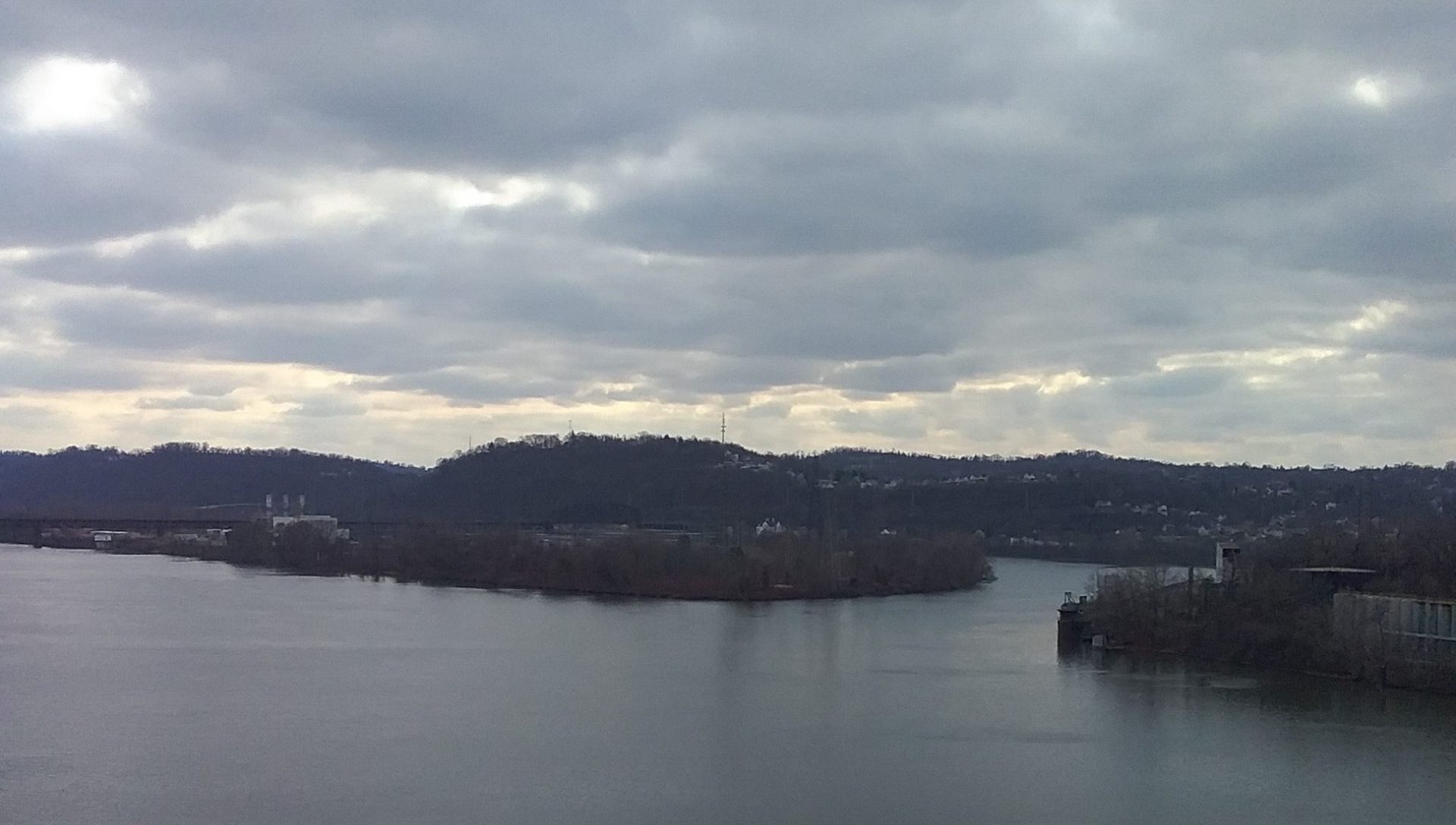 The comparison ends there. The sinking of a renowned ocean liner into the Atlantic, which killed about 1,500 out of 2,200 on board, garnered far more publicity than a submerged ferry boat in the Ohio River that drowned 24.

Unfortunately, fate was not finished with laborers at Pressed Steel Car works, which averaged one death per day due to dangerous working conditions. Two months after the ferry disaster, a strike broke out at that company that lasted from July 13 through September 8, culminating in a “Bloody Sunday” confrontation on August 22, 1909, which pitted strikers against private security agents and police. The clash resulted in at least a dozen recorded deaths and possibly more.

The next time I’m on the Gateway Clipper sailing down the Ohio River, besides gaping at the tanks and pipes of the Alcosan wastewater treatment plan, I will remember the tragedies which befell the working men in McKees Rocks more than a century ago. I will recall the names of Albert Graham, the ferryman who navigated the boat; John Deer, the skiff operator who saved six men; William Gotheridge, who let go of his brother Harry’s hand so Harry could save himself; and the men who died drowning and in the subsequent labor dispute, many of whom were immigrants.

I knew all about the Arsenal explosion of 1862 in Lawrenceville and the Johnstown Flood of 1889. And thanks to that serendipitous winter walk across the McKees Rocks Bridge a couple months ago, I now know about Pittsburgh’s Titanic, the Graham’s Ferry Sinking of 1909.