In January, we lost noted Pittsburgh luminary John DeSantis, the creator and executive director of Pittsburgh’s Home & Garden Show. The largest home show in the commonwealth, Pittsburgh’s Home & Garden Show became David L. Lawrence Convention Center’s first tenant in 1982 and often drew 350,000 visitors over its annual 10-day run. John was also known for his work in revitalizing the North Side, and in particular, the then-deteriorating Allegheny West section of the city.

I first heard the term “completist” when viewing a rerun of American Pickers. In this episode, the stars of the show, Mike and Frank, interacted with a collector who displayed a metal lunch box collection of every known issue lunch box. Then the collector indicated he was only interested in selling duplicate lunch boxes. Mike’s hopes to buy a childhood lunch box were dashed, since the collector had no duplicate in his collection. Mike said, “you must be a completist.” I learned a completist is a person who attempts to collect an example of every item in a particular field. John DeSantis was, among his notable accomplishments, a completist, with a standard gauge train collection that can only be called “amazing.” John collected one of everything, and every variation, from every standard gauge manufacturer. On my first visit to John’s beautiful home on Brighton Road in the North Side in 2015, I came to appreciate the enormity of the collection.

John and his family lived in a four-story Victorian mansion in the heart of the CCAC campus. I was amazed to see the 18,000 square foot, 31-room Victorian townhouse, which John later indicated was a 10-year restoration project. The ever-gracious and welcoming host, John, welcomed visitors to explore the magnificent downstairs restoration. But it was after climbing the six-foot-wide curved staircase to the third and fourth floor that the real magic began. 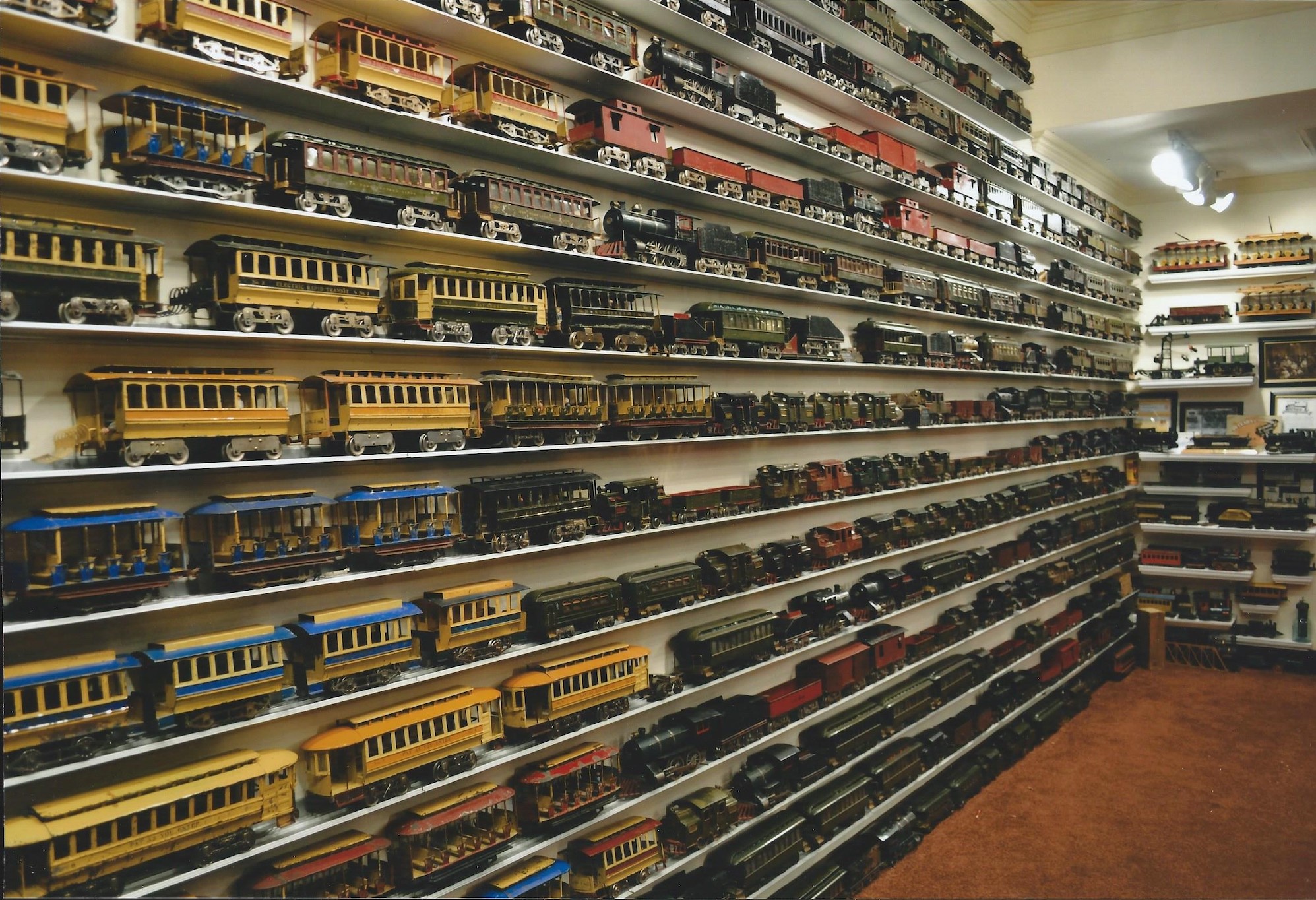 The third floor contained four large rooms for each company that made standard gauge sets. There was one room for Lionel, one for American Flyer, another for Ives, and a fourth room for a combination of various manufacturers other than the “big three.” The Lionel collection left the visitor marveling at 1100 separate trains on display in a room with a 14-foot-high ceiling. The extremely large room was especially impressive, since all the walls contained rows of 14 to 15 tracked shelves, holding over 20 trains each. The Lionel room was also unique, since John designed to incorporate three double-sided interior walls, allowing for the visitor to actually see ten walls in one room. His Lionel collection included the earliest summer trolleys, as well as the first prototype train engines. John’s 60 early trolley sets were made in the early 1900’s and stopped appearing in Lionel catalogs after 1912. 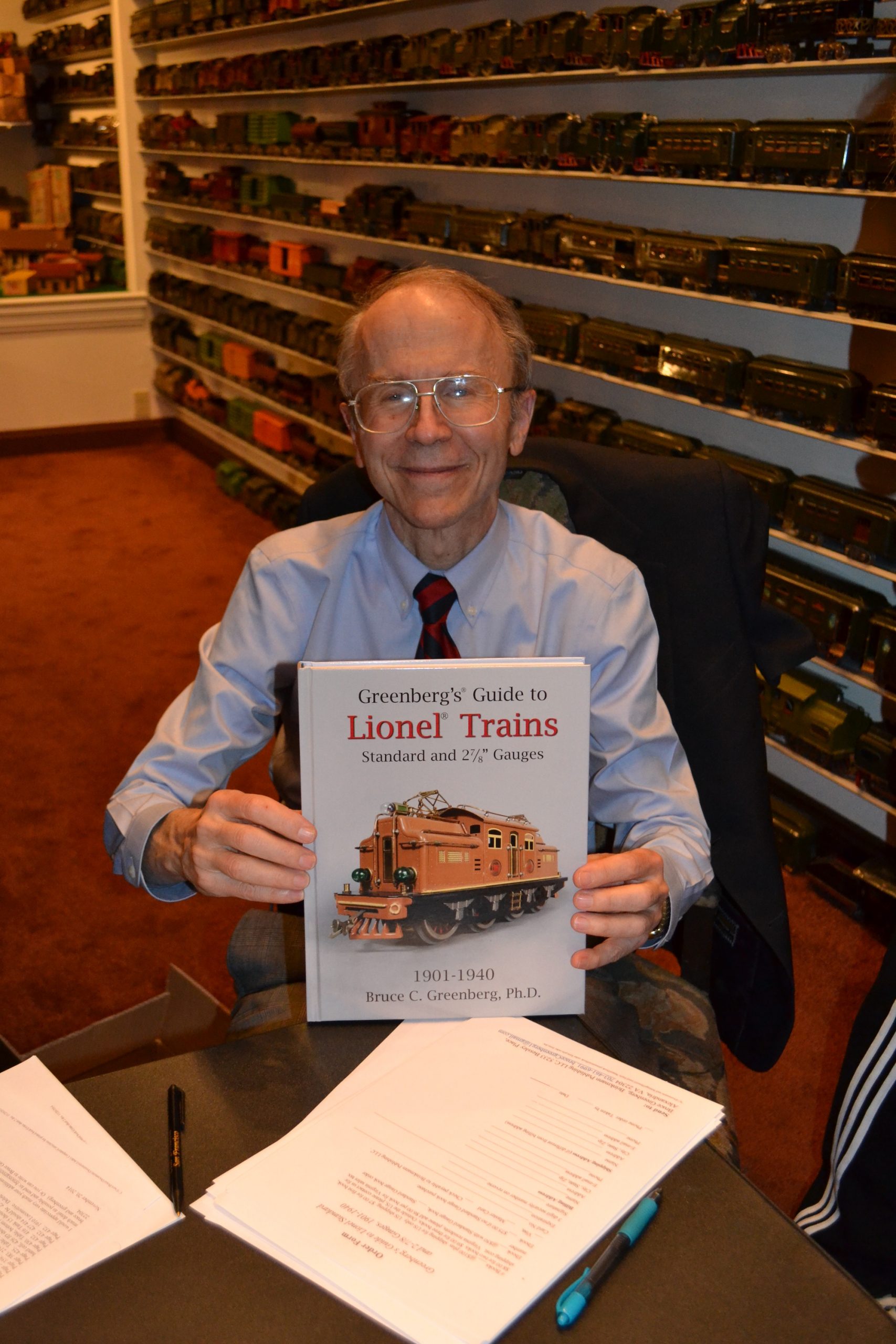 In a subsequent visit to the collection a year later, I met Bruce Greenberg, author of the definitive Greenberg’s Guide to Lionel Trains, who was showing his book to the assembled train collectors. John told me that Bruce spent an extended period of time at his home in order to photograph and write the Lionel Guide. This attests to John’s status as a completist in the train collecting world.

We then moved to the Ives room. Ives was third largest maker of the big three. John managed to assemble a white set, considered the gem of the Ives Company. Again, John’s walled track systems made it easy to view all the various Ives models, along with all the variations of the Southern Pacific train sets. I then moved on to the American Flyer room, with its equally-impressive 13 variations of the President’s special set. A variety of locomotives, six-window passenger cars and the original prototype of a rare engine along with an operating baggage car completed the room.

The final room on the third floor was, as John named it, the “Everyone Else” room. This room contained examples of other pre-war toy train companies, including Dorfan, General Trains, Bing, Boucher and Marklin. Each time I visited John’s collection, new fascinating facts came to the surface. The Dorfan trains were unique, with little passengers in each window. The company was founded in 1924 by Milton and Julius Forchheimer, whose family made Fandor trains in Germany. They immigrated to the United States to continue the family’s business due to extremely high import tariffs after WWI, and the name was changed to Dorfan. 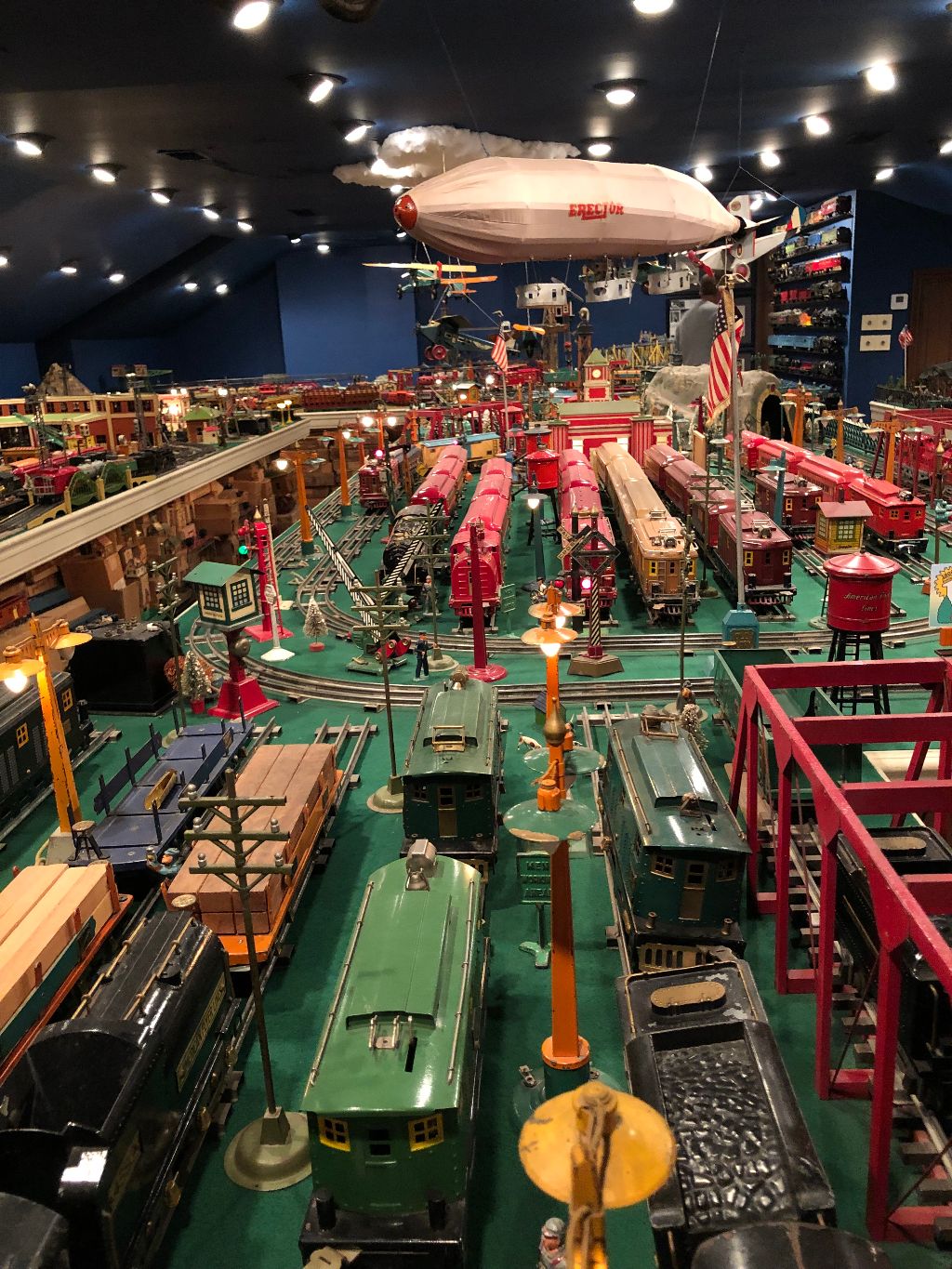 As soon as you assumed you had seen everything, John escorted you to the fourth floor to see all the train layouts attributed to each company. Each of the major makers had its own layout with each operational train. Especially impressive were the thousands of accessories used and sold by each maker. Under each of the platforms, visitors and diehard collectors could easily view all the original boxes for each major train manufacturer. The fourth floor was one large open room that simply overwhelmed the visitor with a myriad of trains, accessories and displays, including everything from a complete circus setup to bridges and elevated tracks. Even airplanes and an Erector Set Dirigible hung from the ceiling. All the layouts were “pure” in that every component, including transformers, rheostats, track, switches, trains and accessories were from the correct era and the same manufacturer.

Many of the train collectors told me that John’s collection included many examples that they had never seen before. For these collectors, John DeSantis’ passion for his trains, and his willingness and generosity in sharing this tremendous collection will be sorely missed.