NEW DEVELOPMENT A developer who plans to build condominiums at Mt. Lebanon’s northern gateway on Washington Road was back in front of the planning board to ask for preliminary approval of a new idea for the site.

Zamagias Properties owns several parcels at the corner of Washington and Bower Hill roads, and is planning a development tentatively titled Mt. Lebanon Condominiums. The 46-unit project would be built in phases and include 18 on-street parking spaces that the public could use, in addition to 92 spaces for residents in an underground parking garage. Mt. Lebanon officials would be free to decide if the municipality wanted to install meters at those on-street spaces.

The return of the parking spaces is important because part of the property to be used for the development was purchased from the former Mt. Lebanon Parking Authority and used as a public parking lot. But since that lot was closed, there is less parking in the north end of town. Plans call for Washington Road to remain four lanes at that site; the parking would be indented rather than taking up space in the travel lane.

The blueprints reflect a traditional condominium style of at least three stories. Some units are to be built vertically, like a townhouse and others are located horizontally inside a larger multi-unit building. Some have open access to the outdoors and others require entrance to the building through a main door. A courtyard plaza would be landscaped in the middle of the project.

The project also includes an easement for a turning lane, allowing drivers heading toward Washington Road from Bower Hill Road the ability to get into a right-turn lane. Access to the property would be around the back on Kenmont Avenue.

Phase I of the project would call for 15 or 16 units to be built near the corner of Washington and Bower Hill.

The planning board in October gave Zamagias preliminary approval to consolidate the several parcels on the site into one. However, the board tabled its recommendation for preliminary approval of the land development plan while it waits for some clarification from the developer on some questions related to traffic, stormwater management and more detail on how the design of the buildings would conform to the municipality’s design guidelines required of new construction.

Zamagias was scheduled to appear before the planning board in late November. Stay tuned. 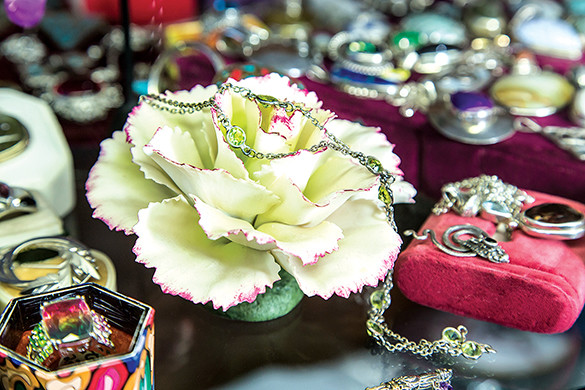 UPSCALE RETAIL Business owners Anthony Luppino, Daniel Luppino and Phong Bui relocated their shop, Luppino Brothers Antique Shop, which has been in business since 1987, to Washington Road from Pleasant Hills.

The Luppinos and Bui chose to relocate to 660 Washington Road because they see Mt. Lebanon as a bustling community. “It’s familiar to my brother and me because my aunt and my grandmother lived for 50 years on Vernon Drive, so we’d spend weekends at my cousins’ and go to the Denis Theatre, and all that. So it’s just a comfortable place for us,” says Anthony.

“We always drive by the area and we saw there was always a lot of activity. Everybody seemed to be friendly,” says Bui.

They sell a wide range of antiques, including estate jewelry and fine art, priced anywhere from $10 to thousands of dollars. “We want to adapt to all levels of the crowd from young to old,” Anthony says.

Tarnopolsky’s studio teaches traditional Shotokan karate, with many of its students coming from Mt. Lebanon. Besides offering karate classes mostly in the evenings, Tarnopolsky teaches an active stretch class for adults on Monday, Wednesday and Friday mornings at 7.

Tarnopolsky strives to teach her students responsibility. “Our kids have to earn their belts and stripes. You get what you put into it,” Tarnopolsky says.