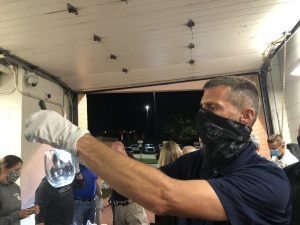 Spoiler alert: Solving a crime is not like TV! But I still love my crime scene TV—CSI, NCIS, Blue Bloods and The Rookie, to name a few.

As we listened to Cpl. Jeffrey Heidenreich and Detective Cpl. Sam Smolarek during our third week of Mt. Lebanon’s Citizens Police Academy, I quickly learned that there’s a lot more that goes into solving a crime than the one-hour snippet—and the not-always-completely-accurate scenarios—that we see on TV. However, it still was pretty cool getting to lift fingerprints off a box of coffee.

Mt. Lebanon’s Investigative Services Unit takes a lot of steps when solving a crime, including interviewing witnesses, caring for the victims, collecting evidence, conducting follow-up interviews and preparing a case for prosecution. It’s almost like putting together a puzzle, piece by piece. And sometimes, there are pieces from another puzzle thrown in the mix that you have to sort through. And other times, the pieces of the puzzle have some rough edges that you have to work through. 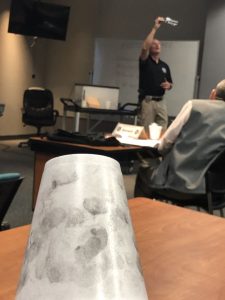 As a visual/hands-on learner, my favorite parts of this week’s academy were the interactive portions. First, they showed us a video from an apartment building burglary.

The video showed three men coming from one doorway and walking off camera. Then, you could hear some commotion in the background and the three men emerged with a fourth following after them. You could hear shots ringing out, as the initial three men fled out another doorway.

That’s what I recalled, as I jotted down some descriptions of their clothing so that I’d be sure to remember when asked.

“What did you see?” Heidenreich asked the class. “You’re all witnesses.”

As my peers began to chime in with what they saw, it was clear that, out of a class of 17, we still didn’t have all of the details. Some observed more than others. Some saw things differently.

That’s how it is in a real life scenario as well, they explained.

“Sometimes your perception will influence what you’ve seen,” Heidenreich said. “We have to take all of the information that we get and see how it fits into this big puzzle of what happened.” That includes the evidence collected, if there’s video of the event and witness statements. The quality of the video can even impact the investigation.

And they have to document everything. Documentation is key when the case moves through the court system.

We also watched a video to show us how, when we’re focusing on one thing, we don’t always pick up on something else happening right around us. So, if I’m sitting at a restaurant talking to my friends and enjoying my food, I might not fully take in what happened across the street, even though it’s in my view. 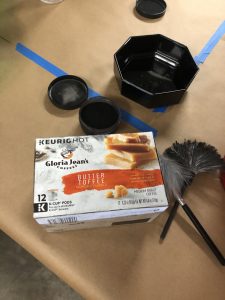 That’s not the case. Utilizing powders, the officers showed us how to dust for fingerprints on paper, boxes of coffee, drinking glasses, DVD cases and aluminum cans.

It was harder than I thought it would be. You have to be gentle with the dusting (You can over-dust!) so that you don’t ruin the fingerprint. Fingerprints are very delicate.

They also showed us how they fume some items–using a fish tank, sticky glue and a hot plate—to gather fingerprints.

It was fascinating to me. And I realized how precise you have to be, because, for an untrained person like me, it was easy to mess up collecting the fingerprint. My swatch definitely had some extra powder on it that would have made the fingerprint hard to read, if this were an official case and I was an actual detective.

Here are a few other things that I learned this week:

>Investigations rely on teamwork. Officers work together to solve a case and utilize resources. For example, while at a crime scene, they may need additional officers to create a perimeter around the scene or they may ask the fire department to provide lighting.  “Investigations aren’t conducted in a vacuum,” Heidenreich said.

>When the Investigative Services Unit arrives, they first have to determine if a crime actually occurred. They can’t investigate something if it’s not actually a crime.

>Investigators have to be good at communication. It’s an important part of their job, whether it’s communicating with witnesses, victims or fellow officers.

>The Investigative Services Unit handles burglaries/property crimes, narcotics crimes, juvenile crimes, financial crimes, sexual assaults and unattended or suspicious deaths. They assign officers to handle each area. Mt. Lebanon has an officer who focuses on juvenile crime and an officer who focuses on narcotics, along with the other investigative officers.

> Video can play a vital role in solving a crime. It can help put things in perspective. But, also, you have to take context into account. If the camera uses night vision, the colors might be distorted. Or, if the quality isn’t good, you might have trouble making out details.

Next week, we’re learning about the Traffic Services Unit, and we will practice conducting a traffic stop.