Sixteen years ago, the leadership at City Theatre conducted a national job search for a new Artistic Director. They selected Tracy Brigden, a New Yorker who worked previously for Manhattan Theatre Club and Hartford Stage in Connecticut. Brigden now lives on Colony Circle in Mt. Lebanon and has helped to build the company into what it is today—a contemporary theater that constantly over-delivers on its programming and raises expectations from season to season.

Just take a look at this weekend, for example. It’s the closing weekend of Feeding the Dragon, a delightful world premiere, written by and starring Broadway actress Sharon Washington, about the true story of her childhood growing up in a library. City is also in rehearsal for the Young Playwrights Festival, running November 30 through December 9, which is City’s initiative to support school-aged playwrights by selecting and producing three middle school and high school plays from a contestant pool of more than 400. Oh, and Bryan Cranston is stopping by on Sunday to chat with Brigden about his new book. You know, Malcolm in the Middle and Breaking Bad Bryan Cranston. 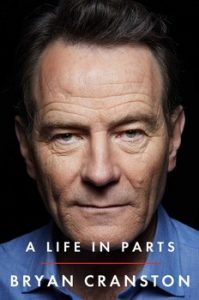 Cranston is on tour promoting his memoir, A Life in Parts, which was released on October 11. The book tells the story of his life and career, both on screen and off, with all the challenges along the way and, as you would expect if you’ve ever seen him in an interview, plenty of humor throughout.

“It’s an excellent book,” says Brigden. “It’s a compilation of great stories from the time he was a child until now. There are some really priceless ones … You know how it’s always hard to find the right gift for certain guys during the holidays? If there’s a man in your life who loves Breaking Bad, this is the right book for him.”

The event, Bryan Cranston in Conversation with Tracy Brigden, is happening at City Theatre’s large main stage venue on Sunday at 4 p.m., and it sold out almost instantly. Brigden is prepared with a list of questions, but she’s excited to just see where the conversation goes.

“There is this one story I’m eager to tell him,” says Brigden. “I did a play with Frankie Muniz before Malcolm in the Middle when I was at Hartford Stage. I had a conversation with his mom one day, and she was saying ‘I just don’t know if we can handle show business anymore. He has one more audition. I don’t even know if he should go’. Well he did go. And that audition was for Malcolm in the Middle.”

Who didn’t love Muniz and Cranston in Malcolm in the Middle? But for Brigden, she likes to see Cranston in more challenging roles. “I thought he was genius in All the Way. He was amazingly transformative as Lyndon B. Johnson, who he played in the play and the film,” says Brigden. “Lots of people are famous movie stars, but they kind-of always just play themselves. But he’s a real chameleon. He can really transform.”

After this busy weekend, City Theatre will launch right into its newest unexpected project, Legends of the ‘Burgh, which the theater just announced on Monday. Pittsburgh native and Law & Order: SVU star Tamara Tunie is coming to City Theatre on December 9 and 10 to perform a cabaret show with local musicians. Brigden’s team is working with Tunie to stage the show, which will feature an array of classic standards and jazz favorites made famous by Pittsburghers.

But events like these—the Bryan Cranston discussion and the cabaret with Tamara Tunie—are all City Theatre extras. Its regular season picks up again in January with the story of an African American boxer in The Royale by Marco Ramirez. Then Brigden gets her turn to direct with The Guard by Jessica Dickey, which tells the story of a security guard at the Met and his connection to the art he protects. Both plays are less than five years old.

“This is our real area of expertise,” says Brigden. “It’s what I love the best. Working on plays for American Theater. New plays do have their difficulties, but in my opinion, it’s far more exciting to be contributing to a new work of theater that will be added to the canon of great plays.”