So apt that a project about love, peace and forgiveness was launched on Valentine’s Day. “What in the World are You Doing?” located at www.tellusworld.org, is a worldwide online contest sponsored by Michigan’s Fetzer Institute and run by Pittsburgh’s Steeltown Entertainment Project. Hundreds of global nonprofits are competing for $5,000 simply by being selected by people who visit the site and vote. Launched on Valentine’s Day and continuing through February 28, the project is the baby of Longuevue resident Lauren Rice.

Browse among 200 video entries from 64 countries including three from Pittsburgh: Southwinds, Inc., Haitian Families First and South Side Anglican Church. 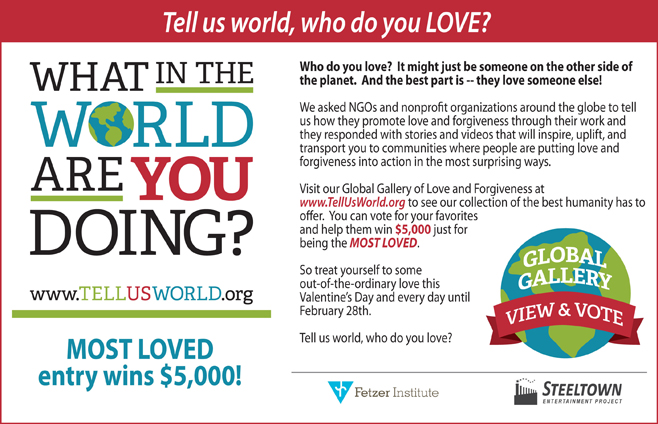 The contest is part of a larger Fetzer project launched in September, where the nonprofits vie for one of two $25,000 awards (one will go to a United States group and another to an internationally based project.) The theme is “How does your work promote love and forgiveness?” Rice says. “It’s been amazing.” Since this fall, she has sifted through hundreds of videos and received emails from all over the world, all with a positive message—something that’s hard to come by these days. “You see so many nice approaches to making the world a better place.”

Rice, who is working for the nonprofit Steeltown Entertainment in a freelance capacity, hopes to stay on with the project and the firm. “There’s so much there that I feel like I could spend the next year going through the videos.” She hopes to announce the fan favorite on March 1.

For more information on Steeltown Entertainment and its efforts to build the entertainment industry in Pittsburgh: http://www.steeltown.org/