The author of this story, David Burrows, is a member of a surprisingly large (and quite dedicated) group of people who consider themselves Morgan car enthusiasts. We published a story about a historic Morgan in his collection, which he was in the process of returning to its original owners in England, back in 2019, and it led to another story about a very special birthday celebration that David organized for another local enthusiast as a result of the first story. Now, this is the final installment of David’s tale about a trip to the United Kingdom, where he visited his old car and toured the Morgan factory.

In the fall of 2019, my wife Judie and I traveled to Great Britain to see the car we had owned for more than 40 years. Earlier that year, we returned our 1951 Morgan Plus 4 four-seater to South London to be reunited with the original owner’s grandson, Tim Steel. Upon arriving at Heathrow airport we immediately departed for our primary destination, the Morgan Factory located in Malvern, England. Malvern is located in north central England close to the Wales border. We wanted to meet with factory historian Martyn Webb and share our part of the historic Steel Morgan’s story. But we also really wanted to see how they are making today’s Morgan sport cars, in a factory little changed over the last 110 years.

After an overnight stay in the English countryside, we arrived bright and early at the Morgan Factory in Malvern, which was founded in 1909 and appears to be almost frozen in time. Judie and I were warmly greeted by Martyn Webb and told that a factory tour was on our schedule. For a Morgan owner, this is like a glimpse of heaven. The Morgan Motor Company currently makes four models including the iconic Morgan Plus 4, a new Morgan Plus 6, and a striking Morgan Aero GT. The company also makes a Morgan 3 wheel P101, which recreates the only type of Morgan made up until the mid 1930s. The prices in 2021 for the Morgan Plus 4 were in the $66,000 to $68,000 range without upgraded accessories. As we entered the first of four buildings, we saw bare chassis with oak sub frames waiting to be pushed down the assembly line. A common misconception I’ve noticed when I show my Morgan is that many people think the car has a wood chassis. All Morgans have steel frames but many use oak sub frames, such as the Morgan  Plus 4. Some of the newer models use high-tech aluminum sub frames, but Morgan still clings to the wood sub frames in many of the current models. We learned that many of the skilled workers in the factory apprenticed with veteran workers so that they could step in to continue the traditions like this one, when making a hand-built sports car.

Then workers assemble many of the mechanical components and the metal panels as the near-completed cars cross the factory floor. With the major mechanical and body panels complete, the car heads to the paint booth. When painting is complete, workers install all trim, interior upholstery and tops to the customer’s specification. The final steps include additional inspections, cleaning and polishing. 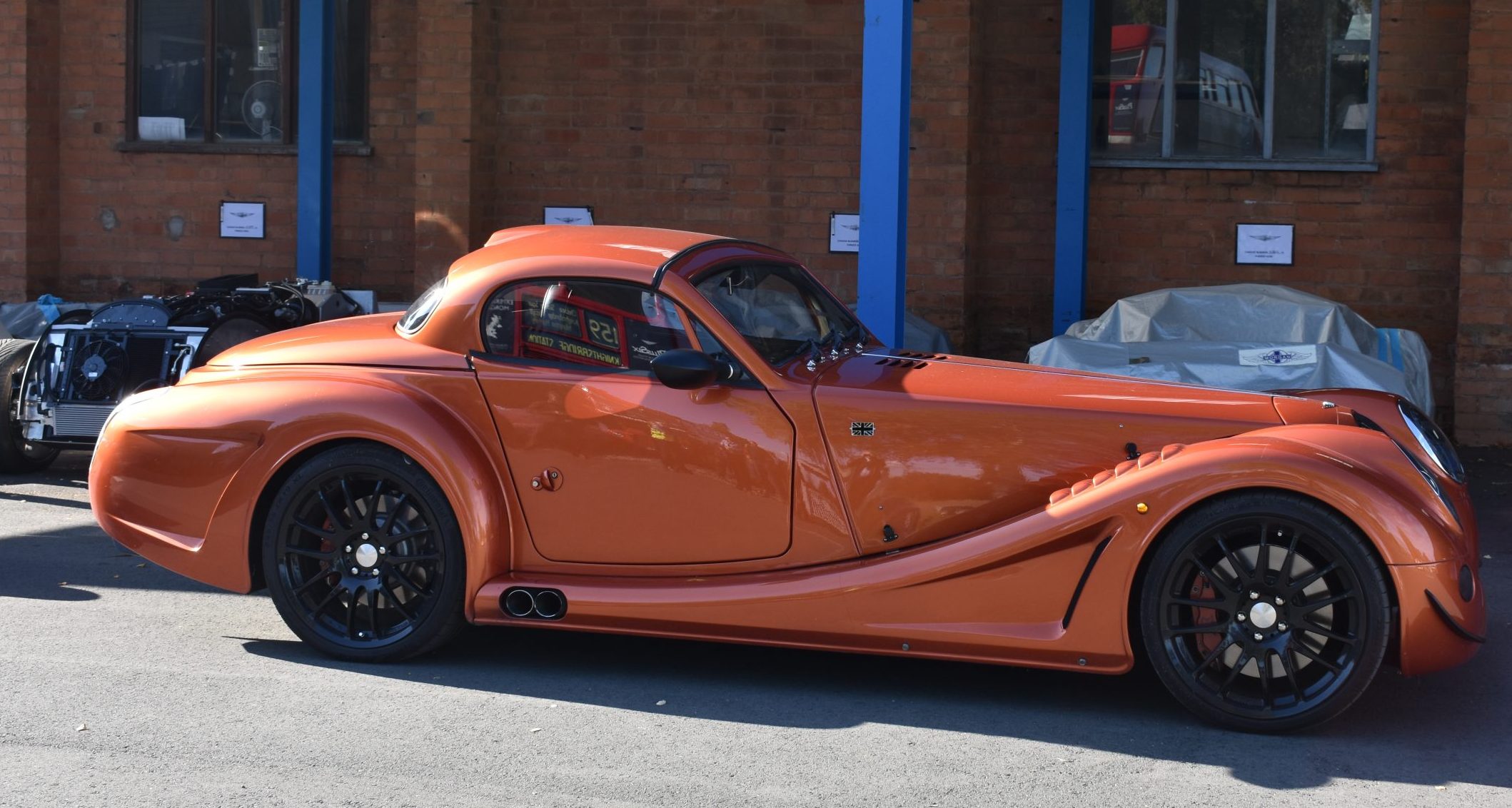 We then went outside, where we saw a completed Morgan Aero 8 GT coupe, resplendent in a striking copper color. We were sad to hear that, after the completion of eight units, production of this model would cease. Next, we visited a factory showroom, showcasing many of the models over the years. Judie and I would finish our visit by presenting Martyn Webb with a photo book for the Morgan Museum, highlighting the history of the Steel Morgan to date. Then, of course, the Morgan gift shop provided the opportunity to buy some reminders of our visit. 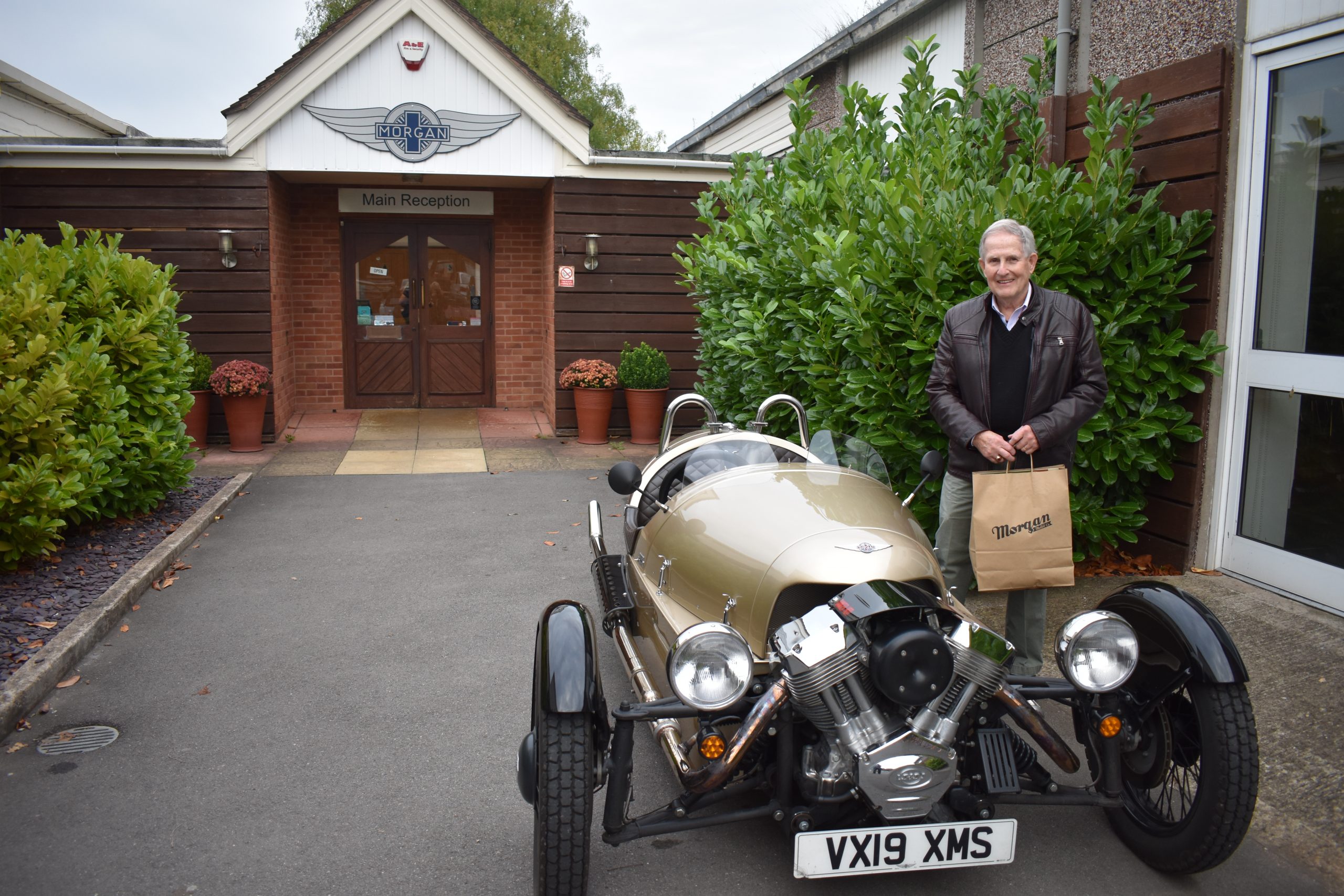 When we left, I was greeted by another delight—a current three-wheel model. As Judie and I traversed the parking area, we also saw a variety of Morgan models that were available for visitors to rent, allowing them to complete Morgan factory visit by driving one through the hills of Malvern. It would be a visit not soon forgotten.

Over the next several days, our journey would take us to Bath, Newquay along the Cornwall coast, Salisbury and finally on to Chilworth, near London, where we were preparing to meet with Tim Steel to see how our 1951 Morgan was faring in its new home. The day after we arrived, Tim surprised us at our hotel. He actually arrived in the Morgan for a drive to his home, which was exhilarating. Tim drove at high speed along country lanes, and Judie and I were impressed by his driving skills, which were probably inherited from his grandfather, Dr. William Steel. Arriving at his beautiful country home, we met his wife Jo, who gave us a warm welcome. We looked at historic photos from his grandfather’s rallying career and heard about how much the car meant to the family. Later in the afternoon, we enjoyed a traditional pub dinner that Tim and Jo had planned for us. At the end of the day, Tim and I took one final photo with our cherished 1951 Morgan before he returned us to our hotel.

So our trip to England was extremely successful, and we’re so glad it happened before the all-consuming COVID epidemic. Judie and I experienced the almost mystical tour of the 110-year-old Morgan factory in Malvern, were reunited with our beloved Morgan, and made lifetime connections with the Steel family.