If you looked at the headline of this story and expected to read about bagpipes, kilts and rousing renditions of When Irish Eyes are Smiling, you are unfortunately mistaken. None of these are actually very Irish, despite all the American St. Paddy’s Day hullabaloo. The Irish do, however, have a host of interesting traditions and standards surrounding a wedding day that are unique—or at least different from what we do here in U.S.

I was delighted to witness many of these at my brother-in-law’s wedding on Friday, August 11, at St. Mary’s Church in Killererin, followed by a reception in Lough Rea Hotel and Spa in Loughrea. A bit of background: My husband, Killian, is from Dublin. He was the best man for his brother, Aidan, who married the love of his life, Eimear, on this incredibly beautiful day in County Galway.

It was my first time as an Irish wedding guest, and this one set the bar very high. The event was absolutely flawless, and more importantly, it was great craic (don’t worry, that means “fun”).

“Irishness” was the general theme of the wedding, because the preservation of Irish culture is something that is very important to the bride and her family. Eimear speaks fluent Gaelic, has been using her Irish name since she was a baby, and the couple even speaks Irish at home with their daughter, Saoirse, who was the quintessential adorable flower girl.

Admittedly, some aspects of this wedding would be difficult to replicate here in the States. For example, after the ceremony, the bridal party was on their way to take photos at the train station featured in The Quiet Man. The newlyweds and a procession of wedding guests with green ribbons on their cars drove through the village near the church, where the bride’s family goes back at least six generations. Some of the locals lit enormous bonfires in front of their homes as the cars went by, to wish the newlyweds luck and happiness—a tradition that is probably specific to villages in northern Galway.

Other aspects, such as the bride’s choice to use green as her wedding color, the vintage car rental and all of the things I am about to mention, would be easy enough for American-Irish couples to incorporate here in the U.S.

So without further ado, here are some differences between Irish and American weddings, as well as some fun ideas for those who wish to celebrate their Irish heritage on their big day! For quick reference, click the following links: The Child of Prague, Everything as Gaeilge, The Exchange of Coins, The Attire, The Cake and The Length of the Wedding.

Feel free to share your family’s wedding traditions, Irish or not, below in the comments!

The Child of Prague

Bear with me on this one … The Child of Prague is a 16th-century statue of the infant Jesus, located in a chapel in Prague, supposedly belonging to Saint Teresa of Avila—you have probably seen replicas or paintings of this famous statue before. In Ireland, replica statues of The Child of Prague are considered very lucky, so it is not uncommon to find one in an Irish home. The statue is considered even luckier, however, when it is headless, but only if the head has fallen off naturally (“Lots of little old biddies ‘accidentally’ knocking baby Jesus off a table,” jokes my husband).

The night before a wedding, many Irish brides will place their Child of Prague statue outside the front door of the house to “keep the rain away.” Through an unexpected turn of events, three different Child of Pragues were offered to Eimear for the night before her wedding, and I must say that they seemed to have an effect: The morning of the wedding was dreary and rainy, and the sun came out the moment she started her walk down the aisle.

Everything as Gaeilge (in Gaelic)

From the invitations to the wedding programs to the many of the songs, prayers and readings at the ceremony, the Irish language was used wherever possible throughout the day. The printed wedding materials featured traditional Irish fonts, including one found in the Book of Kells, an ancient Latin gospel book illustrated by monks that is now on display at Trinity College Dublin. 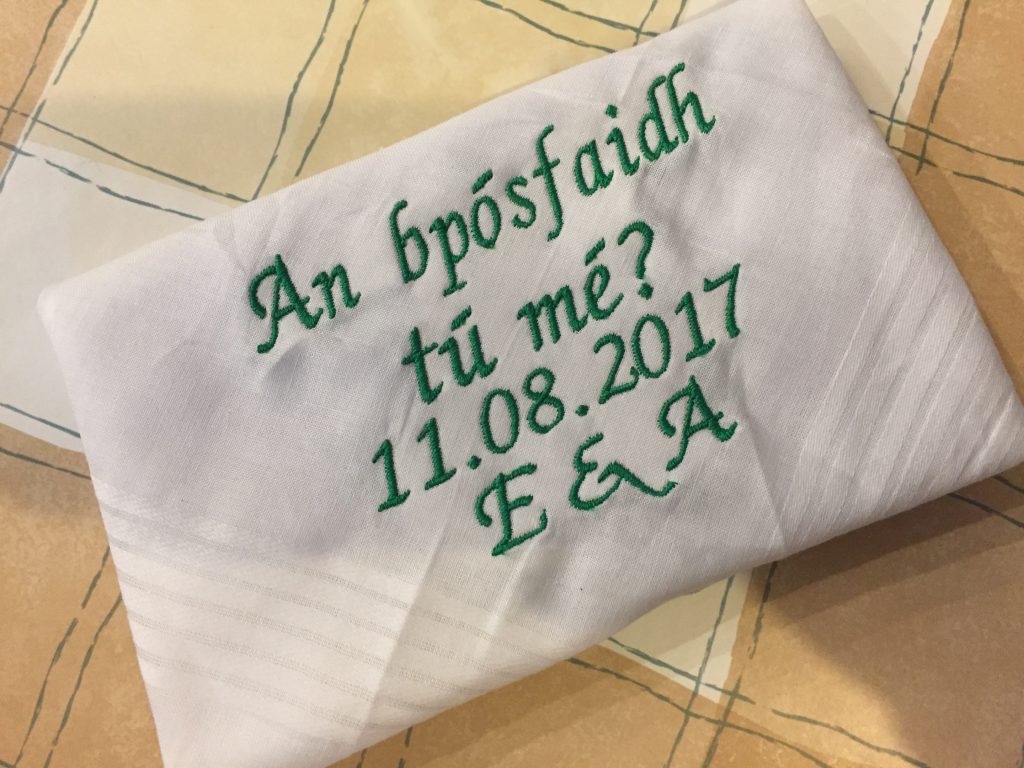 Aidan also presented his bride-to-be with an “Irish wedding hanky” the morning of the wedding. For this Irish tradition, the bride carries the hanky on the wedding day, and then later it is made into a baby bonnet for their first child. In keeping with the theme of the wedding, Aidan chose to have “Will you marry me?” embroidered in Gaelic on the hanky, which was even more significant because that is how he asked her (in Irish) when they got engaged more than four years ago.

For an example of the Irish language, click below to hear a short clip of the Offertory hymn, Ag Críost an Síol, sung in Gaelic during the ceremony.

The Exchange of Coins

After the Declaration of Consent and the Blessing of the Rings is something so quick that you could miss it if you blink, but it’s still very interesting: The Exchange of Coins. It’s optional, like the unity candle, but many couples still choose to do it. Aidan and Eimear chose to use 1916 Commemoration Coins as their “tokens of all they possess,” but from what I understand, couples can use pretty much any type of coin. The exchange is a centuries-old folk tradition that represents the combining of the newlyweds’ possessions under one household. 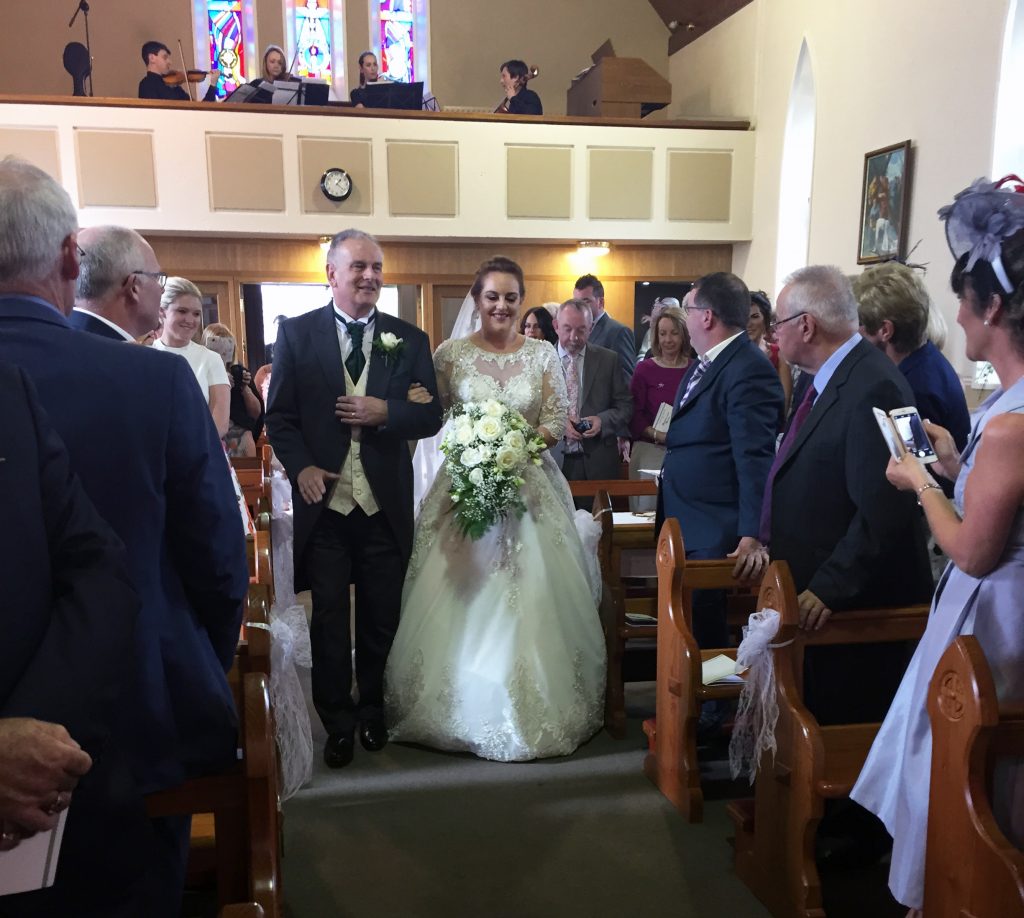 Let’s start with the beautiful bride! When I asked Eimear about her dress before the big day, all she would say was, “very very very traditional! In fact, it couldn’t be more traditional. Think 1950s bride.” My mother-in-law, Joyce, echoed the sentiment by pointing out that Eimear chose a very Irish style, with lots of lace, beading, embroidery and a gorgeous train. The dress was from Ronald Joyce, a UK-based bridal shop, and it was stunning!

Now, if you can’t guess what color the bridesmaids wore at this point, you probably haven’t been paying attention. The Chief Bridesmaid (aka Maid of Honor) and her crew wore long, flowing green gowns with keyhole backs and empire waists, similar to what you might see bridesmaids wearing here in the States. One interesting difference in wedding etiquette is how the dresses and tuxes are acquired—the bride and groom always pay for the bridal party’s attire. All the bridal party has to do is show up for the fittings. Bridal showers are also not common practice in Ireland, so really, the core responsibilities of the bridal party only include organizing a Hen Party (Bachelorette Party) or Stag Night (Bachelor Party), and then showing up on the day of the wedding to enjoy it as an honored guest and to help out wherever necessary.

For the groom and the “dads and lads,” Eimear chose tuxes with tails and green cravats, something that she says is a dying tradition, as many Irish couples today are choosing a more modern look for the groomsmen—”the navy suit, brown shoe look,” says Eimear. The groomsmen attire at this wedding was Irish all the way down to the green dress socks and cuff links featuring golden harps.

Finally, we have the guests! You might have noticed from the pictures of the congregation above that ladies in hats are to be expected at Irish weddings. While hats are certainly not required, it is safe to assume that more than a few guests will choose to wear a hat or a fascinator to the ceremony, and they will leave them on until the reception, when they are finished with dinner. Another difference between American and Irish wedding guests is the fact that the Irish, generally, tend to be more formal in style. Some guests will even book blow drys, updos, nails or makeup appointments the morning of a wedding, even if they aren’t part of the bridal party. 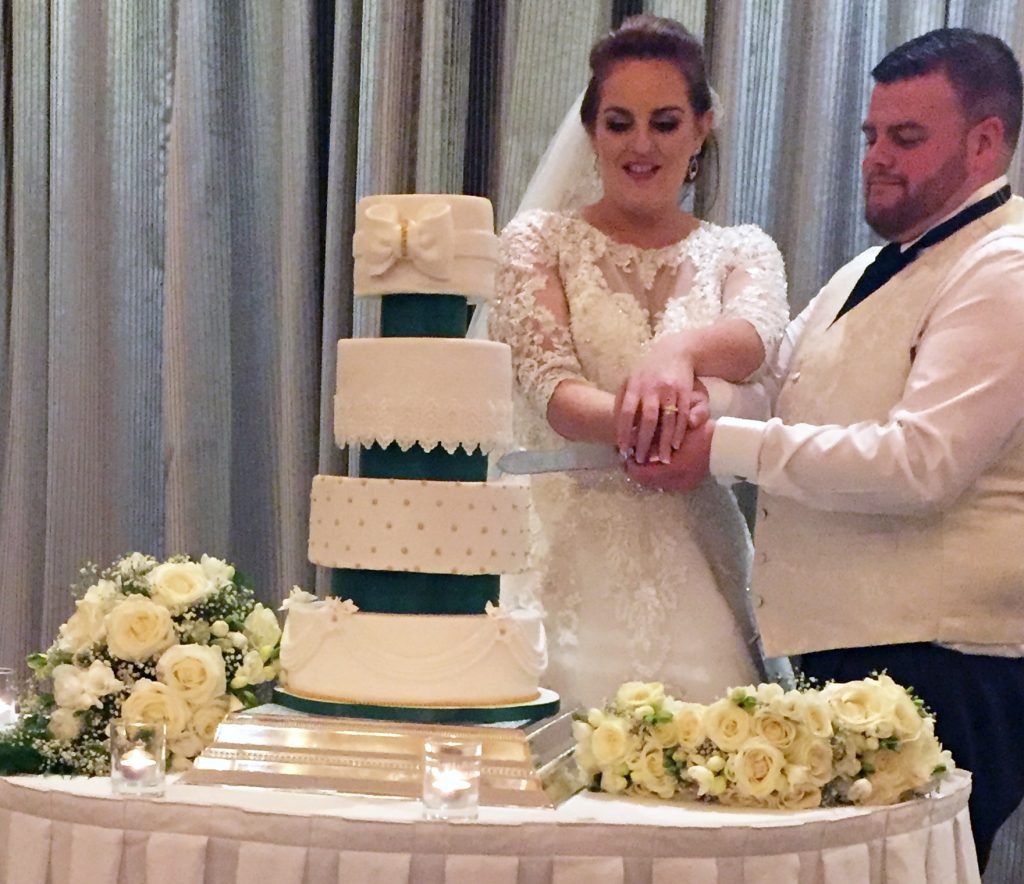 The traditional Irish wedding cake is actually a fruit cake. Couples often choose other flavors nowadays, but many will opt to use fruit cake for one of the layers, and then they save it for the christening their first child. The cake at this wedding was four layers: one red velvet (the bride’s favorite), one lemon sponge, one chocolate biscuit (a very popular flavor) and the final was a fruit cake—for tradition! If you try to adopt the fruit cake tradition here in Pittsburgh, be warned that you may be forced to bake the fruit cake layer yourself. My husband and I visited numerous bakeries before our wedding in 2015, and we were met by blank stares every time we mentioned replacing the top layer with a fruit cake.

The Length of the Wedding

Apparently there is one famous trait shared by all weddings in Ireland: they are LONG. For example, this wedding began at 1 p.m. on Friday, August 11, and it ended sometime around 5 a.m. on Saturday, August 12. But that’s not to say that it was boring—quite the opposite! The activities of the day changed every couple of hours to keep the guests entertained.

The day obviously begins with a ceremony, and just like here in America, guests go to the reception venue for cocktails or a brief drinks reception before dinner. Dinner is where things start taking some time, as five courses are common, and the cake cutting happens at the end of the meal.

Wedding speeches come next, and they are notoriously lengthy in Ireland. In fact, it’s a fun game for guests to reach into their pockets, throw some Euros in the middle of the table and wager against each other on the exact length of each speech. Usually the father of the bride, the father of the groom, the groom himself and the best man will speak, though some weddings have more. My husband’s speech (which was excellent, if you will permit me to brag) was somewhere around five minutes in length, to the detriment of the gambling guests, many of whom were used to a 10-minute-or-longer speech from the best man.

The cash bar begins after the speeches during most Irish weddings. At this one, a band played from the end of dinner until a little after midnight, and this band played everything from pop music to waltz sets, foxtrots, quicksteps and jives. I particularly enjoyed the Céilí—which is essentially the Irish version of line dancing (shoutout to Eimear’s family member who took the time to teach me how to twirl. “Think Jack and Kate in Titanic,” she said! And it clicked). My family was surprised by the amount of American country music that the band played. Apparently it has a decent following in Ireland. Even the first dance was to a country song!

The DJ started after midnight and played until the reception began slowing down, sometime around 2:30 a.m. Obviously, this is different from how things are done here, where couples sign a contract for a four- or five-hour rental of a reception venue without one extra minute permitted. At this time in the morning, many of the guests, including myself, retired to their rooms for some sleep. But those who still had some partying left in them were invited to the hotel bar (or “resident’s bar”), where guests could continue to be served drinks, and they were invited to bring their voices and their instruments to participate in a “sing song” of traditional Irish music.